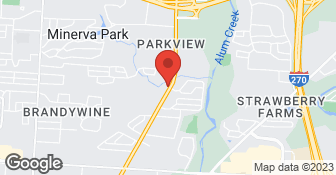 10 EMPLOYEES. USES SUBS FOR LABOR. COST IS DETERMINED BY THE JOB. TRAVEL CHARGES MAY APPLY. NO SERVICE FEES. EXTRA CHARGE FOR 24 HOUR EMERGENCY SERVICE APPLIES. MAY CONTACT BY EMAIL.

It is now October and I have yet to hear from them, despite me calling them several times. I have yet to receive any kind of courtesy call.

Description of Work
I contacted the company in regards to a project with my front porch. They informed me they would follow up with a written estimate. This was March 17th, 2016.

For the most part the experience went well. The work was not began on the scheduled date and a couple of times those doing the work did not come until hours after they were scheduled. A couple of times, my son-in-law had to tell the workers to re-do some parts of the work.

Description of Work
Patio was put in and remaining yard leveled

He said that he guarantees his work. Sometime between June and September I noticed a crack in the cement. I called him the day that I noticed it. He came out to look at it, and told me that “cement cracks.” He did say that he would come back to seal it, but he hasn't done that yet and it is now October.

Description of Work
He provided us with a concrete driveway.

The bi-fold doors that were supposed to go up weren?t put up properly. The floors were uneven and he wanted to raise my kitchen floor to match the floor that had been put in for the addition. The bathroom floor is still not level. The dryer plug was put in upside down. The deck was not put in properly and some of the wood was not even outdoor wood. The storm door that was put in for the addition does not even secure properly, and the handle does not even hook when closed. The windows were not caulked at the bottom. The screws in the laundry room for the shelving are mismatched, some black and some silver. The addition was done terribly and the keys to my home were even given to his employees when I had asked him not to. I was even locked out of my home one night after he had done some work. He said he would give me a years gaurantee on the job, but he does not follow up on anything. The hinges on the storm doors are already cracking because they were hung incorrectly. I had to have my son put in door stops and other things to finish the job as Sonny did not appropriately do this. The foundation in some places does not even have concrete and there are gaps in it and butter joints were put in instead of strikings, which no one I've spoken with has heard of using this type of joint. The gutters on the east side of the home are not even tilted toward the down spout. The weatherproofing was done above the ground level and painted to cover the black color and the paint is alreayd pealing. Everyone that I have had come out to look at the addition can see that the work was done incorrectly and poorly. I want to let other members know that he does not do what he says he's going to do, he should not be given permits to do this type of work or any other construction work. No one should ever have to deal with the stress that this company puts upon their clients. UPDATE 4/20/13 I was awarded $6900 via arbitration through the BBB, but he refuses to pay this. At this point the Attorney General's office is not able to help further either. My only choice is to pursue legal action. UPDATE 5/8/13 I filed a complaint with the municipal court to collect the money awarded to me through the BBB's arbitration. UPDATE 9/4/13 I have a 2nd court date set up for October 28, 2013 to pusue collection of the BBB arbitration.

Description of Work
Dimaggio inc added an addition onto my home and also put a deck in.

I thought this would be a relatively straight-forward task. But the owner and his two workers showed up sporadically, leaving the job undone for nearly three weeks. Then, after the fence was installed, the city of Worthington notified company that fence had been installed back wards. So the workers returned, but merely turned the pieces facing outward toward the inside of the yard, resulting in uneven gaps in the fencing at the bottom. This allowed my dog to escape from the yard! Terrible job. When I complained about the uneven work--including the large spaces between the ground and the bottom of the fence, and some crooked fence posts, the owner of the company said that he had already expended enough time on the job, and that it was time to cut his losses.

Description of Work
Installed wooden fence around perimeter of backyard.

Give your home a new look with a fresh coat of paint! We provide painting solutions to residential and commercial customers throughout Columbus and Central Ohio. Tailor-made proposals customized to each project ensure that you are getting the best services for your needs and quality results, without all the upcharges later. We specialize in interior painting, using drop cloths, plastic and tape so that paint only ends up where it belongs. The best paint finish is made with the best preparation. We provide drywall and water damage repair to give you that flawless finish. Call us today to give your home a fresh new look or find out more at absoluteintegratedsolutions.com!  …

DiMaggio Construction Inc. is currently rated 2 overall out of 5.

No, DiMaggio Construction Inc. does not offer eco-friendly accreditations.

No, DiMaggio Construction Inc. does not offer a senior discount.

No, DiMaggio Construction Inc. does not offer warranties.