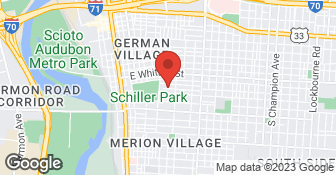 This husband and wife team were very nice and attentive, until they got the down payment - 50% of the total cost. After that, they NEVER arrived on time. At one time they told us they wanted to meet with us at 6PM, if I recall the time, so my wife and I decided not to eat dinner until after they left. They showed up at 7:30PM, never calling or answering our calls, and the woman told us she was hungry so they stopped to eat before seeing us. Many days, they would not show up at all - when they said they would - and then other days they would show up when we weren't expecting them. They were rude to my wife - particularly the woman - who would order my wife to buy materials "right away", and then after she complied they would wait weeks before using the materials. The woman would sit in our house and read our newspaper, tried to use our computer service, arranged our own things in some of our kitchen drawers and cabinets, and one day when I stopped by the house to check on progress she had just come off my roof - using my ladder and without my consent - and told me I needed a new roof. We terminated the contract when it was about 75% done at which time the husband used threatening language and actions as he was taking his tools out of our garage - pointing at me and saying he'd return if he had a mind to. For awhile after this incident, I was concerned about the welfare of my wife when she was alone at the house. This feeling was exacerbated by the derogatory remarks he made about my wife (and his own, by the way) during the course of the work. They seldom cleaned up when they were done, and when they did it was done poorly. We found broken glass slivers on our kitchen floor - we have dogs. They would leave their tools on the kitchen counter at the end of the day. They did their sawing in the kitchen and never attempted to curtain the kitchen off, even though we have a pocket door at one of the two entrances. We had dust everywhere, and spent about 20 hours just cleaning shelves throughout the house. In addition, my wife who comes home from work before I do, had to clean up every night. He also tracked debris down into our downstairs bathroom - mastic from the tile work was on his shows and hands and it was everywhere, floors, kitchen sink, etc. Our garage was a mess - piles of debris in the corners were never removed. We signed the contract in late June. The contract called for completion of the work by the first week of August. We terminated the work around October 1 when it was about 75% done. It seemed as if we were their lowest priority, or they just didn't know how to do the work. It seemed as if this was the first kitchen work they ever did. The cabinetry drawers didn't pull properly, The tiles were chipped, uneven and littered with grout. (Subsequent contractors - who completed the work in just a few days - told us that he used the wrong saw blade.) He pulled some of the glaze off our tile floor, and the shine off our hardwood floor because he taped the protective floor covering to the floor with duct tape. He was unable to properly refinish the wood butcherblock cooktop surface - rough with blotches of stain throughout, particularly along the sides. He worked at this for days. (It took another contractor a few hours to sand it down and refinish it.) He completely butchered the kickplate which was unattached in some areas, not abutted in others and uneven throughout. They didn't know how to match the trim under the cabinets, couldn't remount the button for the disposal, failed to secure the diswasher (which leaned out when we used it and tore the rubber gasket along the side), had two peices left over after installing the oven with no idea what they were to be used for, didn't mount the sink properly onto the countertop (it was crooked). And all the while he never took responsibility for the problems - blaming the subcontractors, his wife, or my wife for everthing that went wrong. I have never written anything like this before. I like to give the other person the benefit of the doubt. But in this case, I am compelled to do so in order to keep others from making the same mistake.

Description of Work
He had to level the basement by pouring concrete and add support beam structure. He also put down new ceramic tiles. He also installed some drywall for us.

Description of Work
He put in ceramic tile for a bathroom remodel he did for us. He also did a glass tile backsplash in our kitchen.

Description of Work
We had removed old wallpaper and he repaired the drywall for us.

Description of Work
They replaced all the windows in my home.

He did a very good job. He was on time and was neat and did the job in a timely manner. I was be using him for multiple projects around my home. I truly love the gas logs as they are no mess for us to clean up after.

Description of Work
He removed an old wood burning fireplace and installed a gas fireplace for us.

We were very pleased with Bobby's devotion to our happiness in the projects. Not only was the work done quickly and professionally, he checked constantly to make sure the appearance was exactly what we wanted. The project took about 3 weeks. We appreciated their punctuality and hard work, and they were very polite and cautious about entering our home, respecting our privacy. We will hire Bobby again.

We specialize in all phases of remodeling for your home, business, decks, bathrooms, kitchens, finishing basements, and more! We guarantee your satisfaction, and we won’t leave until the job is done right. We pride ourselves on the quality work we provide, while delivering great customer service! Check out all the services we offer below and call -or- click to schedule a free estimate today!  …

We specialize in everything Home Remodeling and Maintenance Services. We have skilled teams for all of your home's needs including: Drywall, Painting, Flooring, Plumbing, HVAC and more. If you are looking for a one stop shop for all of your home projects, You are in the right place!  …

Owner-operated company serving Columbus and Dayton surrounding areas. We are a full-service provider of interior and exterior painting. We have built our stellar reputation by providing quality painting services, expert customer service and reliability to our customers.  …

Accu-Spec Construction Services is currently rated 4.4 overall out of 5.

No, Accu-Spec Construction Services does not offer eco-friendly accreditations.