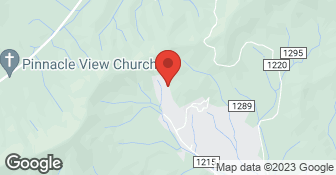 Horrible. I was repeatedly assured the job would take "one week" to do. It was 5 months later when the bulk of the job was done and the landscaper left and hasn't been back to finish. Despite numerous calls mulch was never delivered as promised; after waiting a month I bought mulch myself and put it down. From the very start my phone calls were ignored. When I did get a call back I was told they would be out "tomorrow", but they never showed up. When they did come out it was usually after 3 PM and they would get 2-3 hours work done. The quality of the work was mediocre, not the work of a professional. Ryan will tell you how good he is, how fast he is, how much he knows, but you wouldn't know it from the poor job he does. My driveway which was in excellent condition is now all cracked, patched, covered with concrete spills. Ryan assured us that they'd clean up at the end of every day so you'd never know they were here. That never happened unless we went out at the end of the day and insisted they clean up. Because they didn't clean up, our rain drains at the bottom of the drive clogged up with dirt and sand from the job. We cleaned them out at least 5 times over the duration of the job to prevent having the garage flood. For months after he left , I did 'damage control', trying to fix things he messed up. Construction debris was mixed in with the soil used in the flower beds and in the grading of the lawn. I picked out many, many buckets of stone that was used as the base of the walls, as well as buckets of cinder block chunks and rock, some as large as 10", all from the lawn and flower beds. Every time it rains, more rocks surface. There was damage to surrounding property; there was little regard for my property in general. Fencing around my vegetable garden was crushed along with support poles; plants in other beds were trampled, crushed or disappeared completely; receptacles were pulled out of the wall; outside lights crushed; concrete hand prints on newly installed trim work. Overall, it was a miserable experience I wouldn't wish on anyone.

I understand it was a long process to finish your project, but because of the weather it would have been a disservice to put up a wall during freezing or wet conditions. Your wall would have started failing within a few years and would have to be re-done. I did speak with your husband about the driveway damage before we started and offered to re-seal it but your husband said he needed to get the driveway re-done anyway since it was only 2in thick. This type of work can cause damage to the site, for a larger budget, we could have calculated how much it would have cost to mend the damage, but not with this budget. I'm surprised at your writing, we had worked so hard with you and you told me how happy you were with the work. We did it for an exceptional cost to fit your budget and even added an extra wall and steps. I do take fault for the mulch, let's work that out.
1.0

Never finished job after being paid. Used under paid guys who knew nothing about masonry.

Description of Work
Mr. Endres quoted us a retaining wall job in October 2016, we paid half. He began the job regularly for two months, then began asking for money for the rest of the job. By January 2017 we were calling him to see when the work would be finished... September 2017 we take him to small claims court where we won the judgement against him.

I was very impressed with Greenscapes Landscaping. Ryan the owner was very nice and went above and beyond to assure my satisfaction. He worked with me around my schedule and was flexible about my finishing touches. They started out doing my landscaping and I was very happy with the work and learned they do construction as well. He then put down new floors throughout my house and I was shocked at how great they look. I had gotten some quotes and Greenscapes were cheapest one and I am very happy I went with them. They were very fast and I love the results! I would definitely recommend them

Description of Work
They built two retaining walls and completely landscaped my yard. They also remolded by house including putting in hardwood floors and tile throughout.

Veteran owned and operated. We have the experience and the dedication to bring your dreams to reality! We guarantee your satisfaction, and we won’t leave until the job is done right. Call or click to schedule a free estimate today!  …

Royal Park Tree Service and Landscaping has been in business since 2013. Our work has style, distinction and beauty. Our team has integrity, many years of experience, character and respect for the environment. We are integrating many new water conservation products in our service line. We want to do our part to conserve this precious resource and use it wisely to protect your landscape. We enjoy teaching our customers about new landscaping solutions that can solve problems or allow them to dream and create the property that they are excited to come home to. Call us today. We are here to help.  …

How is Greenscapes Landscaping overall rated?

Greenscapes Landscaping is currently rated 2.3 overall out of 5.

What days are Greenscapes Landscaping open?

No, Greenscapes Landscaping does not offer a senior discount.

Are warranties offered by Greenscapes Landscaping?

What services does Greenscapes Landscaping offer?