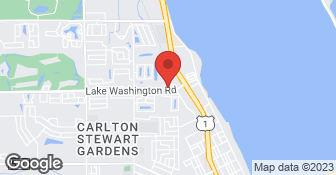 Shutter Outlet is one of the oldest hurricane shutter companies in the state, originally founded as a Florida corporation in 1971 by a group of engineers from Harris Corporation. Since then we have earned a rock-solid reputation by manufacturing, selling and installing only the finest quality storm and security shutters available. This reputation is backed by warranties and customer service second to none. For many home and commercial building owners, as well as leading building contractors their only choice to protect their windows and other openings is Shutter Outlet. You also can feel confident that shutters and storm panels from the Shutter Outlet will stand up to the worst of nature's furry....

I placed the order on June 2, 2017, I was told it would take 6 to 8 weeks. I finally got them installed November 24, 2017. They never called me about the delays, I always had to call them. I tried to cancel the order in September ( called them 2 more times after that), they said I would have to talk to the owner, I asked to have the owner call me. the 3rd time calling to cancel, I was told that the owner had decided that he would not cancel any orders. The owner never called me. on the day of install, the amount that I would quoted was different then the amount owed by 102.00. None of that is on the receipt. I was then told that I would need to speak to the owner, the owner was not available and would have to call me back. I just wanted the shutters installed, so I had to pay their price.

They came out and did service. Did not do everything their website said they would do. Had a broken lock on the accordion shutter and they did a questionable replacement of the lock. Does not seem securely installed and does not stay locked. They have never been able to give us any specs on their own shutters. Don't know how that is possible. They supposedly built them. Called them on Sept 5th because we had a roll shutter we could no longer open and some of the accordion pieces had slid down out of the top track. Unfortunately we had Hurricane Irma coming through the following weekend and they said they could not get to us before then but would call us later to schedule service date. Never heard back and called them again on 10/2/17. Spoke with Rosette and found out they had never opened a ticket in September. She opened a ticket and indicated someone would get back with me in a couple of days to get me scheduled. Again did not hear back. Called again today, 10/6, and again spoke with Rosette. She can not give me any time frame for when they can get to me. Already scheduled through the end of October and apparently can't schedule past that point.

Description of Work
Purchased a condo that had their shutters already installed. We hired them 6/2/17 to come out to perform maintenance on all shutters to make sure they were working properly. Doing this supposedly gave us a 1 year extended warranty that they would fix anything that broke for one year. We also wanted to find out what the storm ratings were on the shutters so we could potentially get a discount on our condo insurance.

Description of Work
Put up Shutters for Irma

They were horrible. I wrote down my contact with them before I went back to Florida. My husband is hard of hearing and we had everything spelled out. They came back later and said oh instead of doing the wrong kind of shutter it would be one big shutter. They jacked up the shutters close to $6,000 and they did all kinds of things. They were horrible. Because my husband doesn't hear very well he just thought he was completing what I had already signed. They were charging us more than $2,000 from the contract that I had set up with them. They never came for two or three months. It was just one horrendous, horrendous, horrendous experience. We already have hurricane shutters; we just wanted the cream type because it was much more convenient when we weren't there the whole year, just part of the year. They changed the contracts. They said oh, you really need something different, like the one big one that cost like $1,000 more. It was two other ones and they said well, we can't do it that way you need something else. Which was a lie. My husbands hard of hearing and also he has early onset dementia. He did not remember, and I wasn't there. He'd already gave him the check of $3,000. So, whatever it was he ended up paying, and I looked at all the papers. We ended up pay at least $2,000 more than what the original contract had and they did not do all of the windows. So, we were out of a heck of a lot of money. I wasn't there I was taking care of my daughter who had brain surgery. It was very easy for them to trick him. I called them. They said we will put a lien against your house, and I said go right ahead. When they came back out and changed it, they had my name and them. I said I'm sorry, but my husband signed that and you had no contact. The contact said right at the top and my name, and I am in Virginia at the time. They did change the one thing. They cracked our front tile.We have ceramic tile in our enclosed foyer area in the front. It was just one big nightmare. If they kept what they said, it would've been okay, it was about average. Again, it's all about the game. He said the end of the year we would come back out to make sure all of our measurements are okay. It wasn't the same person that came out, it was a high pressured salesman. They came back and told him, oh it would be much better to get the one that came all the way across and closer. It was thousands of dollars more. They had already said that to me and I said no way. I didn't really see the shutters; I supposed they are fine. They broke our tile when they were drilling they did a bunch of stuff. It was supposed to be a month; it was four months.

The shutters are very nice and as ordered, the sales person was terrific. However, follow-up left a lot to be desired. It was extremely difficult to have workman return for follow-up needs. As a last resort I called my salesperson who got the needed work done quickly for me.

Description of Work
Installed accordian hurricane shutters at condo. Sales rep Bill was an hour late for appointment with no call indicating delay. Building permit was not provided at the time of installation and Bill indicated would have the next day. After three weeks no return calls from Bill. Had to drive to office and threaten to cancel payment before building permit was provided. Absolutely no appology from Bill. On the positive. The installers were excellent, actually a little early, did an excellent job and if they were working for another company would have them install shutters on 2nd house

Hurricane and storm shutter protection to homes and businesses. The showroom displays all of the shutter options that we fabricate, install and service.