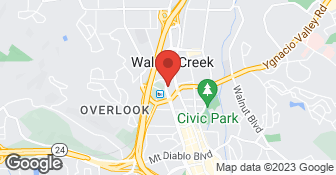 The asphalt was removed in a day by one crew. A few days later another crew installed the pavers we had chosen that had arrived by truck after laying a weed barrier and prepping the ground etc. Paula had designed a subtle border for us. This installation work took about four and a half days. It was very hot, but the crew did not complain and worked long hours. Then Paula and her husband came on a Sunday evening and sealed the driveway to help prevent weeds and oil stains. I was very fussy about exactly which type of sealer I wanted and they got it for me. We have had compliments on the driveway and pathway, and we are very happy with the final result. I had done a lot of research and I feel very confident to recommend this company.

Description of Work
We had a very long asphalt driveway that was badly cracked and also bumpy in places. It needed to be removed, and we wanted pavers installed instead since they last forever. Paula was wonderfully responsive and helpful throughout. I had several estimates from different companies and Paula was the last person I saw but we chose her and Atlas Pavers. We went to Atlas Pavers in the East bay and also checked out some driveways they had paved. Then I decided to also redo a cracked concrete pathway on the side of our house plus two steps, and those also with pavers.

Great company. They weren't the cheapest, but still very reasonable. The workers were very easy to work with.

The workmanship was of the highest quality. As a retired from a career that include commercial real estate management, I found their work to be at the highest level I've ever experienced. Their staff are very courteous, punctual and knowledgeable. Their pricing was a value. I highly recommend Atlas.

Description of Work
Atlas has installed two separate patios in my back yard.

First, there are not enough superlatives to bestow on Atlas Pavers as a company, its employees, owners or the quality of their work. With that said, let me share some examples of their outstanding professionalism, skills, commitment to their customers and deep understanding of a project’s need. After being informed in August of 2016 that my 1930s home needed drainage to preserve its foundation, months of research began. Not only did I have to find and decide on which company was proficient in drainage, I also had to decide on replacing the aged and broken concrete with more concrete or pavers. Learning that pavers would be better long-term—since it’s known the Bay Area has earthquakes (small tremors to large quakes)—I chose pavers. Next came deciding which company could do the work in my area, keeping in mind that the primary focus was on drainage and appearances secondary; thus, leaving only two companies on my list. Knowing the project was large: grading, two retaining walls, steps, a walkway and driveway…I believed the smaller of the two to be less knowledgeable and unprepared to handle the job, so, I chose Atlas. Jeanne, Atlas’ Design Consultant, was not only pleasant to work with, but understood the goal of the project was drainage; giving me total confidence in my decision to go with Atlas. Within a week, Jeanne returned with a specialist, Radek. Radek not only saw the problem right away and began planning on how to correct the issue of standing water against my foundation and under my house, he explained everything to me in a through and professional manner—never once talking down to me, in that “little-woman” voice so many contractors use. Together, the three of us developed a plan and design for the project that fit my budget—something that is rare when working with contractors! Work began in late November and finished just before the rain began in early December—a total of three weeks. Junior, the Chief Operating Officer, was on-site every workday morning. The crew was efficient and friendly—they carried my groceries in for me since I had to keep my car on the street. They also fitted the five down spouts into drains, and several hidden French drains behind the retaining walls carry water to the main system, along with a drain in front of a basement door and end of the driveway. When they encountered an unexpected plumbing problem, they informed me and called a plumber immediately. When I discovered leaking faucets, there was no problem, other than rainy days, for the same plumber to return and fix the aged faucets. After all the rains this winter, there has been NO standing water against nor under my house, no sagging of the driveway, and the design is subtle but consistent with the era of the house. Overall, I am extremely pleased with the quality of the work from the Atlas team…I only wish they gave lessons to other contractors.

Description of Work
This company does not perform work in my area.

Atlas Pavers came highly recommended so I didn't think twice about hiring them to do the work.The crews were prompt, very hardworking, and worked quickly and efficiently. I was certainly not disappointed, since Junior and his crew were very knowledgeable in their assessment of what needed to be done, professional in carrying out the work, and admirably neat in cleaning up once the job was complete. I've worked with several contractors and, frankly, expected to be doing a lot of cleanup once the job was done. Not the case with the Atlas Pavers crew, who left everything clean and tidy and ready to use. About 6 months later, I had to have Atlas return to help clean up some spilled concrete accidentally left by another contractor. I wasn't sure Junior and his crew could do anything about it, but thankfully, they were able to powerwash the entire patio, removing all evidence of the concrete. I had them apply a few coats of sealer to help protect the pavers. I'd highly recommend this additional finishing touch as the pavers looked even more beautiful. I'm extremely happy with the results and recommend Atlas Pavers without hesitation.

Description of Work
Installed pavers in front and back of house and sealed pavers. Front work was to replace pathways and back was to replace and properly grade back patio for drainage (they also installed a new drain in the middle of patio). Estimate was very reasonable and they did not try to charge more when concrete patio was difficult to break up and made demo slower than expected. The quality of the paver work was very good. Came back to do additional cleanup due to sand sticking in a door and some other areas needing finishing around edges. After a final cleanup, all looked great, was sealed, and drainage has not been an issue during the rains.

They did a beautiful job. They were very good at customer relations and if there were something that wasn't quite right; he was just like no problem, will just take that out and they were able to fix it. They were less expensive than their two competitors and they threw in a little extra work that the others didn't.

Description of Work
Atlas Paving's and they did paver for my driveway. It was two walkways with pretty high priced materials.

Overall Atlas did a great job and were very easy to work with. We had a few glitches that needed resolving such as a broken electrical line and a material delivery problem. However, Atlas responded very quickly to all off our issues and resolved the matter without question. Atlas had the lowest price and was able to start the project the soonest. I would definitely work with them again.

Description of Work
Pavers on driveway and walk way

Atlas Pavers did a first rate job replacing our driveway. Their quoted price was the lowest of three bids we received and they were by far the friendliest and most courteous to work with. Per my request they easily made a last minute adjustment to the grade of my driveway. The entire job took about 3 days to complete and all went very smoothly without any surprises. We couldn't be happier and would highly recommend to anyone looking to replace their old concrete driveway with beautiful new pavers.

We have the experience and dedication to get the job done right! Specializing in landscaping services; We guarantee your satisfaction, and we won't leave until the job is done right. We pride ourselves on the quality work we provide, while delivering great customer service! Call or click for your FREE estimate today!  …

We specialize in complete landscaping, concrete on walkway/driveway/broom finished and stamped, retaining walls, fences and gates, sprinkler/drip/drainage, sod installations. We have been in business for 15+ years started off with just father and son bonding and we found love and passion to build a business together with a good team on our side we can help our customers in need.  …

Atlas Pavers Co. is currently rated 4.9 overall out of 5.

No, Atlas Pavers Co. does not offer eco-friendly accreditations.

No, Atlas Pavers Co. does not offer warranties.