Should I Remove Trees to Install Solar Panels?

Trees hinder solar energy production, but with trees' environmental benefits, is it OK to cut them down?

The more solar energy your system produces, the greater its financial benefit to you and its environmental benefit to the planet. Trees — or more specifically, shade from trees — reduce the productivity of a solar energy system. However, when you cut down trees, you eliminate a valuable carbon dioxide (CO2) capturing organism.

So, is installing solar panels worth the trade-off of removing the carbon-absorbing trees? Before recommending this drastic step to homeowners, I did the “tree math” to find out.

How much CO2 does one mature tree absorb?​

The DOE provides data for many different ages and types of trees, since the amount of carbon a tree absorbs depends on the tree’s species, size and growth rate.

For my calculations, I used the rate of a 30-year-old eastern white pine (Pinus strobus), which is common in New England backyards. I calculated: A 30-year-old tree absorbs 193 pounds of CO2 per year. 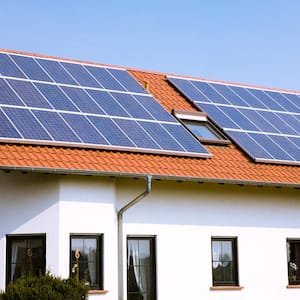 The Homeowner’s Guide to Solar Panels: How They Work, Pros, Cons, and More

Catch some rays with solar panels

How much CO2 does electricity production create? 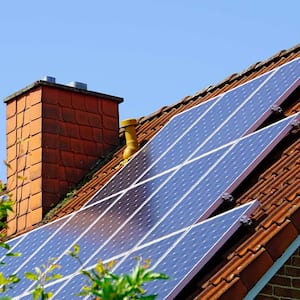 How Much Does It Cost to Install Solar Panels?

How much CO2 does a solar electric system offset?

Today’s average residential solar system is close to 7,500 watts, so my hypothetical system has 24 SunPower 327-watt panels, for a total capacity of 7,848 watts.

Next, I calculated, as a percentage, how close to ideal the home’s roof is for producing solar energy. In New England, a system facing due south with a 37-degree tilt and no shade is 100-percent ideal. From experience, though, a typical New England roof is only 80-percent ideal.

Using the carbon intensity factor of 1.106-pounds CO2 per kWh — the amount of CO2 a power plant would emit to produce the same amount of electricity — we can calculate that this system will offset 9,606 pounds of CO2 emissions each year. 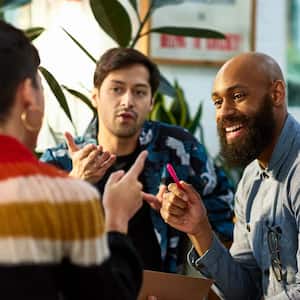 15 Questions You Should Ask a Solar Company Before Hiring

Put the power in your hands by knowing what to ask

What’s the trade-off between trees and solar panels?

The 9,606 pounds of CO2 that the solar energy system offsets every year is equivalent to the carbon absorbing capability of about 50 trees.

From a carbon-offset standpoint, the solar array is a big win. If you are considering cutting down fewer than 50 trees to get the most out of a 7,500-watt or higher solar electric system, don’t feel guilty. On a net environmental basis, you are doing the right thing.

Are you weighing the costs of installing a solar energy system? Share your thoughts in the comments section below!

About this Experts Contributor: Mark Durrenberger, a former nuclear engineer, founded New England Clean Energy in 2006 with the hope of slowing the effects of global climate change. In 2007, Mark was trained by Al Gore to deliver the climate change presentation “An Inconvenient Truth.” Mark has since delivered the presentation some 30 times to more than 1,400 people. He regularly teaches about renewable energy at continuing education programs and community events. Follow this expert on Facebook and Twitter.

As of Nov. 6, 2015, this service provider was highly rated on Angie's List. Ratings are subject to change based on consumer feedback, so check Angie's List for the most up-to-date reviews. The views expressed by this author do not necessarily reflect those of Angie's List.