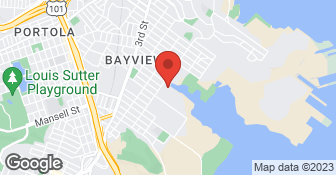 They are excellent, very reliable, honest, and they give very good prices. I would highly recommend them.

Description of Work
They repaired a staircase for us. We have used them for years.

Everything went very smoothly. On time arrival, clean and careful in my home, I'll definitely be working with them again in the future.

Description of Work
I had a light fixture that needed installing in my bedroom, and I also had them replace 4 light switches with dimmable rocker switches.

He had to come out twice to repair the toilet.

Description of Work
He unplugged the toilet.

I need to get another quote because I thought it was a little high but I don't know how much damage was done. I don't live on the property.

Description of Work
He came and gave me a quote for repairing the damage from an overflowing toilet.

Dan returns my calls promptly. He arrives when he says he will. He does great work. He is also a general contractor. He is licensed and bonded as such in San Francisco. I have used him a couple of times and will use him again when the need arises.

I talk with him live on Friday. He set the appointment for monday. I thought Wow how quick. However, when he didn't SHOW or CALL. His promptness is worthless. What a total and profound DISRESPECT of my time !

HORRIBLE. Couldn't even come in time for the meeting for estimates and canceled in the end. Yelled and hung up on me when I called the office to complain, Saying I wasn't friendly and they didn't want to service me anymore. Ugh.. Thank you very much I didn't want to hire you anymore either.

Description of Work
I was first appointment of the day yet they couldn't get here on time for the estimate meeting. They said there were accidents on highway, etc, but the thing is their contractor called me at exactly 10 AM telling me he just left and will be arriving at 10:30 AM then he texted me and canceled meeting cause he got stuck in highway. So much for trying to make it here in time, huh? I took time off from work, I am 2 hours late to my work myself. These people were not apologetic at all. They said they were leaving from Palo Alto. Wow, they leave palo alto at 10 AM for a 10 AM appointment in San Francisco? Well guys my manager called me 3 times asking me to come in ASAP while I was waiting for you. If I wasn't friendly when I called to complain about this botched meeting please understand and apologize properly instead of yelling that I was rude and hung up.

He was great. He was very punctual and professional. He showed up on time and ended up doing some extra work on the side after he gave me an estimate for free. I was very pleased.

Description of Work
He fixed some wood rot in my home

First the bad part: I submitted my work request using the company's web form. When I hadn't heard back from them, I e-mailed. When I hadn't heard back I phoned. Phoning worked very well, I got a call back within a couple of hours, and the owner blamed his computer guy for the other issues. I do know that e-mail now works well since I've used it to communicate with them since, so that part is better. Now the good part: the workman who came out, Angel, was right on time, he took pride in his work, and we had no difficulty discussing what he was doing or why. The downspout issue was a much bigger job than I had anticipated because the whole stack had moved a couple of inches and required more support downstream before it could be pushed back up to the gutter (which, by the way, was 'way up on the side of the building). But he figured it out. Time, and the next rainstorm, will tell. To reattach the light fixture, Angel had to remove two screws that were firmly corroded into the fixture so that he could take it apart. He first tried a lot of WD40 and time, and when this didn't work he drilled them out. He had screws on hand to use as replacements. To reattach the shower bench, he (actually his assistant/trainee) took the bench off and cleaned up the decade's worth of shower ick that had accumulated. Then he replaced the tiny plastic anchors that had originally been used with much heftier ones, and screwed the thing back together. As a bonus, Angel had a trainee along who did several useful things to make the job go better, and for whose work I was charged nothing extra.

Description of Work
1) Reconnected a downspout to the gutter. 2) Reattached an outdoor light that was knocked off the wall 3) Reattached a shower bench that was pulling out of the wall.

Description of Work
TRIED TO GET IN OVER TO GIVE ESTIMATES..DIDNT SHOW FOR ONE APPOINTMENT.VERY POOR RESPONSE TO CALLS

It didn't. Way too expensive given the effort involved

Description of Work
Provided a bid

Dan and his crew were great to work with. They should up on time and did everything perfectly for us and our client was very satisfied with their professionalism. I will definitely contact Dan again the next time we need an assembly of one of our Infrared Sauna kits in his area.

Description of Work
Dan assembled an infrared sauna kit for a client of Rocky Mountain Saunas in San Francisco.

Both guys were exceptionally punctual, clean and helpful. They did everything as asked and with a high degree of professionalism. I'd absolutely use them again (and plan to).

Description of Work
Repaired a broken closet by removing doors, installing drywall and sealant, removing an old carpet and putting a new one down. Also fixed a broken fire-rated garage door by reinstalling it - new weatherstripping, sanding & drilling etc.

Good, solid work at a reasonable price. Able to do a lot of different small and midsize jobs including electrical. We've hired them twice.

Description of Work
Repaired dry rot of beams on our deck and addition. Repainted an area of peeling house paint. Repaired a shower leak and dry wall. Installed an outdoor light fixture and outlet. Helped hang artwork and mirrors.

The work was professional and clean..

Description of Work
He provided some repairs to the front door

The work is going very well. He is extremely professional and great attention detail. He is also very responsive.

Description of Work
He is currently remodeling the bathroom in my home. He has performed wall repair and various other jobs for me.

My husband and I hung a curtain rod in our bedroom with the anchors provided. They weren't holding so we requested that Dan Can come out to fix the problem by putting boards between the studs and then patching the drywall. We had used them in the past through a groupon (although at the time, they were called Handy Dan's) for some minor fixes, and they had completed the work to our satisfaction. They are relatively expensive for handymen, but since they were a service rather than an individual, I thought I could use them and get the work done quickly and efficiently. When they came out to fix the curtain rod, they assured us that their better, heavy duty anchors would hold it in place (rather than placing boards between the studs). They told us that if there was a problem, they would come back to fix it at no charge. About 6 weeks later, the rod started pulling away from the wall on one side, so I called to have them return to fix the problem. I was friendly about it, and mentioned the offer from the original handyman. Their admin argued with me about having someone return to fix the problem, and was generally unpleasant. They ultimately sent a different person out to fix it. We asked them to reinforce both sides, but they only reinforced the side that was coming away from the wall. They also left a huge mess of plaster dust on our carpet after sanding. Sure enough, another 6 or so weeks later, the other side started pulling away from the wall. I called back, left a nice message, and got a return phone call that was friendly this time. I rescheduled, and the handyman assigned to the task called me the morning of the service to confirm. A half hour later, Dan himself called me to say they wouldn't be able to come that day, and that they needed to reschedule for 5 days later at the earliest. We ultimately hired someone else (who did it correctly and informed us that the curtain hardware was oriented wrong -- our fault, but this was never corrected in the visits from Dan Can), which, of course, cost us more money.

Description of Work
Reinforcement of curtain hardware to wall using anchors. Repeat visit to fix original work by putting a board between the two studs (one side only).

CertaPro Painters of San Francisco, CA is pleased to provide the best house painting to your specific neighborhood in and around San Francisco. Please call us today at 415-661-8400 for a FREE ESTIMATE!  …

How is Dan Can Handyman Services overall rated?

Dan Can Handyman Services is currently rated 4.6 overall out of 5.

What days are Dan Can Handyman Services open?

Dan Can Handyman Services is open:

What payment options does Dan Can Handyman Services provide

No, Dan Can Handyman Services does not offer eco-friendly accreditations.

Does Dan Can Handyman Services offer a senior discount?

No, Dan Can Handyman Services does not offer a senior discount.

Are warranties offered by Dan Can Handyman Services?

What services does Dan Can Handyman Services offer?