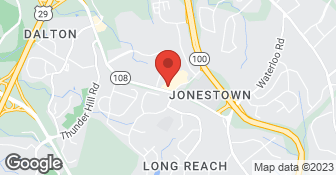 Fantastic job. Excellent price, below other proposals. Previously I had overflowing and leaking gutters creating water damage on wood external molding. B Marshall arrived and in most professional manner fixed EVERYTHING. Since then we have had massive rain and all is secure. This was high quality work, done efficiently and with helpful explanations and advice and always polite manner. I will use again. Highly recommend.

Description of Work
Siding on a building needed repair

High quality work and excellent customer service from a local, family-owned business. I would HIGHLY recommend this company. We had them replace our gutters a year ago. They provided good advice on which gutters to use and did an excellent job. We recently hired them to paint our aluminum siding. Again they did an excellent job and gave great customer service. When we couldn’t find the right size shutters at Lowe’s/Home Depot, he knew exactly where to get them and only charged us for the cost of the shutters, not for his time to pick them up himself. We definitely had two great experiences working with Ben.

Called them out for estimate. Their price estimate is ridiculously high. The job I asked them about should not cost me more than $400, they quoted me around $3500.

We are a fence and deck builder that makes the process easy on you. Through our concentrated specialization on fencing and decking, we are able to offer you exemplary services in both categories. As a result, the majority of our customers come through referrals. Call or click to schedule an estimate today!  …

Abbey Fence & Deck Co., Inc., boasting one of the area’s largest and most versatile facilities, has been serving metropolitan Baltimore with pride for over 50 years. Family owned and operated, our guaranteed workmanship has added distinction – privacy – and security to thousands of homes, businesses, government and industrial sites. Prior to 1985, Abbey Fence Co., Inc. concentrated predominately on residential fencing. In October 1985, Fritz Fence, a well known and respected company in the commercial and industrial market, was acquired. It was a perfect fit and today, Abbey-Fritz Fence remains dedicated to providing quality materials, labor and professional service at competitive prices. Abbey-Fritz Fence is a member in good standing of the American Fence Association and the Associated Builders and Contractors Inc. We are extremely proud of our charitable endeavors as well. Materials have been donated to Grant-A-Wish Foundation at Johns Hopkins, the Ronald McDonald House and the Compassion Center in College Park, MD.  …

How is B. Marshall Home Improvements overall rated?

B. Marshall Home Improvements is currently rated 3.4 overall out of 5.

What days are B. Marshall Home Improvements open?

B. Marshall Home Improvements is open:

What payment options does B. Marshall Home Improvements provide

Does B. Marshall Home Improvements offer a senior discount?

No, B. Marshall Home Improvements does not offer a senior discount.

Are warranties offered by B. Marshall Home Improvements?

What services does B. Marshall Home Improvements offer?

Are there any services B. Marshall Home Improvements does not offer?