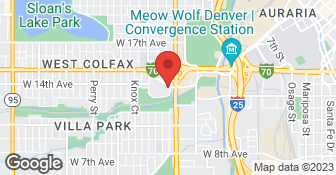 Blue Lotus Outdoors is a full service landscape company serving the Denver Metro area since 1999 and is one of the most respected landscape companies in Colorado. We are a company that specializes in residential design, build, maintenance and furnishing to the home owner, builder or developer. We truly provide “Everything under the Sun”

After a year we noticed the drainage issues weren't corrected as initially planned with the design. Trees died due to much watering and flooding. Ground lighting kept blowing out and the mulch kept flooding away. I was charged for all corrected issues. They wanted to charge us for all they did that wasn't designed correctly. We used them due their supposed expertise. There was never any good faith on trying to make things right! On the second year, we fired them! Still the trees continued to die and the drainage issue pursued. The ground lighting became an issue because the wiring kept shorting out. It became to unsafe and we had to disconnect it, in fear it would electrocute someone or the pets. Recently we were having issues with the sprinklers. Once we investigated the issue, the wires were spliced together, not marked, or capped safely. Since then we had several Landscapers to consult on how to correct the matter. Bottom line, we would have to rip up the whole back yard and start over because Blue Lotus NEVER corrected the drainage issue! Pergola started to rot due the flooding too and we were advised to remove the ground lighting. There service was a waste of money. DO NOT USE THEM!!! We are still finding out things they did wrong.GET A CONTRACT WITH THESE FOLKS! HOLD THEM ACCOUNTABE!!

Tree Guyz and a Gal

Greetings and salutations welcome to "Tree Guyz and a Gal" tree removal company. We are a forward thinking and innovative company that dose nothing but tree and bush work. Our clients and their trees needs are the most important thing to us. We offer a full range of service of tree and bush service such as full removals, trimmings, stump grinding, emergency limb elimination and so much more. We pride our selves on coming from a "pow-line vegetation management" company aka we use to maintain and keep vegetation a certain distance from the power lines in the mountains and in town. We are duel female and male owner-operated and a locally owned small business & we pride our selves on not having all the huge and oversized equipment that some offer. Just us, our ropes and chainsaw in your trees and bushes. So give us a chance and we'll come running with a pep in our step and need to complete the job excellently!  …

Masterful Masonry has the experience your project requires. We are committed to providing quality workmanship and superior customer service on all of our applications. At Masterful Masonry, we strive to maintain our reputation as a high quality, very service oriented company. Call us today!  …

Design Exteriors specializes in large-scale Design and Build projects. Want your backyard to be the envy of the cul-de-sac when you host that Broncos party? Let us "trick" it out with a completely customized pergola, fire pit, water feature, privacy screening & specialty patios to set it all on. Want your home to be the loveliest on the lane? Let us design and install a gorgeous curb appeal revision for you. When you're ready to totally revamp your outdoor space and bring in the experts, we're the ones that you will love working with! We partner with homeowners to help them conceptualize what they want and/or need from their exterior home spaces and then we bring in our expert artisan crews to make that vision a reality. Our designs are characterized by elegant curves and sophisticated arcs we affectionately refer to as "Shoebridge Circles" after the lead designer (and owner of our firm) Cedric Shoebridge. Bricks, stone, and pavers have to be custom-cut to fit into these curves, but we know they're worth it because as we like to joke around the office, you never hear a grandma yell to the grandkids to "Gather Square!" We say, "Gather around," because it's circles that bring families together. We are proud to have an A+ rating with the BBB and have been a multiple Award Winner with Angie's List and Home Advisor. #GoBroncos  …

Blue Lotus Outdoors is currently rated 1 overall out of 5.

No, Blue Lotus Outdoors does not offer free project estimates.

No, Blue Lotus Outdoors does not offer eco-friendly accreditations.

No, Blue Lotus Outdoors does not offer a senior discount.