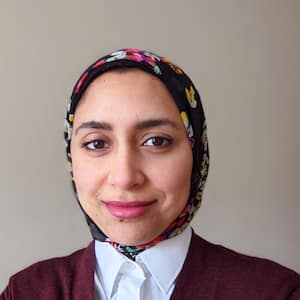 Evacuate! It can take as few as five minutes for flames to take the whole house

As scary as it can be, an average of 350,000 home structure fires occur each year in the United States. According to the Red Cross, fires kill more Americans each year than all natural disasters in the United States combined. Even when people survive fires, it can cost hundreds of thousands of dollars in property damage.

And while some houses can take as few as five minutes to become completely engulfed in flames, it’s important to understand the behavior of fire to take the needed precautions, keep your family safe, and minimize the damage.

What Causes a Fire?

Hundreds of things can start a fire, but some of the most common causes are cooking, laptop batteries overheating, lint buildup in the dryer vent, and candles on shelves.

How a House Fire Spreads

A fire can go from a little spark to a blaze in a matter of minutes.

Here is a breakdown of the sequence of events in a typical fire, highlighting how quickly it can spread. Follow along to learn how you can protect your family, your life, and your home.

A pot is boiling, spilling grease directly onto the cooking flame or hot electric burner. The grease ignites into flames, creating a flash. In 30 seconds, a small flame turns into a full-blown fire.

Within seconds of a flame, the fire starts to spread. Grease residue on a dirty stovetop will burn, causing flames to travel across the stove range. Fire will catch cooking utensils with oil residue or dry dish towels nearby. Fire starts generating smoke that includes toxic gases such as carbon dioxide, carbon monoxide, and hydrogen sulfide.

If you catch fire at this point, don't attempt to move the pot or pan or throw water on a cooking fire—this will only spread the greasy flames. Instead, cover the pan with a lid to block the oxygen and put out the fire.

As the fire grows hotter, more flammable objects will help grow the fire, such as wooden cabinets, countertops, and curtains. The fire starts moving beyond the stovetop to other areas burning and shooting hot poisonous smoke across the ceiling within the first minute.

Breathing this smoke can hurt; two breaths can make you pass out.

The smoky layer creeps to the top doorway or window and quickly shoots out of the room. The air travels through hallways and up to the next floor carrying hot air and deadly gases.

If someone is there, they could get carbon monoxide poisoning and die.

During the third minute, the hot gas temperature rises to 400 degrees F, which is hot enough to kill people.

A dense smoke cloud fills the room as the fire spreads by flames touching the next item to burn or autoignition where the entire home content spontaneously bursts into flames, from furniture to floor to ceiling.

Now the glass windows shatter as flames shoot out windows and doorways. The upstairs fills with thick hot smoke.

During flashover, temperatures can reach up to 1,400 degrees F. Now, all of the other rooms in the house are severely at risk, as flames travel quickly both vertically and horizontally through rooms.

The house is now in the decay stage, which is the longest stage, usually when the available oxygen and combustible materials decrease.

Every fire is different; the rate at which a fire spreads and the severity will vary. But generally, a house can become fully engulfed in flames in as few as five minutes but will usually take at least an hour or more to burn down completely. 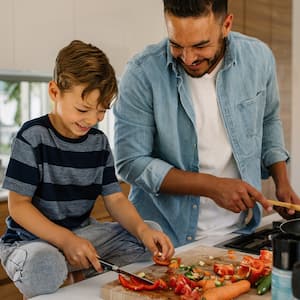 Your cooking skills should be smokin’, not your kitchen

While there are fewer fire incidences compared to 10 years ago, newer homes burn faster and become more dangerous when they catch fire. A few decades ago, you had on average of about 14 to 17 minutes to escape a house fire. Now, you only have three to four minutes to get out of a burning home.

There are a few reasons why newer homes are burning faster:

Homeowners should keep these points in mind to remain prepared in case of fires. It’s about getting out safely, quickly, and recovering with minimum damage. 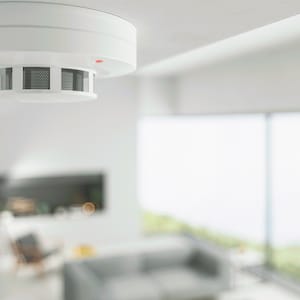 How Long Do Smoke Detectors Last?

You should replace your smoke detectors at least every 10 years