Knowing a bit about your home's architectural style can come in handy in several situations. Perhaps you're about to put it on the market and need to know all the terminology about Tudors, Victorians, and craftsman-style homes. Or maybe, you're just wondering, "what type of home do I have?" so you can quiz your friends at dinner parties. Learn 11 types of homes and how you can tell which one yours is.

The Four Main Categories of Homes

To get started, understanding which category your home falls into can also assist a bank to determine your mortgage rate.

No matter your home's style, you likely own a:

Each category ranges in its level of ownership. Either you own the entire property—such as in a single-family or manufactured home—or you share ownership with a board, such as with a condo, co-op, or townhouse.

The 11 Most Common Home Styles in the U.S

From early British settlers to Frank Lloyd Wright, you'll find countless architectural influences all around the country. Each style has a strong say in a home's value, insurance rate, and curb appeal. It can also advise you on when and when not to make renovations.

Too many modern upgrades to traditional styles can inadvertently devalue your home—yet another reason to understand the historical background of your house.

Without further ado, the most popular types of homes include:

Let's move through the centuries, from the Mayflower to modern day, and take a look at all the things that make these types of homes catch your eye walking down the block.

By far the most common home type of architecture style in the U.S., colonial homes cover the designs brought over by early waves of settlers. You'll find colonials from the British, Spanish, French, and Dutch from shore to shore.

These types of homes will often include the following characteristics:

Colonial revivals brought this design back in the late 19th century. Most of the colonial homes you find today outside of the northeast popped up during this time.

While technically a member of the colonial family, Cape Cods have their own signature look that sets them apart. Settlers built these homes originally for their sturdiness and ability to hold in heat long before the convenience of central HVAC systems.

You'll know a Cape Cod by its:

Most of these cuties are found in the northeast, but they made a comeback in the mid-20th century with a bit more natural light.

There's no lack of drama in a Greek Revival home. The style emerged between the late-18th and early-19th centuries and influenced what we know as the federal home style.

You’ll know you have a Greek revival home by its...

While eye-catching, the style is simple compared to others and often symmetrical. This symmetry easily translated to the neoclassical federal style seen in the White House.

There's nothing quite as romantic as a Victorian home, and you're unlikely to find one exactly the same as the next.

Popular in the 1830s and into the later 19th century, the houses are known for having:

Queen Anne homes also fall into this category and include the most ruffles and frills, often with multiple dormers, dramatic eaves, and asymmetrical floor plans.

Moving into the mid to late 19th centuries, Italy's architecture styles started to make a splash in the U.S.. While you'll spot elements of Victorian homes, the structure is much more symmetrical.

Fun fact: Many of today's traditional brownstone townhouses in the northeast include Italianate architecture as well.

These sturdy yet uniquely designed home types are often the envy of the home market. Their symmetry makes them aesthetically pleasing but they have enough unique accents to set themselves apart from the rest of the homes on the block.

Some homeowners encounter structural issues with craftsman homes built from 1900 to 1930. Poorly poured basements or slab foundations can lead to extra upkeep down the line.

Tudor homes may look like something out of the 16th century, but they appeared in America in the early-20th to pay homage to the English style. The color of Tudor homes makes them stand out, with white or cream exterior walls lined with dark brown or black trim.

Moving in the mod period of architecture, you'll encounter homes built between the 1940 and 1970s. Like contemporary homes, you'll find a massive range of unique takes on style in this category, making every home slightly different than the next.

While these homes gained popularity on the west coast, the style influenced many new suburban developments across the country during this time of growth. 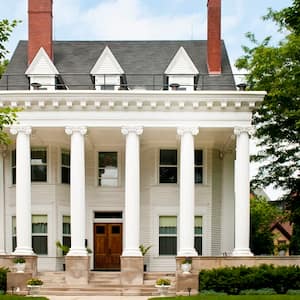 Everything You Need to Know About Colonial-Style Homes

From its symmetrical exterior to a traditional floor plan, colonial architecture is one of the most popular options for classic homes in the U.S.

The other style to launch in the mid-20th century was the ranch home. These are the iconic suburban home types you imagine from most images of the 1950s, but many are still popular today.

Split-level homes are a bit like grown-up ranches. They appeared in the 1960s and followed a lot of the same principles. The major difference is that split levels do have a second floor, but there is a small flight of steps to get there.

Much like mid-century, the contemporary style is always changing based on the fresh ideas of today's top architects. These are the eye-catching homes on the block that challenge—or creatively combine—the traditions on this list.

Selling these unique homes can be a bit tricky due to their signature looks, so make sure you have the right type of real estate agent that understands the challenge.

There are plenty of home styles that didn't quite make the list—like art deco, farmhouses, and Mediterraneans. American home architecture varies from town to town and state to state, mapping out the region's history and the long list of home builders that left their mark there.

Once you know the type of home you have, you can gain a better understanding of its history and your architectural style.