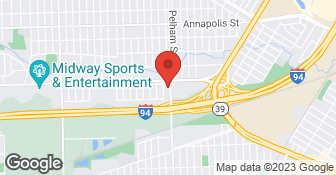 They are genius in working with different kinds of lock. The price was reasonable and he did a fantastic job.

Description of Work
They fix the locks on our car.

Jim was punctual, polite and very knowledgeable. He willingly returned four times to make minor adjustments with no additional charge. Ours is a church with an elderly congregation, some of whom had trouble operating the new commercial locks. Jim stuck with us until everyone was satisfied.

Description of Work
Add panic bar and re-key all locks

The locksmith was supposed to be here at 3:30 he called and said that he was running late and he would be here around 4: 00! When he did not show up by 4:45 I called and canceled, he showed up10 minutes later. I told him that I canceled the service because I had things to do, he said that he could get the job done in 20 minutes, I told him that since he was here and could get it done in 20 minutes, go ahead and get it done! He was working on the front door when he ask if I had problems with the lock sticking, I told him that the locks all work fine and I just wanted them re-keyed because the locks were on the house when I bought it and there was nothing wrong with them. He said that he would have to rebuild the lock, I said whatever it takes to make it work like it did. He ask me how many key's did I want, I said that I wanted 2 extra key's per lock, I told him that I was quoted $45.00 for the service call and $10.00 per lock, he said that was right and the key's would be $4.00 more. When he finished he handed me2 key's for the front door and 2 for the back door, I asked where the extra key's were, he said that was it! I told him that was not right, I told him that $10.00 a door is supposed to include a set of keys, he said that I had a set per door, I tried to tell him that a set means 2 and I paid for 2 extra key's he said that he was not going to argue with me about it and if I had a problem to call the office tomorrow, I told him that I would, since he didn't understand what a set of keys means, I told him that I would also leave a negative feedback on Angies list and he said that was ok because the company has been in business for 40 years and they have plenty of positive reviews. I don't know if he was having a bad day, but when he showed up he seemed to have an attitude and that did not change, he was not friendly at all. I wish now that I would have stayed with the cancellation & called someone else! People should not have to pay to be aggravated in their own homes! Their prices seem to be on the high side, they don't need to nickel and dime people on the key's & who knows what else!

Description of Work
Re-keyed the locks on 2 doors

Called when he was on the way, very professional and got right to work. He even helped me hang a garage door keypad and program it.

Description of Work
Changed locks for home I'd just purchased.

Was running a few minutes late, but called to let me know before the appointment time. Efficient with his time and materials. Would recommend this company.

Description of Work
Friendly and professional. He did NOT try to sell me things that I didn't need.

They were prompt and did a good job changing the locks. I think I've used them twice.

Description of Work
A&B Locksmith was recommended by AAA . They replaced a lost set of car keys and two key fob's for my Mercury Mariner. The dealership wanted $300. They did it quickly while I waited. AAA roadside assistance reimbursed me for the replacement key so my total out of pocket expense was $50. I have used these guys since I moved back to Dearborn 17 years ago. They are trustworthy, reliable, and reasonable.

A and amp; D Locksmith were very professional. They were on time and did a good job. Their prices were reasonable. I will use them again if needed.

Description of Work
I had them change out the locks on our house doors.

They said that it was "Too bad" and would not do anything.

Description of Work
I took a broken key that they had made 8 months before.

It went very well. He came over to see what the problem was first, then went back to his shop and returned with a new handle and the other pieces needed. He replaced everything but the cylinder, that was still good and we were still able to use our original keys. He was very thorough and even lubricated our squeaky hinge on the door. I am very pleased with his work and the new handle and lock are wonderful.

Description of Work
The lock on our kitchen door leading to the garage broke when I came home yesterday, and my key was stuck in the lock. After finally removing the key, I tried lubricating the lock with WD-40 but it was still messed up and would not lock or unlock properly. We have used this company before and liked them, so they were who I called today almost noon. By 3:45 pm, the entire door handle and lock mechanism except the cylinder was replaced.

I am extremely pleased...thank you!

Description of Work
I was locked out because the door knob was faulty. It was extremely cold outside, we were trying to open the door for about one hour, it was about 9 pm, went back to our house (we are house sitting and dog sitting) my parents home. Needless to say, the doggies were upset, I was upset that I could not get into the house. I called A&B Locksmith around 11:00 pm on a Saturday night, they promised to be there within the hour and sure enough about 40 minutes later they were there. I explained the situation and they said if I had the key to the deadlock they could help us, otherwise they would need to call the police to oversee the work. I thought that was thorough and appreciated it. Otherwise, can you imagine? Anybody can get into each others' home. I would definitely hire them again. Thanks Angie's List, you saved the day!

Turbo Key locksmith is a locksmith company that offers locksmith services in the southeast part of Michigan(Southfield, Ann Arbor). We offer the best service with skilled technicians who can help you resolve any lock or key issue promptly with the most modern equipment and skills. Our locksmith services include: boats key replacement and Mercedes-Benz lockout. Call us today for a free quote !  …

Frequently Asked Questions & Answers about A & B Locksmith

How is A & B Locksmith overall rated?

What days are A & B Locksmith open?

A & B Locksmith is open:

What payment options does A & B Locksmith provide

Does A & B Locksmith offer free estimates?

Does A & B Locksmith offer eco-friendly accreditations?

No, A & B Locksmith does not offer eco-friendly accreditations.

Does A & B Locksmith offer a senior discount?

No, A & B Locksmith does not offer a senior discount.

Does A & B Locksmith offer emergency services?

Are warranties offered by A & B Locksmith?

No, A & B Locksmith does not offer warranties.

What services does A & B Locksmith offer?