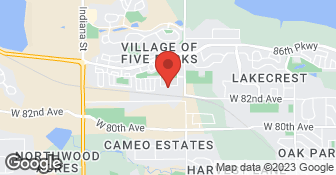 Flatirons Plumbing is a family owned and operated plumbing and 24 hour emergency drainage company serving the Denver Metro Area. Call us at (720) 630-1784 for help with your residential plumbing and water heater needs today! Flatirons has earned a reputation for being a reliable professional plumbing service featuring highly-skilled technicians....

Buyer beware!!! This company is not trustworthy. They cannot and will not provide you with an itemized invoice explaining the cost of their work, they simply just give you flat fee with no detail. When i spoke with the owner paul he continually avoided my requests for a detailed and itemized invoice of the work performed at my house and he flat out refused to give me an invoice explaining the charges. This all started because i was charged 2300$ to replace a water heater, i looked up the model they sold me its cost about 750 and change, the "master plumber" was here for no more than 3 hours ( part of which was spent looking at a running toilet that he was not asked to look at). Now im no math wiz but assuming the old water heater cost 100$ to dispose of were at 850, plus various fittings, maybe 50$ at most, were at 900, so 1400$ for 3 hours of work breaks down to 467$ per hour..... that pretty much should speak for its self. However when i spoke with paul he kept trying to explain to me his business model, and that my bill somehow covers health insurance and retirement and taxes and fees blah blah blah, all things that are not my responsibility. I spoke with a another plumber who said the same job with the same water heater could have been done for less than 1100$. So if you want to pay double what you should, call these guys. Side note: that running toilet, Jim the "master plumber" told me it would cost 1200 $ to replace the entire toilet to stop it from running. I went to home depot, spend 16 $ on a new fill valve, the last one was installed incorrectly, something the master plumber failed to identify, and fixed the problem myself. Bottom line, this company seeks to overcharge you every where possible and their work is not equal the 2 times the standard price for such a job. Dont waste your time or money on these so called "professionals" who cannot even be troubled to provide you with a itemized invoice.

The work was done perfectly, the charges were excessive. I made a complaint, the owner called me and offered to refund me a portion of the charges, so in the end the price was reasonable. The owner was extremely responsive and gracious. Not sure why we were charged so much to begin with though.

I've hired them twice and would go to great lengths to make sure I can hire them again with any future problems. They're very professional and fair with their pricing. Couldn't recommend higher.

Tech was professional, prompt and explained everything. He did a great job!

He had to redo the pipes under our sink. Took the time to show us the problem and discuss solutions. Took 4 hours to make the fix. Great experience.

Description of Work
Leak under the kitchen sink

Super happy with the services performed and the professionalism of the plumber who came out! Plumbers are always expensive, but this was the first plumber that I felt was worth the money.

Very professionally done, and reasonably priced. I would use them again.

He fixed the leak and fixed SN issue with our dishwasher. He was great!

Description of Work
Plumbing under our sink was leaking

They were good. The quality of service was good. The price seemed a little high, but I haven't done very much plumbing. So I don't know how to kind of reconcile. I don't know if their price was reasonable and I just didn't have anybody else. I literally had leaks and had to have them fixed. It was just they came out and were available. In the end what matters is it was fixed. That was the only thing that perturbed me, is I thought the prices were a little steep. Everything about their service was excellent, the price was just a little high.

Description of Work
They fixed leaks.

Contact Euro Plumbing for your water heater, garbage disposal, faucet, sinks installations. We have the best price in town, licensed, insured, background checked and all work is done professional! As a full service Master Plumber, Dimitar Kostarev is a true professional with more than 10 years experience in the plumbing business. We react when you need us, get your request right and get it DONE right!!! Our goal is to provide personalized service to every house we walk in!  …

HVAC, general repairs, maintenance, in business since 1982. Family owned and operated. Some other stuff about things a few other things.  …

We are a Drain Cleaning , Sewer Repair Company . We service Denver Metro area .  …

How is Flatirons Plumbing overall rated?

Flatirons Plumbing is currently rated 4.6 overall out of 5.

What days are Flatirons Plumbing open?

No, Flatirons Plumbing does not offer free project estimates.

Are warranties offered by Flatirons Plumbing?

What services does Flatirons Plumbing offer?

Are there any services Flatirons Plumbing does not offer?