How Much Money Should I Pay a Contractor Upfront?

It’s common for contractors to require a portion of their quoted price as soon as you sign a contract and before they start the job. This fee is typically called a deposit, and some contractors use this money to order supplies upfront while others use it to reserve a place for your project in their calendar.

Upfront deposits are generally non-refundable, which is why you should always read the fine print on your contract before signing. For larger projects, that upfront deposit can be quite a chunk of change.

How Much Is Your Deposit?

When a contractors gives you a quote for your project, they will usually break the cost into sections according to when payments are due, known as a payment schedule. For example, if a contractor gives you a quote for installing a new bathroom—on which you can expect to spend a minimum of $5,000—it’s not unusual for them to request a portion of that $5,000 upfront, with additional amounts due at the mid-way point and as the final payment. For a $5,000 project, it wouldn’t be uncommon for a bathroom remodeling contractor to ask for $500 or 10% of the project’s total cost. 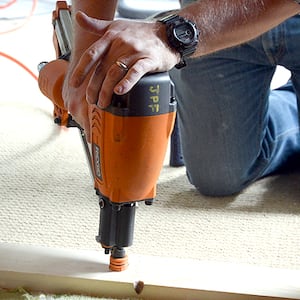 What Are Local Laws?

Some states have strict requirements about how much a contractor can ask for upfront. In California, contractors can only ask for $1,000 or 10% of the project’s total estimated cost. You should check the law in your state to see what your contractor is allowed to ask from homeowners. If a contractor asks for more than the legally-permitted amount in your area, you may want to reevaluate hiring them to complete your project.

Look at Your Payment Schedule

Your payment schedule determines the amounts and they’re due dates. You’ll notice that the upfront fee (normally written as a deposit) will be due before your project’s start date However, you should also check if there are any additional costs or fees due before work begins. Anything paid before the job begins would be considered part of that upfront payment—an amount you’d likely be unable to recover if something were to go awry with your project.

Your Deposit May Vary

Most contractors will require a portion of their payment upfront for the reasons we’ve already discussed, but some things will impact how much of a deposit you owe. Your contractor may offer discounts if you pay all costs up front or if you guarantee to pay in cash. If you have concerns about how much they’re asking for before they start, talk to them. Often, contractors will negotiate things like pay schedule and the amount due upfront, which is why it doesn’t hurt to try and negotiate with your contractor.

Never Pay More Than Half

A good rule of thumb is to avoid paying more than 50% of the estimated cost of the project upfront. If something happens, you could be out more than half of the amount of money you budgeted. This means it could be hard for you to have another professional complete your project if this pro falls through.

Obviously, if you’re hiring someone to add a bathroom it’s going to be a little less expensive than hiring a general contractor to build a new home. Larger projects will understandably require more tools, more laborers, and larger deposits. If you’re worried about the amount of money your contractor is asking for up front, reach out to other general contractors in your area and find out what they ask for as an initial deposit.