With Angi since February 2017 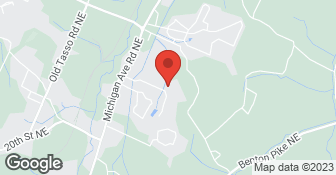 The initial meeting and agreement on what needed to be done was great, that is why we hired him. The project took a while due to no shows, being late, and having to come back a few times for not having enough material on hand. When the rock was delivered it was late in the day and we were told it was a fresh load and there was still dirt in it. We said that was fine since we were also told the dirt would wash away from the rock after rain. Everything was installed as agreed upon, we had a few call backs but other than that were happy with the end result. However, after a summer of rain the dirt did not wash away but instead built a layer of dried mud that is about 1" thick. I am now having to dig it up, sift all the excess mud and dirt from the rocks and rinse the rocks so we won't continue to have this problem. During the install I had also asked him to lay some pavers we had on hand nicely so we had a little walkway in the flowerbed. He did do this, however, when I started to clean up the stone I found a paver completely buried under all the rock and dirt. It is very frustrating now to see all this as I feel he didn't care and just wanted to rush and get the job done. This is our own fault for not catching it earlier and just sick at all the money we wasted on rock.

The company initially came out in late April and left the invasive shrubs and random seedlings over the yard. They worked on the yard for about 3 hours, but it seemed mostly mowed. Once we were able to look at the yard we complained, and the owner assured us someone would be out to fix the yard asap. It took a few weeks due to rain, but they did return. They did a very good job on the yard at this point, and we were happy they still followed up with us even after a few weeks.

Description of Work
The landscaping company was hired to clean up our yard, so it could be put on the market. They were to cut back trees and rid the yard of invasive shrubs. The owner estimated it would take approximately 6 hours of work and charged $570.

Went great and was done pretty fast loved it would recommend to family and friends!!!

Very well, great prices and great work, will continue to use Berywood Landscaping

Owned and operated by a long time Chattanooga Area Resident and former Olan Mills,Inc. Executive, Fred Friday. Serving Chattanooga, Cleveland, & North Georgia with the Fastest and GREENEST Junk Removal. Free Estimates. And Often Same day service. We Recycle up to 60% of what we remove. Through local charities and conventional recycling channels. We'll beat any written estimate on any job.  …

How is Berywood Landscaping overall rated?

Berywood Landscaping is currently rated 4.3 overall out of 5.

What days are Berywood Landscaping open?

Are warranties offered by Berywood Landscaping?

What services does Berywood Landscaping offer?