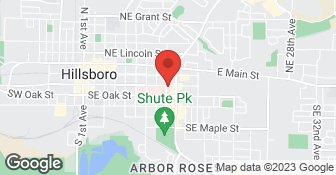 4 EMPLOYEES. NO SUBS. COST IS DETERMINED BY THE JOB. NO TRAVEL CHARGES. ASK ABOUT ANGIE'S LIST DISCOUNT.  …

Renewal by Andersen offers a start-to-finish window and patio door replacement process, where you'll get custom-crafted, energy-efficient replacement windows and doors professionally installed for you. Simply request a free in-home window consultation and you’ll be on your way to enjoying your beautiful new windows and patio doors for years to come.  …

Window World of Portland is locally owned and operated by owners John Rouse and Bill Mallory. Always committed to bringing the finest exterior solutions to our customers, we have been providing our signature vinyl windows, siding, entry doors, patio doors, storm doors, garage doors, and more to the Portland community since our start in 2007. With a combined 47 years of construction expertise, John and Bill lead our team of estimators, installers, and office staff in our mission to offer remarkable service from the start to finish of every job. Having served over 3,000 homeowners in the region, our business philosophy is based largely on building relationships with customers. We take pride in the value we provide through our service, high-quality products, and years of construction experience.  …

Technician had problems installing the new balances so they did not whine when closing. He explained there is only 1 manufacturer for the balances and the quality isn't as good. He used a lot of spray lubricant to get them to work smoothly.

Description of Work
Replaced 2 balances in 2 windows and rescreened one window.

Outstanding work, would recommend the company to any home owner.

We didn't get off on the right foot, in that my insurance company connected me to Sierra Glass with a three way call, and I was sitting in my car in a parking lot, with no way to take notes. So I asked if they could remind me of this visit being set three weeks in the future. Day came and went, and I missed it because I spaced it and didn't have a reminder call. Two more weeks passed and a new appointment was made (and we received a reminder call the day before). Office staff was courteous, professional and ready for me when I arrived. Warned me the car would have to sit a few hours afterwards, and not be washed, etc. No problem. I did rate them slightly lower on Overall and Quality because of three peripheral items: A) When I picked up my car, it was sitting in the lot unlocked, which I didn't like. B) they put some shiny oily stuff on my dashboard which literally glares in the windshield in the sun, making things less visible. I don't mind the "clean" concept, but why shiny/oily rather than matte, dark on a black dash? Add to that, the fact whoever cleaned the dash also left a giant trail of dusty debris on the dash, up against the edge of the window, very visible to driver and passenger reflected in the windshield. So I "baby wiped" it as best I could to clean up along the edge, and thought it would have been a lot easier for them to vacuum or wipe this out while they had the window out.... wondered why they left it? C) And one third ironic item: Why would they leave an annoying 1/2" x 1" oily smudge smack dab in the middle of driver view, again, highly reflective in the sun as I drove home!!? Just an odd and "missed quality control opportunity" thing to leave there. One last note: Sierra Glass office was professional and tidy. But shop itself was disorderly, cluttered, messy... completely diametrically opposed to what I had been accustomed to, dealing with for instance Premier Auto Glass, down in Eugene. Had they been closer, I would have given them the business.

From the moment I called to get an estimate, Vince and the guys at Sierra Glass were super professional. Vince was able to come out the very next day, and got me a very reasonable estimate for the day after that. Scheduling was as easy as a rainy Portland in February can be, and the guys arrived right on time. They were super friendly and personable, but it didn't take them any time to realize that my window wasn't the problem ... unfortunately a cascade of water is coming down from behind the siding and now I have to find a siding repair company (ugh!) but the guys were very knowledgeable and friendly and made a bad situation as humorous as it could be. What's more, they didn't charge me for the time they spent. If I get the siding fixed and need to replace windows as part of the deal, I'm totally going to bring these folks back to do the job. Thank you for your courtesy and professionalism, it's greatly appreciated.

Vince came out prior to installing new shower and gave me an estimate for custom shower door that turned out to be what the exact price was in the end. He came back and took final measurement after tile was installed and measurements only took ten minutes from start to finish. Within a week the shower door was in and Vince called to set up appointment for installation. On day of install we were going out of town, so the crew called to see if they could come earlier in the day, which was perfect for us. Installers were very respectful and professional. The shower door turned out great and was the same price as the estimate. I have already referred two neighbors to Sierra glass.

Sierra Glass came and measured my windows before giving me an estimate that was very reasonable. I had them replace the windows. The repairman was very professional, very courteous, and the end result is terrific.

Description of Work
I had four windows that had broken seals.

We ordered a glass tabletop for them. We gave them a template that we had made out of paperbags. I took it to their shop, was given an estimate of cost and time involved. The cost was accurate as well as the time frame for completion. It fits perfectly. I am very happy with the result. Very friendly people.

Description of Work
Ordered a glass tabletop for you dmall dining table.

No fuss, no mess, did what they claim they would do, cleaned up afterwards.

Sierra Glass is an outstanding company to do business with. I have done business with them on numerous occassions including work on my vehicles, my home and for many of my customers. They have always done amazing work and really know how to treat their customers. I feel confident recommending them to anybody I know and anyone on Angieslist that would need glass work done. They will not disappoint you!

Description of Work
Sierra Glass replaced the windshield in one of our work vehicles and also replaced our sliding glass door at my residence.

Sometime ago I stumbled against the hutch in my dining room breaking the glass behind a copper lattice screen. The broken glass was wedged behind the framing and screen and we could not figure out how to remove the glass and front decorative molding to trace a template for replacement glass. Then how to get it back together? I called a glass company from Forest Grove who grudgingly took a look and declared the task impossible. We called Sierra Glass who came out promptly, removed the decorative molding, screen and broken glass. A few days later he returned with the glass cut to fit, 12 3/8" by 41 1/8", and put everything back together.

Description of Work
Removed broken glass panel wedged behind molding and screening in my dining room hutch. Replaced the glass and reassembled everything.