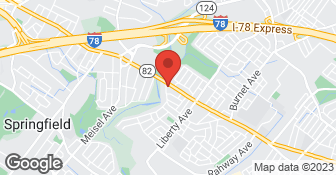 All County is a family owned and operated company. All county does not sub-contract their work - in fact most of New Jersey's builders look to All County for their waterproofing and foundation needs. All County is New Jersey's #1 waterproofing, mold, and structural repair specialist. We offer special discounts for senior citizens, the men and women of our armed forces, as well as policemen, firemen, and teachers....

The service was excellent, everything was of high ratings.

Description of Work
They put in new french drains

We called All County and they came out right away to remediate an issue. Their communication was excellent! They got the job done on time and they were priced more than fair. Super professional and clean job, would HIGHLY recommend them!

Summary: All County Waterproofing recommended and installed a $3200 waterproofing system that I did not need. The problem was made worse by their solution, and all I needed was a $600 Roto Rooter snaking of my house drainage line (for tree roots). All County Waterproofing never investigated or suggested other solutions or reasons for the water problem we had – they went straight to the $3200 system. The owner even told me over the phone later that they’re not in the business of providing solutions where they don’t sell a product, as they can’t make money that way. They are either incompetent or unethical in business practices, and either way, that’s not good for the customer. The details: In October 2018 I called All County Waterproofing to find a solution for water seeping through one section of my basement wall, near the sump pump, and through the window well. Area manager Michael Grollimund told me that the parging (plaster covering the brick) was old and the cinderblocks were hollow, allowing water to flow from outside into the basement. He said once water finds a way into your house, it will continue on that route. He said our current French drain was not equipped to accept water coming from the outside top ground layer, only underground water, and he recommended a new drainage system along the front wall, with holes drilled into the brick at the floor level, so it would drain directly into the new piping, and be carried to the new sump pump. They would also install waffle board at the base, so any future leakage would be directed into the drain. At no time did Michael Grollimund inspect the area outside the house, or suggest any other reason for the leakage. The work was performed on November 2, 2018. During the next rain (that week) water continued to come through the wall and window well. I contacted Mike to find out if this was normal. His response was to send his foreman, who tacked up waffleboard going up the wall. It seemed to be a bandage, not a solution, and was unsightly. On November 15, New Jersey had a huge snowstorm, and water pooled outside the affected basement wall. The sump pump ran every 20 seconds for several days, and I started hearing water purging noises from the side of the house as well. Water was being forced out of the house drainage pipe, spilling over to the flooded area, with every pump. It was cycling through the sump pump and drainage system. I was worried the sump pump was going to burn out. I texted Mike about this with photos on November 17. On November 24, we had another heavy rain, flooding the area outside the affected basement wall. Now water was pouring over the basement walls (not just through the parging). I have video which shows this. The sump pump was running continually, pumping water every 15-20 seconds. I insisted he come on November 26 (Monday) to look at it. He came on November 27 and said what I already knew – water was cycling through continuously. After looking outside, he said his crew put the gutter drainage spouts into the home drainage system, and there was a blockage in the drainage system. We should call Roto Rooter to get the pipe cleaned out. Roto Rooter came that day, and the problem was solved. We had tree roots in the pipe leading to the street. The sump pump was pushing water through the clogged pipe, and backing up to the area outside our basement wall, causing flooding. The heavy duty sump pump battery they installed, plus putting the gutter drainage into the drainage pipes, made the problem worse. After Roto Rooter came, we had no more problems. I reached out to Mike and then to All County Waterproofing owner Robert Praizner, as I was upset that they installed a $3200 waterproofing system that was not needed, and they never looked for alternate solutions – they just gave one solution: a $3200 waterproofing system. All we needed was the drain pipe to be snaked. An expert and honest company should have given other potential solutions for the problem, even if it did not result in a sale. We’ve had subsequent heavy rain storms, and the outside area remained dry – no water coming through the walls or window wells. There was no flooding outside the basement, because the drainage pipe was clear. I invited Mike and Rob over at any time during a storm to see for themselves. I’ve contacted Mike and Robert multiple times via phone and email to resolve this issue financially, and aside from one returned phone call from Rob, they have not responded to my request for resolution.

I am very reluctant to write a bad review but the No Show and No Call threw off my whole day. I took off of work, and even called and left a message them same day to let them know I would be home all day if they wanted to come by earlier. No response to my call and no show for the 530 appointment. At least call and say you can’t make it.

Robert's team did a very good job of cleaning and sealing the mold issue I had in my attic. The crew that showed up were very nice and left the job site quite clean. I would hire them again for future work.

The salesman came out and explained the process thoroughly. Of the three contractors we met with, he was the only one to look outside at the property to understand how the water was coming into the house. He talked us out of doing exterior waterproofing because of the cost and impact to the excessive landscaping we have that would all have to be replaced - as well as some patio areas that would be impacted. When the foreman arrived, they put up protection around the stuff we had stored in the basement, and drop cloths coming into the house and down the basement steps. At each phase of the project, he brought me or my husband down to see the completed work around the entire perimeter (not just a small section). So we got to see all the concrete chopped out, the trench they dug, the filter fabric, the perforated pipe, the stone backfill, the holes punched in every cinderblock and joint, and finally the sealed and completed project with two new sump pits and pumps. Once it's enclosed you have no way of knowing if the job was done right, unless you see every step as it's completed. They also connected the drains to a perimeter drain system that we have collecting the water from our downspouts taking it away from the house. A few days later one of the pumps was acting up and they came right over and replaced it. These guys are great, and I highly recommend them.

Description of Work
We needed a French drain installed.

The job went great and at first I was very happy with my decision, until 4 years later when I started to get water in the basement and garage area. After doing some inspections around the sump pump I would give negative stars if it allowed, as it was an epic failure. I just had to clean out 4 inches of mud out of the bottom of the pit due to their utter failure to do respectable work. With heavy rains coming make sure to check your sump pumps and drains if you used All County Waterproofing, would hate to see anyone get flooded out or have their pump burn out because of the atrocious work done by this company.

Description of Work
Purchased my house 5 years ago and needed a french drain and sump pump installed. Called All County Waterproofing since I knew the owner from our childhood.

Very well. Robert and crew were on site while the basement was flooding to deal with the immediate remediation, and then set to work on installation of the drainage system. They were courteous, professional, knowledgeable, and did a great job.

Description of Work
We scheduled the appointment. But they never showed up even after my follow up call.

We are a full service Heating and Cooling company. We employ Nate Certified Technicians, Epa CertifiedTechnicians. Our Home improvement License # is 19HC00144800. We also are a Lead Certified Contractor. Our Electrical Division License # is 11850B. Award winning.  …

Here at Advanced Basement Solutions, we sustain our business on quality and integrity. With over 35 years of basement waterproofing experience we are experts in our trade and are committed to quality from the beginning to the end of your project. We look forward to earning your business for your "wet basement" issues. We can help with your water, moisture, mold & structural reinforcement problem so you will never have to worry again.  …

NO DEPOSIT, NO PAYMENTS, UNTIL THE JOB IS DONE!! Avellino Custom Masonry, Inc., is a family owned business from Italy and has been in business for over 40 years (owned and operated by Billy Magro & Erin Walsh). Our company has a reputation for excellent service, and we will be happy to provide references upon request. The combination of our knowledge, professional equipment and the finest materials will give you an expert job that will last for many years. Our comprehensive services include brickwork, stone work, curbing, concrete work, paver/interlocking block projects, walkways, retaining walls, fireplaces and all types of waterproofing/drainage problems. The intricacies of drainage, construction and material selection require attention to detail and expertise in masonry plumbing. Avellino Custom Masonry, Inc. combines dependability and art to create construction you will enjoy for years to come.  …

We offer a wide selection of waterproofing methods. We also can perform any mold testing and/or remediation as needed in your home or office. We can repair your foundation from the smallest crack to a complete rebuild.

How is All County Waterproofing overall rated?

All County Waterproofing is currently rated 3.5 overall out of 5.

What days are All County Waterproofing open?

All County Waterproofing is open:

What payment options does All County Waterproofing provide

No, All County Waterproofing does not offer eco-friendly accreditations.

Does All County Waterproofing offer a senior discount?

No, All County Waterproofing does not offer a senior discount.

Are warranties offered by All County Waterproofing?

What services does All County Waterproofing offer?

All County Waterproofing offers the following services: We offer a wide selection of waterproofing methods. We also can perform any mold testing and/or remediation as needed in your home or office. We can repair your foundation from the smallest crack to a complete rebuild.

Are there any services All County Waterproofing does not offer?