Fountains
Exterior Painting
Garage and Shed Building
Chimney Repair
Basement Waterproofing
Excavating
Ceramic Tile
Licensing
Bonded
Insured
All statements concerning insurance, licenses, and bonds are informational only, and are self-reported. Since insurance, licenses and bonds can expire and can be cancelled, homeowners should always check such information for themselves. To find more licensing information for your state, visit our Find Licensing Requirements page.
Business Details 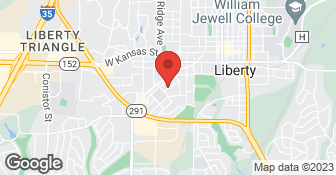 WE ARE HERE TO PLEASE OUR CUSTOMERS AND TAKE CARE OF THEM IN A PROFESSIONAL MANNER AT A REASONABLE COST / PRICE .....

Sonrise Masonry is an owner operated, family business in the Kansas City area. J.D. Rabuck, the owner, has 30 years experience in the masonry, stone, brick and foundation business. Whether it's a new construction project or repair work, we will provide our customers with complete satisfaction and a guarantee of services. No job is too big or too small. Call today for a FREE ESTIMATE!

We are specialists in masonry , We install brick ,cinder block , Stone And Stucco with color or natural , We Do Concrete , drive ways , side walks - we are are a family company we have 20 years of experience normally company’s give a one year guarantee we give you Two Years guarantee , We have a lot of satisfied costumers and we also have a lot of good references so if you guys need opinions you can always contact them

DESCRIPTION OF WORK
I have battled Executive Design for over two years. I gave them more money than I should have up front, and they did roughly 15% of the work before leaving my home in a state of complete disrepair, and in a worse condition than before they started, and never coming back to either finish the work. What they did do before leaving was NOT up to code, and has left me not only with unfinished work, but actually in a worse position than if I'd ever had them begin what work they did. I have had many promises from the owner as to dates dates and times that the situation would be rectified, but all have come to nothing. I am now needing to sell my home within the next year, and will have to spend a minimum of two and a half times what I already paid them to get the house in a position to be sold without losing the large amount of equity I had in my home. To add insult to injury, the owner, Tim Garbelman, treats me like I am the unreasonable one, aftee giving him over two years to make things right. Every commitment he has made, regarding scheduling and completion dates, has not come to pass, and yet I get told 'Why are you kicking me when I'm down?'. I am the injured party, the widow with a son, trying to make my home NOT a place of chaos, and I get treated like I'm not giving him a break, though I have given him almost two years to make this right before pursuing legal action. Almost anyone would have done so long before now. I imagine he treats the clients spending far more money differently than he treats me, and he has told me to my face that he has done to me what he has because he knew I was nice enough to take it. All I've wanted is what I paid for, and what he agreed to give me, but instead I have been left with my home in an upside down state, and my finances in ruin. I have both the pictures, witnesses, and contracts/emails to back this up. Unless this is corrected, which I expect it won't be, yet again, without him blaming me for his own failures to both communicate and finish what he got over 11,000 dollars of money and materials to do, I cannot, in good conscience recommend this company's service, or anything associated with Tim Garbelman. I will be shocked if he doesn't get irate and blame me for this review, even though I have been beyond patient, and tried, out of a sense of kindness, to give him chance after chance to fix things.

I hired this contractor for two jobs at the same time.  The experience was beyond the pale.  I read the other two reviews.  It was bad as that and more.  In the first job the hardwood flooring was refinished and started peeling.  The plumbing was a hot mess.  He was going to repair them tomorrow, and tomorrow and next Thursday and never.  The Attorney General of MIssouri is suing him on the second...

DESCRIPTION OF WORK
He was supposed to do a long list of reno on two separate properties (details below).

DO NOT USE TIMOTHY S. GARBELMAN OR EXECUTIVE DESIGN FOR ANY WORK!!! They were contracted to refurbish a house from the basement to the roof. A quoted 45-60 day job quickly turned into a 7 month fiasco. At the end of 60 days he was no where close to completion and no where to be found. Tim Garbelman and Executive Design is a slick operation and should not be trusted. I did, and I got burned and tak...

DESCRIPTION OF WORK
Contracted to refurbish a house

DESCRIPTION OF WORK
DO NOT USE EXECUTIVE DESIGN FOR ANY CONTRACTOR SERVICE!!! Executive Design and Tim Garbelman promised on goods and services they could not provide. I hired them to refurbish a home in Independence Missouri, from basement to roof. The work was conducted extremely slow and was NEVER finished. A quoted 45-60 day job (according to the contractor)turned into an 8 month extraordinarily frustrating experience in which they did not show up to the property, return calls, emails or texts. Multiple excuses were used in an attempt to justify the lack of progress, all presented in a very heartfelt and deceiving fashion. Tim Garbelman and Executive Design NEVER finished the project. The materials used on the work that was done was below industry standard and had to be replaced, totally redone. That includes all plumbing, electrical and all wood working and carpentry that was done in the house. While replacing some dry wall because of poor workmanship, it was descovered the plumbing and fixtures were never secured to the wall in any way, neither were the framing boards. It was just there in the wall, loose. Cabinets that were built were of such horrible construction they were torn out and replaced. The whole house had to be repainted because Executive Design didn't prime the areas and said it really didn't need it. Not to mention the paint job was absolutely terrible and would have to be redone anyway. I asked over and over for receipts for the materials purchased and labor used and never once received one. Tim Garbelman and Executive Design took my money, made promises they didn't keep then used my money to finish other projects. Not only did it cost me for Executive Design but I had to hire another contractor to correct all the mistakes and replace all the substandard materials used in this project. The workmanship was horrible, responsiveness and professionalism was just as bad. Also, I made it perfectly clear I wanted to keep some items that were in the house. I made a list and told them to put them aside (including an air conditioning unit and an old fashion bath tub) and I would remove them from the property. These items were taken from the house and either sold or used for another purpose and never seen again. In other words, stolen! I could go on citing many examples of the fraud, deception, lies and misrepresentation that occurred during this project. This is a very slick person and operation and I was taken. I subsequently filed a judgment, trying to recoup some losses, only to find out Tim Garbelman and Executive Design have many, many similar judgments and convictions against him already. I thought I would give them the benefit of the doubt one more time to make things right. I met with him and we came to a monetary repayment agreement that was well below the total of my expendetures for the project and well below what Tim Garbelman of Executive Design told me he could afford. He promised me and my attorney (in writing) repayment beginning on specific day, and has yet to remit anything. DO NOT GET INVOLVED WITH TIM GARBELMAN OR EXECUTIVE DESIGN.

He was to paint the outside of my house ,which include scraping, pressure washing & caulking the house before painting& then move directly in to remodel my bath where he was removing a window for the painting outside. He sent 2 druggy looking people over to scrape the house(they left all the paint on the ground ,porch & drive) about a 2 weeks later the same 2 came out & caulked the house(it still ...

DESCRIPTION OF WORK
On sept 16th 2014  Timothy S Garbleman took a deposit of $550 to  scrape , power wash,& caulk & paint the outside of my house. This included taking out a window & some minor shingle repair. also took a 750 deposit so he could immediately move in to the bathroom to remodel it .

FROM YOUR FOUNDATION TO YOUR ROOF...