Tree Service
Lawn and Yard Work
Landscaping
Leaf Removal
Lawn Fertilization & Treatment
Snow Removal
Licensing
Bonded
Insured
All statements concerning insurance, licenses, and bonds are informational only, and are self-reported. Since insurance, licenses and bonds can expire and can be cancelled, homeowners should always check such information for themselves. To find more licensing information for your state, visit our Find Licensing Requirements page.
Business Details 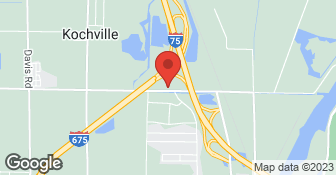 When you contract Heinz Tree Service, you can count on professional, quality and affordable service. One of the reasons why our costs are so competitive is because we carry a complete line of equipment to make sure the job is done right....

As a Multi Year Super Service Award Winner, Custom Lawn Care is a local and family owned company that provides customized lawn care programs and additional services within the Flint, Lansing, Saginaw and surrounding areas since 1988. We try to surpass our customer’s expectations with every application, no matter how much we continue to grow. We treat all lawns with exceptional detail and service both residential and commercial properties throughout Mid-Michigan.

Locke’s Landscaping provides outdoor living and enjoyment to discriminating tastes. We understand that a beautiful house can be a “canvas unfinished,” simply a beautiful house. A professionally landscaped house becomes a home, an invitation not only to friends and family, but to nature itself, in creating a tranquil outdoor retreat from the stresses of everyday life–right outside your door.

Went ok. They got the job done in stages.

DESCRIPTION OF WORK
Removal of trees

Very well and the crew was fast and efficient.

DESCRIPTION OF WORK
I have very large silver maple and was concerned with a big storm may have one of the limbs break away and land on one of the houses, so I told Britt  could he cut the limbs back 15 to 20  feet, which his crew did.  they had filled some holes with insulation, and had the clean up everything in an hour!  Great job and they were the most reasonable for the price.  My tree is probably 75 to 100 years  years old.

Very well from getting a timely estimate, a call soon after to schedule the work and a nicely finished job. We got 2 estimates from tree removal services and theirs was almost half the price of the other company! We are new to the area and had no idea were to start looking for someone to remove these dangerous trees. Highly recommend and very satisfied with Heinz Tree Service and Angies List.

DESCRIPTION OF WORK
Removed 6 very large dead trees from our residential property, ground stumps, hauled away wood. When finished, there were some tracks left on our lawn from their equipment so they raked the yard, brought in black dirt and re-seeded lawn and even took the time to use a blower on the street in front of our house to clean up debris...which pleased our neighbors!

Nice to deal with,would recommend them !!

DESCRIPTION OF WORK
They removed a large old growth elm tree in my back yard and a small maple, removed the stump for both...Also, removed 3 other stumps,1 in front ,2 in back....Did a good job as I used them years ago on an insurance deal...Neat and clean as you can be with that stuff...They took all cuttings and so forth as well....

After calling three times over a two week period, they told me they can't do the job. I wanted two small stumps ground out. I called and was told someone would be out that day or the next for the estimate. No show. Later in the week called again and their estimaters were out of town and would call me back. No show or call again. Called a WEEK later and was told that if they don't cut the tree down...

DESCRIPTION OF WORK
Nothing