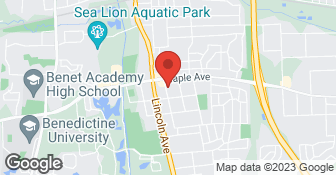 We are family owned and operated specializing in tree removal, tree trimming, lot clearing and stump grinding for both residential and commercial properties. With over ten years in business, we guarantee outstanding service on any job, big or small. We have eight current employees and subcontractors, our billing procedures are after the work is completed, and the customer is satisfied, we collect payment by credit card,check or cash. Ask us about our specials and don't forget to mention the 5% savings on any project to Angie's List members. We also do snow plowing and snow removal over the winter months....

I was satisfied with their service.

They were excellent! They did what I asked them to do and I highly recommend them.

They called to set up appointment and were no shows, waited several hours to show up, no phone call and no answer when attempting to call

Unfortunately we do not have any paperwork for this in our records. We did see a lead that went out to 4-5 other tree companies typically. We answer our calls and emails 7 days a week and we do not have anything in our email or on the computer to T&M Tree directly. I think there was a mix up of companies. Please call or email us directly and we will get back right away , we always respond right away for the last 15 plus years .
5.0

Went well - on time and clean up was very good.

I called several tree services for aid. T & M answered the call immediately and came over that day to inspect. His concern was different from mine and he had to come a second time, which he did, on a Friday evening. He cut down the leaning tree immediately so no children could be hurt, and his team arrived the next am promptly at 8:30. They cut down and removed both trees and stumps, did an excellent job, and were finished in a few hours. This was expensive but I think all tree services run similar rates. The closest other service did not respond until late when I was on the phone with the doctor, and called the next day after the job was already completed. This team demonstrated professionalism and competence. I know who to call next time!

Description of Work
Tree had fallen to 45* angle and another tree was cracked and at risk of falling on house.

We had a tree branch that had cracked over the winter that was out of reach and a lot of cut brush in our backyard that I needed removed/shredded. First, I would say they were extremely responsive via email. With the quarantine starting, they did a great job using pictures I provided and came by for an outside walk through to come up with a quote. Setting up an appointment was very fast and easy. The quote they provided was extremely reasonable. They were respectful of our yard, putting down plywood so their machines didn't damage our yard. I would say when I need tree/landscape service again, they would be the first ones I would call!

Did not hire them this time, but have used them before and they are great.

Had contact on a Tuesday evening, though booked with jobs on Wednesday they were out first thing to get the limbs off that were resting on the house. They completed removing everything on Thursday. I appreciate the concern they showed for getting those resting limbs off ASAP even though they couldn't do most of the work until Thursday. Thought they were a tad pricey but was worth it for the immediacy at the time and the concern they demonstrated.

Description of Work
Neighbor's tree fell and partly came to rest on our house. Removal of tree and other non-related trimming

Tree removal including lot clearing, tree trimming and fine prunning, stump grinding, seasoned firewood for sale, snow plowing: residential which we use plows trucks and snow blowers for the best job, and commercial with plow trucks both dump and pickup

No, T & M Tree Service does not offer eco-friendly accreditations.

No, T & M Tree Service does not offer warranties.

Are there any services T & M Tree Service does not offer?