With Angi since January 2010 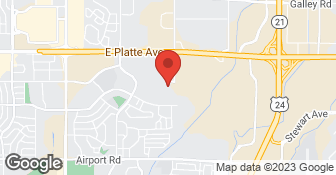 A1 Garage Door’s focus is to provide the highest quality customer service in repairs and replacement garage doors and openers. As a Family owned business A1 Garage Door Specialists has made the highest quality customer service the core of our business, A1 realizes that there is no better or more effective advertising than customer referrals from satisfied customers. Because of this A1 has a very high number of customer referrals on a daily basis. Thanks to you our customers we also are a accredited member of the Colorado Springs Better Business Bureau....

They were professional and responsive with the estimate process.

Description of Work
Have an old tilt-up door that needs to be replaced.

They were fantastic. I would use them again. They were professional.

Description of Work
They replaced my garage door.

I highly recommend A1 Garage Door Specialists! I was extremely impressed with our service from A1. Destiny provided excellent customer service from the second she answered the phone. She was very professional and pleasant to talk to! She was able to get us on the schedule for the next day. When Travis arrived to fix our garage door he was courteous and clearly a seasoned professional. He was extremely knowledgeable and took the time to explain the problems with our door and his detailed plan to repair it. Travis did an amazing job and our garage door is running smoothly now and is SO quiet! I couldn’t be happier. Thank you A1!

Excellent! Ryan (owner) and Mark (installer) were professionals in every way! Great price! Courteous, prompt service! Insulated doors with glass windows look beautiful and operate as they should. Couldn't be happier with choosing A-1!

Knew just what to do; fixed quickly and effectively

Ryan & Joe showed up promptly to assist us fixing the garage door opener. Since we had replaced the sensors and the garage control would still not work, we assumed it was in the wiring. We were too frazzled to work on the issue anymore as we were wanting to put the rental on the market. Ryan & Joe felt it was in the wiring as well and rewired the safety eyes and that fixed the problem! We were pleased to get this resolved so quickly.75.

Description of Work
Needed help troubleshooting a garage door that would not open. We replaced the sensors but still did not work.

The gear sheared off that drives the chain on my garage door (Friday afternoon). Called A1 and was told they could have someone out 1pm the next day (Sat). Other places I looked at on line only had the next available appointment for Tuesday. Luke came on time and said he could replace the gear shaft, or if I wanted, the whole unit. The springs were also bad which is what caused the problem. Been like that for a while. He automatically applied the $75 off coupon for new springs. Total job was complete within an hour. Told me different warning signs to look for in the future with the unit. Did not try and sell me a new system. Very straight forward.

Great! Mark took care of us in a timely manner. Very kind, courteous, professional. Told us about online coupon to save us a few $$. Very happy with A1.

A1 was very helpful and informative in this process and helped me get the correct amount covered by my insurance company. I felt the person who came out to give the estimate was thorough and went above and beyond, even checking out other issues that were not part of the estimate. The person who did the actual repair was also very competent and knowledgable. The office staff is also good and very responsive to my emails. I got 3 estimates and did my research on even more companies, and A1 came out at the top for me. I will definitely call them for any future garage needs.

Description of Work
I needed a garage door replaced as part of an insurance claim.

I took advantage of A1's web special for a LiftMaster 1/2hp Belt Drive, installed, for $339 + tax. Prior to scheduling the installation, I contacted the office and asked what model they would be installing, and confirmed the price. A1 was able to schedule the installation for the next day. When the installer showed up, he mentioned that there would be an additional $15 fuel charge. While discussing what all he would be installing, I mentioned the keypad that comes with the model I had been quoted, but the installer said that the keypad was a $50 additional option, and that he would just be providing the opener and a single remote. Now I had researched the particular model, and the LiftMaster website said that the model comes with a keypad and two 3-button remotes. I thought that it might be possible that as a dealer, there might be a less expensive model variant that only contained the opener and a single remote, but when I watched the installer dump out the box, low and behold a keypad and two remotes were indeed in the box. I contacted the office and asked for clarification on the fuel charge, and asked why I was being told that accessories that come with the model that I was being provided were being removed and offered as additional charge items. After a little discussion I was assured that I would not be being charged the fuel charge, and that I would be receiving all of the accessories that come with the model of opener I purchased. I received everything I was expecting, and for the price agreed, but if I had be a little less informed, I would have been charged too much, and wouldn't have received everything I was entitled to. I'm not too sure whether to chalk this up to a misunderstanding or not, but I would recommend that other patrons of A1 make sure that they know what they are buying, and what they have agreed to pay.

Above the Rest Garage Door Repair

We are a family-owned business that’s been awarded the Super Service Award EVERY year since 2010! We provide affordable rates and timely service to our neighbors in the Pikes Peak region and you can rely on us to do the job right. Our technicians are reliable and trustworthy, and they have all passed background checks. They are sure to keep the work site clean and provide you with a free, no obligation estimate prior to starting the job. If you are looking for a new garage door or garage door opener, we represent the top door and opener manufacturers, providing you with countless options for your residential or commercial properties. Furthermore, we are extremely familiar with property management protocol to ensure the tenants receive prompt and professional services while the homeowner is not left in the dark with excessive unexpected expenses. We are fully licensed, insured and in good standing with both the Better Business Bureau (A+ rating) and the IDA (International Door Association). Please give us a call, we'd love to take a look at your door!  …

Insured
All statements concerning insurance, licenses, and bonds are informational only, and are self-reported. Since insurance, licenses and bonds can expire and can be cancelled, homeowners should always check such information for themselves.To find more licensing information for your state, visit our Find Licensing Requirements page.
General Information
Free Estimates
Yes
Eco-Friendly Accreditations
No
Payment Options
Check, Visa, MasterCard, American Express, Discover
Warranties
No

How is A1 Garage Door Specialists overall rated?

A1 Garage Door Specialists is currently rated 4.9 overall out of 5.

What days are A1 Garage Door Specialists open?

A1 Garage Door Specialists is open:

What payment options does A1 Garage Door Specialists provide

No, A1 Garage Door Specialists does not offer eco-friendly accreditations.

Are warranties offered by A1 Garage Door Specialists?

No, A1 Garage Door Specialists does not offer warranties.

What services does A1 Garage Door Specialists offer?