Founded undefined • With Angi since November 2014

We Go Out On a Limb to Get to the Root of Your Problems" Our services come with a free diagnosis to ensure that we will be able to address your tree concerns. With more than a decade of experience in the field of arboriculture, The Hungry Tree LLC will know just the right solution and treatment for your tree requirements 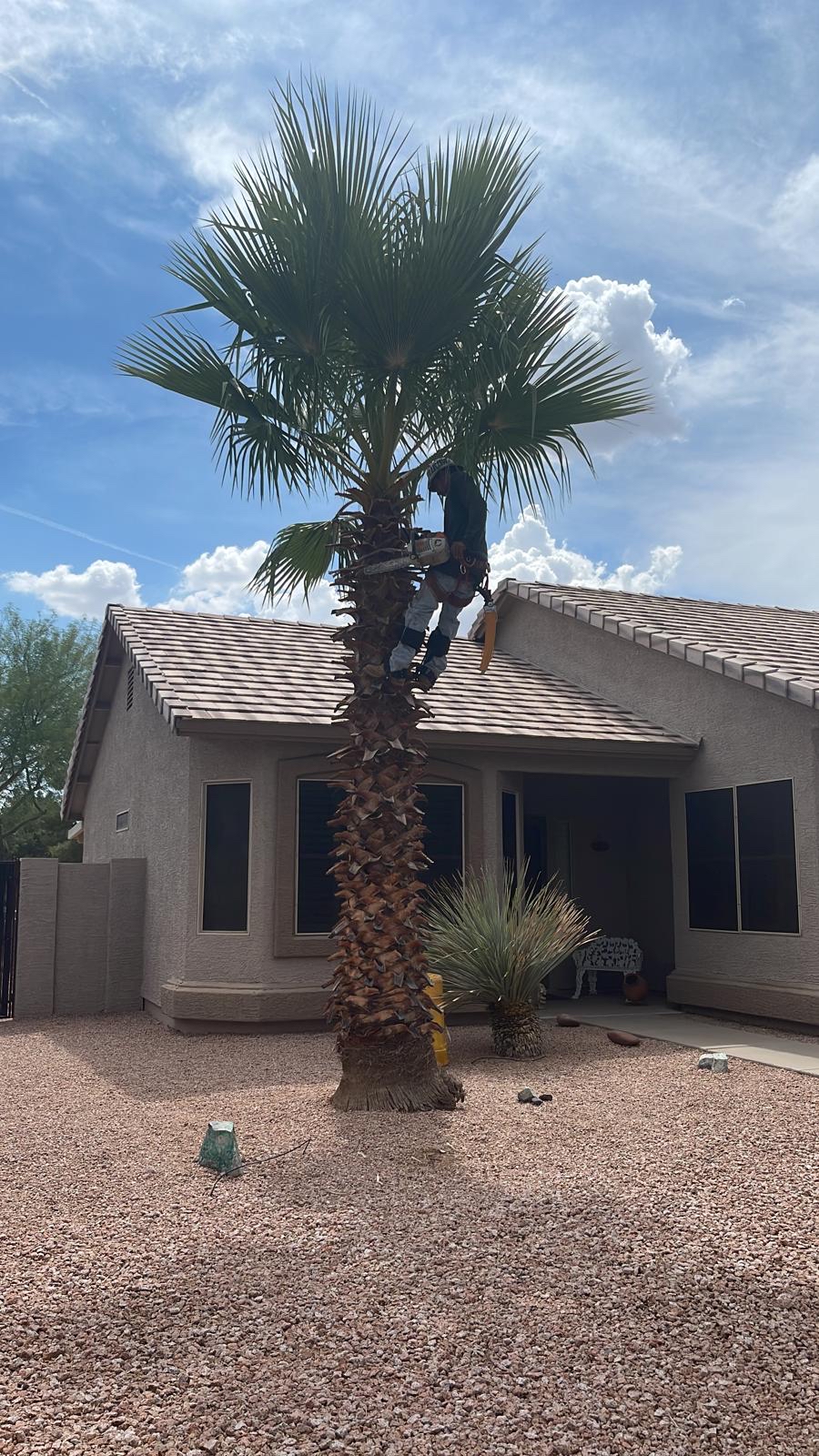 Juan and crew did a fabulous job. Very dependable, fair in price and cleanup immaculate. Tree looks great! Dont forget to tip the crew. Will hire again. Thank you!

The tree looks great. They came out for an estimate the same day I called and were out 2 days later for the service. Highly recommended

Outstanding. Their estimate was same day I called for estimate. Work began three days later. They came on time and worked very professionally and diligently. Cleaned up frequently including the pool that had some leaves and branches being trimmed. Price was very reasonable and definitely hiring them for regular landscaping work and recurring tree trimming. My go to company now. Definitely worth the call and their effort. You won’t go wrong

They did a great job I highly recommend them.

Always excellent service. Fair pricing and highly professional. Exceedingly knowledgeable about plants and trees including diseases and bugs and the ability to correct the problems. Know how to prune and crown clean trees for their health. Deep root feeding excellent. They leave your property very clean when work is complete. Have used this company for 20 years. Highly recommended.

Excellent, I have worked with the Hungry Tree for over fifteen years. Juan Martinez, the owner and arborist, personally oversees the trimming of the trees and the selection of the specimen trees for planting. It is a pleasure to work with a person who really cares about the plants and the customer.

Excellent. We have used Juan and his team for several years for our trees. Responds to us quickly and reasonable rates. Juan is skilled, knowledgeable and can answer questions and provide suggestions. Skilled people, respectful of your property, focused on task, always on time and if late will call . I called Juan this time to remove large tree hit by microburst. Appointment made within 2 days. arrived early, talked to me first, looked at area and got to work quickly with team, completed tree removal and clean up in less than 30 minutes.

Description of Work
Removal of down tree

This is my first experience using Juan of The Hungry Tree and I couldn't be any more satisfied than I am with his work. He is knowledgeable, conscientious in his work, and reliable. He and his men are hard-working. Juan made sure everything was done properly and that everything was cleaned up after he was finished. I would heartily recommend him if you need work done on your trees.

Have used Juan for years. Best service from any tree/landscaper company in valley. Honest, diligent & timely service we have ever received. Also saved one of our trees!

Juan saved our one tree with his expertise and provides excellent service and professionalism.

I have been using Juan at The Hungry Tree for many years; this review is way overdue. I don't know where to begin. Juan is probably one of the top two or three contractors my husband and I have ever used... for anything. He is INCREDIBLY knowledgeable about trees and landscape. He has saved trees for us with proper diagnosis and treatment. He has recommended and installed plants and trees to replace others that were inappropriately planted. Everything he touches grows beautifully and thrives where other things have not. He and his crew are professional, friendly, arrive as scheduled, do a thorough cleanup, and take pride in their work. I hope Juan does not plan on retiring anytime soon, as finding a replacement for he and his crew will be an impossible task.

Description of Work
Trimming trees in preparation for monsoon season.

The crew of men were on time, were very efficient. The job was done to my satisfaction. I am very happy with The Hungry Tree. I will absolutely hire them again and will refer others to their company.

Juan and the folks at The Hungry Tree did a fantastic job. Juan was able to help me make a plan for how to properly water and fertilize our plants. He didn't try to up sell me anything. They were punctual when they contacted me and when they showed up to do the work. They did the work quickly and our trees look great. I am very happy with the quality of the service and the price was very fair in my opinion. I would highly recommend them and I will hire them again if I need tree care. My wife and I are glad we called them. Thanks!

Description of Work
I needed to ***** whether our cypress trees could be saved. We ended up removing 3 cypress trees and having two palo verde, 1 mesquite and 1 other tree trimmed. I also needed a lot of advice regarding watering, tree, lawn, and shrub care.

The representative came to my door And immediately mentioned how far I was located and how much gas it cost him to get here. Then he said it’d be $100 to remove the one branch. I told him I only had $80 so he agreed to take that. It took them 8 minutes to get the branch in there trailer. There was no additional clean up and at $10 minute I think there should have been. At the door he told me how they do really big jobs and mentioned the gas to come here again. I got them off Angie’s list after entering my address so I had no idea where they were located. Also, they could have told me to go elsewhere on the phone if I was to far from their yard. I found it unprofessional to complain about it. Yes they removed the branch quickly and the reseptionest was nice but I wasn’t left feeling like I’d ever want to use their device again.

Juan,the owner was punctual and his workers were very good, including a thorough cleanup. The pricing for the job was fair. I would recommend this company for Tree Services

Juan told us what was going on and suggested treating the tree for disease and trimming out the dead branches. His crew did it all and cleaned up everything and then suggested we just let a soaker hose water for 5 hrs. I would highly recommend Juan anytime

They explained the problem, how to resolve and did the work. They were extremely courteous and so prompt, they came early! They called to confirm the appointment then called to ask if they could come early. Work was done quickly and they cleaned up.

Description of Work
My lemon tree was dying.

Typical bait and switch. We needed a tree removed after a storm. They had us email them pictures. I sent a bunch of pictures from different angles and distances to give a very good idea of the project. The price estimated was fair and we scheduled a day and time. The day finally arrives, only Juan doesn't arrive with his crew, as they indicated in the previous night's call. Instead it was just him telling me that the tree is much larger than he expected. Then what were the pictures for? They were very accurate and included our house and cars for scale. He goes on telling me about how much bigger the tree is, how much more it will cost him at the landfill, etc. Even the prices that he was telling me about the landfills were a lie. (You know we can check landfill prices, right?) The quote went up from 900 to 1400! How much bigger was the tree? We knew that the quote could vary a little bit, but that is a crazy jump. We had other companies come out and give real in-person quotes and NONE of them were even close to the new "estimate" from Juan. Oh, and that work that was suppose to be done that day, now couldn't be done for almost another week, even if I was a big enough sucker to go for the new price. It felt like they know everyone has trees down, being monsoon season, and they just don't care. It felt like a shakedown. Since they have people lined up for a week or two they can afford to jack up the prices on arrival. I'm sure plenty of people are stuck in bad situations with their trees being down and they have little choice. Really shady. We emailed and left a voicemail after he left this morning which went completely unanswered. All of their actual price quotes were given by phone and verbally in person, never in writing. I cannot recommend doing any business with this company. There are others out there with much more integrity.

They did a great job despite the heat and hardness of the ground. After removing the stump they also repaired the irrigation line that got tangled up in the stump.

Juan did a great job. Removed the entire tree and all the debris. He had a cancellation (there were hundreds of trees damaged in the monsoon) and showed up at my house early. His office staff are very responsive and freely too. Fair, honest company!

Description of Work
Removed 20' tree that blew over

Because of the substantial storm of August 2nd, I ended up with a toppled Chilean mesquite tree in my front yard. I called around for tree removal companies and received quotes from $700 to $1,000 and up to a month wait time. I sent The Hungry Tree an email asking them if they could do the work. They initially gave me an appointment of August 16th and I felt that this was a reasonable time due to the amount of work that they had. Stephany told me that she might be able to get me in sooner. When I called a short time later to get a quote, she requested a photo for the arborist to estimate from. I sent her the photo and told her that the tree had mostly been sectioned up so that we could use the garage. When Stephany called back minutes later, she said that the arborist could be at my house in 30 minutes and give me an estimate in person. I agreed. A short time later, Juan Martinez arrived and told me that he and his crew could have it cleaned up within 30 minutes and at a price no one could come close to. I agreed and they had the front yard looking immaculate within 30 minutes. They cleaned up the street in front of the house and the neighbor's driveways. I haven't been this impressed with a business in many years! If you need tree service or tree removal in metro Phoenix, call The Hungry Tree. They are professionals who care about their work and satisfying customers!

Description of Work
Tree removal and clean up