Member Vicki Monjure of Cypress, Texas says H-Towne & Around Remodeling was a big help in all phases of integrating a covered patio into her house.

Vicki Monjure of Cypress, Texas, wanted to integrate her covered patio into her house to take the place of a small breakfast room, which had been small and basically unusable. She knew she had several steps to follow to make it happen, including a series of homeowners association requirements and a complicated task matching different slab levels.

When she hired highly rated H-Towne & Around Remodelers of Cypress for the job, owner J.R. Smith helped her with an array of issues. “This wasn’t the first time we’ve worked with J.R. on a remodel, and I’m happy to say it will not be the last, she says.

J.R. helped from the start, securing HOA approval. “J.R. met with all the members and fielded their questions until they were satisfied and gave the go-ahead to proceed,” she says.

She says the $40,000 job proved to be more complicated than expected because her HOA had specific roof line requirements, adding to the scope of the job, but H-Towne rose to the challenge. “In the end, the exterior changes included the roof line, gutters and brick,” she says. “The interior changes included a support beam, five full-length windows, French door and two archways.”

Monjure says Smith particularly excelled at the unexpected challenges that arose during the complex remodeling project, such as matching different slab levels on the floor. “His integrity is unimpeachable,” she says. “Anything we questioned or changed, he was even-tempered, patient and willing to do what it took to satisfy our expectations.”

She says she recommends him to everyone she knows. “If you’re looking for a contractor, I think you’ve found your guy,” she says. “You’d better act quickly, though. His dance card is probably getting mighty full.” 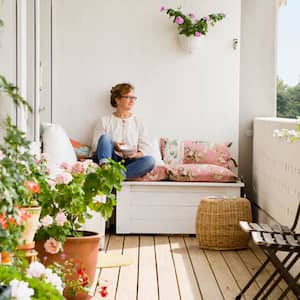 11 Plants Practically Made for Your Patio

Plant some (or all!) of these patio-perfect plants this year