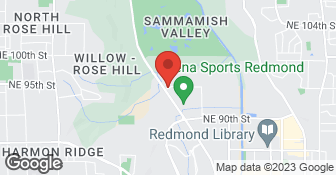 With over 15 years of professional painting experience, we are here to address all your painting needs and wishes. Residential and light commercial.  …

Jack Fecker/Founder - Jane Bakken/Owner - 425-830-6695 Andrey Stepanchuk/General Manager - 206-518-7540 Known as the top-rated painting company in the Puget Sound area through Angie's List with over 900 'A' ratings in 13 categories, Jack's Ever GREEN Painting Corp. has built a reputation through the years for our high standards of quality and stellar customer service. Founded by Jack Fecker in 2008, respected painting contractor/owner since 1992, our team takes pride in serving our community by enhancing the beauty of neighborhoods, one home, one building at a time. We employ the best painters year round which ensures our on-going reputation of integrity and trustworthiness. Our mottos in the market place are always "We have FUN painting!" and "We look forward to serving you!" *We are a full service interior and exterior home painting company that will also perform deck painting only in conjunction with an exterior painting service. Areas Serviced East King County Corridor: North Incl. Woodinville/Bothell; South Incl. Renton Highlands; East Incl. North Bend/Snoqualmie; West to Lake Wash. Spring/Summer - Focus only on East KC corridor Exteriors Fall/Winter - Include Seattle Metro Area  …

We have the experience and dedication to bring your dreams to reality! Specializing in Painting Services, we guarantee your satisfaction, and we won’t leave until the job is done right. We pride ourselves on the quality work we provide, while delivering great customer service! Call or click to schedule a free estimate today!  …

The painting and installation of my new door turned out to be a farce. They twice reinstalled the hardware on the door incorrectly (first time you could not lock the door, second time the handle kept sticking, so you couldn't open the door even when unlocked). Some paint on the inside of the door also got scuffed as the hardware was being reinstalled. The handyman didn't sand down the area or tape the hardware before doing a touch-up and ended up leaving white paint on the brass fixture as well as obvious brushstrokes and a mottled paint texture in that area. They reinstalled the fittings crookedly on the outside and after I pointed this out and they fixed it, there was an unsightly line (dent) in the paint from the original crooked placement. Worst of all, after I complained to our HOA representative, a man identifying himself as the president of the company left an aggressive and obnoxious voicemail telling me I had to "have realistic [apparently, lower] expectations" and that they "were doing the best they could" (which could very well be true!). In the end they gave me the rest of the can of interior paint and I'm going to attempt to fix the interior myself. I'm stuck with the exterior looking as it does. The individual handymen who came by (at least half a dozen over the years) were always very nice and polite - they seemed like good guys. The problem was that they were also clearly overextended - cell phones constantly ringing and interrupting their work, literally sprinting away to the next assignment, etc. I got the impression they were forced to work as quickly as possible doing a just "good enough" job to get by rather than really focusing on doing each job well. If it weren't for my HOA going through this company, I would never have used them based on earlier experiences and the general reputation they have in my community.

Description of Work
My HOA contracts with Lower 48. They were asked to repaint the exteriors of our front doors several years ago. For some reason the paint on my door kept bubbling up, drying, then flaking off - very unsightly (a third party repairman I spoke to said he believed they used the wrong kind of paint for the metal surface). It literally took about 3 years for Lower 48 to admit to any wrongdoing and attempt to fix the problem. They tried sanding and repainting the door several times, but without success. Eventually they agreed to pay for a new door.

PAINTED WINDOWS SHUT AFTER AGREEING THAT THEY WOULD NOT DO SO. SLOPPY WORK: PRIMER ON WINDOWS, PAINT DRIPS ON BRICK. THEY WERE REASONABLE ABOUT HOW MUCH THEY WANTED FOR THE WORK THAT THEY HAD DONE AFTER WE TERMINATED THEM.

Description of Work
OUR CONDO ASSOCIATION HIRED LOWER 48 TO PAINT THE EXTERIOR WINDOWS OF OUR BUILDING. WE EMPHASIZED BEFORE AND AFTER HIRING THEM, AND WHILE THEY WERE WORKING, THAT WE HAD SPENT THOUSANDS OF DOLLARS TO HAVE OUR DOUBLE HUNG WINDOWS REPAIRED THAT HAD PREVIOUSLY BEEN PAINTED SHUT, AND THAT THEY MUST NOT PAINT THEM SHUT AGAIN. DESPITE ASSURANCES THAT THEY WOULD NOT PAINT THE WINDOWS SHUT, SEVERAL OF THEM WERE PAINTED SHUT. THEY WERE ALSO SLOPPY IN THE WORK THAT WAS DONE. WE TERMINATED THEM BEFORE THEY FINISHED THE WORK.