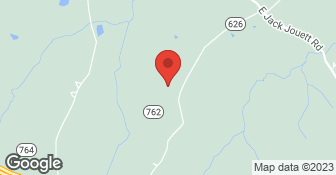 We are family owned & operated, and the owner is present at every job. 18 years experience. We are very particular and always give our best, as we dont believe in taking shortcuts. ...

more than 20 years of experience talks for itself, call to find out.  …

David Gomez Painting proudly serves the Charlottesville metro area. We have over 8 years of experience in painting & drywall work. Our prices our very affordable without compromising quality. We treat your home like ours.  …

Did a wonderful job. Spent the whole day pressure washing our home as well has brushing the tough areas. House looked fantastic. This is the 2nd time using the company and will continue to use again.

They did a fabulous job. They even considered the weakest part in any concrete stairs, which is where two rises meet. The cut back the soil, so that it was at least six inches thick at the thinnest point. Rebar and metal fencing of course. There was a bit of concrete ridges on the edge of some of the stairs, where the the cream got between the edger and the forms. No big deal. I'll take an angle grinder with a masonry disk, and grind that off. Looks great.

Description of Work
Outdoor concrete stairs. While they had their Bobcat at my place, they regraded my gravel driveway for only $100. It had a high place that was preventing proper water shed. Now it looks new :)

Work project involved replacing badly weathered steps and unsafe hand railing for a front entry way porch and back deck.as well as tear down and rebuild side entry porch. Chuck Burrus, co-owner, provided a prompt estimate for the work project as well as schedule within a week. Chris Mawyer, co-owner, completed work project in one day with a man crew. Both owners were supervised the work project. Job site was left clean with all waste and debris removed.

Danny and Derrick arrived on time. They were here to do several "handyman" projects we had identified where we required help. They listened to my list of jobs for the day and went to work. The vent duct installation required being in a low profile crawl space for a couple of hours. The work was done professionally without complaint. For our ceiling fan project they had to work in an attic that was at least 120F. Again they worked with no complaint, tho I made sure they were hydrated. The other two projects were done equally well. The were respectful of our house and made sure to clean up their work areas and hauled out their trash when they left for the day. The company owners, Chuck and Chris, visited our house twice before the work was done. They were pleasnat to talk to and seemed genuinely interested in assisting us to improve our property. The only downside was that they are so busy that it took awhile before we could be serviced by them, However, the results were worth the wait.

Chuck, Chis and their crew were on time every day, performed way above average work, were meticulous in their detail, and thoroughly cleaned up after the job was finished. I would highly recommend this team for any of the services they offer.

Description of Work
Installed large concrete aggregate steps down hill beside house from driveway to back of house and continued on with 20 X 12 aggregate patio.

I called the provider in the summer to schedule for an estimate to be performed in the week of August 18. The provider said he would check his availability and then get back to me. He never did. I ended up calling another provider to get the work done.

Description of Work
Never did the work, didn't get back to me on scheduling.

Called the provider to schedule an estimate, and left a message. The provider called back and said we would meet that Thursday or Friday since they would be in Charlottesville. I did not hear from the provider. They called the following week, at 5:00, seeing if we could meet them 5:30. My fiance met him. We did not hear from them after a week so I called. Chuck answerd the phone and said, "Oh yes, I remember you guys. I told your fiance to give me a call!" I asked my fiance about this, and he said that Chuck would call within a day or two. hmmm. During this conversation, he said I can call his wife to get the estimate emailed. I called his wife. She took my information but I did not get any information. I called the next day, and he said that he would have to come out again and get measurements, and that my fiance didn't tell him how big he wanted the deck. I scheduled for Friday. When I spoke to my fiance that night and told him what Chuck said, he told me that he told him he wanted the deck extended another 6 feet to the AC unit. Lie #2. I sent a text and told him that nevermind, we don't need the appointment. At this point, the reliability and trust was shot, and if I went forward, I would be asking for it. Maybe they aren't this bad with other people they service, and we just got the raw end of the deal. Don't lie, be prompt, be professional. That's it.

Description of Work
Tried to get an estimate, that never happened, but i did get the run around .

Job was done below estimated cost. He arrived with a large enough crew to complete it less than one day and cleaned up everything!

Description of Work
The contracted replaced all fascia board encircling the home which had rotted from contact with the ground. He correctly placed flashing against home exterior wall and used pressure treated lumber so it would last a long time.

They were very good explained what they did, cleaned up and were very professional. Will definitely use them for other repairs. There price was very competitive .