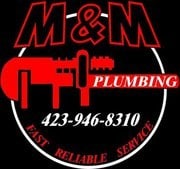 We are a full service plumbing company. We offer up front pricing so you know what the job will cost before we start! Owner & operator by Mike Mitchell.

I apologize that I did not respond to your email. I don’t recall seeing anything in my emails. The best way to reach us is by using the CALL option to reach us.
5.0

Mike showed up on time and was very professional. Very honest.

He scheduled 3 times and never showed up

Description of Work
Plumbing in bathroom

M and M Plumbing did a wonderful job on my house. I now have all brand new plumbing just like a brand new home, even though this house was built in 1928. I highly recommend this company for the job.

Description of Work
All Brand New

Fantastic job everything works as it should now both tubs drain, and no more leaks. Both problems are repaired.

They never called back. We used BVS Plumbing---he was great!!!!

Description of Work
faucet in tub

service was prompt, price was very reasonable and very professional. He gave me a quote before he came to my home and it was exactly that.i highly recommend M n m plumbing!!

Description of Work
my basement pipe was old and was causing my washed to over flow.

We agreed on an hourly rate of $125/hr, with a discount if they worked over 8 hours. Some of the plumbing was covered or hidden in walls, but they initially saw over twenty burst pipes. They told me in advance the types of fittings and repair techniques they could employ. They were courteous and steady workers. Wayne was in charge with a helper, and they were a great team. In the end, it took two long days to fix 44 fittings, replace a pressure regulator, remove and replace a cracked toilet, repair a Delta shower valve, move washer, dryer, refrigerator, counters, and carefully open up several walls. We had set aside $2400 and were certain after two days with lots of expensive materials, it would be over $4000. We were pleasantly surprised when the actual discounted invoice was $1748.20... We can afford a vacation this year after all.

Description of Work
Water lines had become hard frozen in a large heated garage due to the 12 ft overhead door being left wide open in 14 degree weather. It was impossible to assess the damage until they started the repairs. I had earlier received estimates of $4500 and $3500 from other plumbers. This property had actually been remodeled into a party and dining hall with lots of games and activities. There are also three shower rooms, three bathrooms, and a kitchen sink.

This is somebody you can use, i'm satisfied.

Description of Work
They provided plumbing services. They replaced a pin whole leak, and a line.

We are very pleased with the work that was done.

Description of Work
Installation of plumbing and fixtures for renovation of master bath.

Called M&M on July 10 am. Left phone message. As of July 14, no response. We contacted another plumbing service, locally, who fixed the problem with prompt and courteous service.

M&M would not respond to messages or voicemails. I had to find another contractor.

Description of Work
Through Angie's List, I requested a quote on replacing a water heater at my mother's house. M & M provided a ballpark quote of $650-$750. A provided 6 days to choose from to complete the work and gave them several days to work on their schedule. After several messages and a voicemail were ignored, I found another contractor on my own. They completed the work to my mother's satisfaction today. I would not recommend M & M Plumbing.

Perfect! Had to deal with age old cast iron and lead and extension flange.

These guys were great! Their pricing was definitely a factor in hiring them. Mr. Mitchell knows his work. We highly recommend them.

Description of Work
Remove and replace dishwasher and downstairs toilet.

Called the day before on a Sunday and talked to a guy. Got two calls on Monday morning - 1 for an appointment and 1 that they were on their way. 2 guys arrived on Monday morning, went right to work, didn't make a mess, were quiet, and got the job done quickly. Also the guys were careful around the baby and two cats.

Description of Work
The hot water knob in the bathtub would not turn off the hot water.

fixed the leak and is continuing to monitor if more work is required.

Description of Work
identify a leak

Have used this plumbing company for years. Mike is the best! They always show up when they say, do great work, clean up after, price is always what they quote. I would never use a different company.

Mike placed the two toilets in my house, and did an excellent job. He and his crew were punctual and professional. I highly recommend M & M Plumbing. Just recently I had an issue with my hot water heater, and although it turned out not to be a plumbing issue, Mike was able to determine the problem and what the fix should be.

We had five old, rusty, leaky yard hydrants that we needed replaced. The guys came out, looked over the job, gave us a price and we picked a start date. They arrived right on time and worked through the first day replacing four hydrants. The fifth one had to be dug out of the ground and pipe replaced which could not be finished the first day. The guys put us on the schedule for their next opening. Again, they came out on time and completed the work. We will use M&M Plumbing whenever we have a plumbing issue.

He updated a water line to my Samsung Fridge. My house was built in the '40s and the plumber that installed the new refrigerator used a very small copper tube and a piercing valve. That had caused clogs in the line. Everything is working great now.