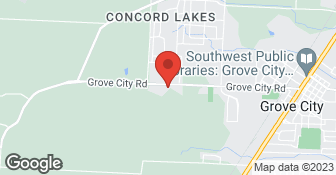 Since 1956, the moving professionals at Aaron Allen Moving have been devoted to our company philosophy: Do the Best Job Possible. This commitment is one of the reasons why families and businesses throughout Central Ohio have relied on us for all their moving needs. When you call Aaron Allen Moving to help you with this important transition in your life, you work with a team that understands how stressful moving can be. Our goal is to make the process as painless and hassle-free as possible. We accept Cash as payment. Free Estimates, Senior Discounts, Military Discounts, Licensed, Bonded, Insure

They did a great job! Very satisfied.

This move was for my mother moving from a house to a condo. My mother is very organized and had boxes labeled with the room there were to go in. Unfortunately, the condo was not move in ready and the boxes had to go into the garage. The boxes were placed haphazardly in the garage rather than keeping the rooms they were to go in together and my mother was less than pleased with that. She had used this company in the past and was happy with their past service, but I was not happy with this experience or the workers. They were on time. They were basically professional, but I felt they could have been more so.

Overall, very poorly. Their packing was a odd mix of very careful work and shear neglect. The workers required constant supervision as they would stop working when I was not looking. My neighbor even commented on his observation of their slack work ethic. At one point I left to drop off some stuff and because I was uncomfortable with the situation I returned, stopped at the end of the block, then watched what was happening. There was no one coming to and from the house. After a while the three movers ambled out slowly, sat down in our chairs that they had left sitting in the yard, and lit up cigarettes. Their original packing job took 9 hours, did not get a large amount of our furniture into the truck, and left a load that was sufficiently poorly secured that I was uncomfortable driving long distances with it. When I called the office about it, to their credit, Joanna (from the office) and their lead packer came and after arguing with me a bit about it the packer in 2 hours single-handedly got all the rest of the furniture in the truck and secured the load very well. After unloading I found that thanks to their careful packing most of our antiques came through in excellent condition. However, they also packed one especially nice antique table with no padding at all and jammed the washing machine up against it causing some damage to the finish. Similar damage was done to another piece that was padded on only 3 sides then jammed up against the side rails on the unpadded side. A cast iron plant stand was broken due to being jammed in between several heavy items and the drawer of a tool cabinet was bent. Sadly, when I called about this damage Joanna agreed it sounded badly done and said she would talk with the lead packer and get back to me. 5 days later I have not heard back from her. Their packing style is interesting in that they make very little use of ropes and tie-downs. They seem to rely solely upon jamming things together so they cannot move. Their lead packer seemed to be the only one who knew how to pack the load. When he left early to attend his daughter's kindergarten graduation the remaining 2 packers seemed at a total loss for how to load the truck and seemed to dither away the remaining 5 hours accomplishing very little.

Description of Work
Packed furniture, boxes, trunks, and misc. in a rented truck.

They were fine. They were on time and their price was good.

Description of Work
I used the services of Aaron Allen Moving about three years ago for moving.

Description of Work
They showed on time and moved all my things carefully and professionally.

The move went great. The two movers picked up our heavy furniture with no problem. We were all moved within three hours. Everything arrived in perfect condition.

Description of Work
Moved all of our big furniture.

From the very pleasant Joanne in the office to the three workers who moved us, this is a great company to work with. It took two trips with their large truck which took the entire day. There was never a time that the workers were not putting out 100%. We used them 10 years age to move us into our old house and their work is still extremely professional.

Description of Work
Local move from Grandview to Powell of entire household.

THE MOVERS DID ARRIVE AS PROMISED AND ALL WENT FAIRLY WELL, UNTIL ONE OF MY PIECES OF FURNITURE WAS DAMAGED. DUE TO CARELESSNESS OF THE CREW, THE GLASS FROM A DOOR ON MY ENTERTAINMENT CENTER BROKE AND HAD TO BE REPAIRED. THE COMPANY DID THIS, BUT IN A MOST UNTIMELY MANNER.

Description of Work
MOVING FROM GRANDVIEW AREA TO POWELL ON JUNE 10, 2002.

We are a locally owned and operated family business service the Central Ohio community with over 30 years of combined experience in the moving industry. We are highly skilled full-service professional movers who take pride in our work. We will provide you with a quality of customer service that is unmatched in the industry and will work with you to exceed all of your transportation and storage needs. Additional DBAs - Columbus Piano Moving, Integrity Moving, LLC.  …

Bonded
Insured
All statements concerning insurance, licenses, and bonds are informational only, and are self-reported. Since insurance, licenses and bonds can expire and can be cancelled, homeowners should always check such information for themselves.To find more licensing information for your state, visit our Find Licensing Requirements page.
General Information
Free Estimates
Yes
Eco-Friendly Accreditations
No
Warranties
No

Aaron Allen Moving is currently rated 4.1 overall out of 5.

No, Aaron Allen Moving does not offer eco-friendly accreditations.

No, Aaron Allen Moving does not offer warranties.