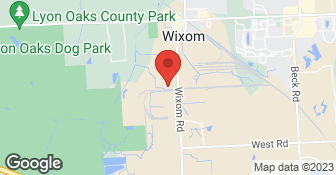 Excellent. Lodi and team are great.

Lodi and his team was here at just after 8:00 this morning and completed the whole house. He and his team did a great job!! I've had this house painted before and this was the best job by far, wish I'd found him sooner!!! On a scale of 1-10 Allstate Painting is an 11.

Lodi was great to work with. Punctual and professional. Went above and beyond my expectations. Would definitely hire again. We had a lot of wood trim that needed replacement and the job was done as promised.

Description of Work
Painting of all the trim on our colonial

They were great. Lodi was patient with me even though I kept changing my mind. They did the work quickly and professionally for a reasonable price.My house needed a lot of work and they took care of it all. I will definitely hire them again for any painting jobs.

Description of Work
Power washing of exterior of house and decks, some wood replacement, painting and staining.

Description of Work
They did an excellent job for a fair price. I would definitely use them again.

They were very professional and the job was completed as agreed upon. I have since hired All State Painting to paint my investment property, and have referred them to family and friends.

Description of Work
Painted the exterior of my home and replaced a few boards.

He did a great job, his price was good and he was nice to work with

They replaced some rotten wood but missed a majority of it. When replacing the wood, they only replaced smaller sections of the full board rather than replacing the full board. They covered a lot of rotten wood with loads of caulk instead of properly removing it, replacing it with dry, primed wood, and caulking around. They also used the wrong color caulk in areas (e.g., used white caulk where prior caulk was brown for the siding). I can only speak for the prep job as I later ended up hiring someone else for the full job (prep plus painting) after disatisfaction with their prep job. I can't comment on their actual painting quality. Lodi was generally good to work with, though. Both days I called, for the original quote, and then to discuss prep problems, he came out the same day. I just wish his guys would have done a better prep job because now I have to pay more for a different contractor to remove the wrong color caulk they put on and replace all the caulked in rotten boards properly.

Description of Work
Powerwashed exterior of house and replaced some rotten wood in preparation for painting of trim.

Somerset Painting and Professional Improvements is an Angies List Super-Service Award-Winning Michigan-based company that specializes in both residential and commercial improvements with over 39 years of experience. Check out our video on our website! Award winning. Additional email - naomi@somersetpainting.com.  …

G.M.C. Painting & Remodeling is a full-service company located in Farmington Hills, Michigan. With experience of more than 35 years, father and son team have provided custom painting and remodeling for residential and commercial areas in Oakland, Macomb and Wayne. We are proud to say that we have provided our customers quality and professionalism. We are fully licensed, bonded and insured by liability and workers comp to make sure you receive the safest and best services possible. Our license number is: 2102205832  …

Along with great customer service we offer - complete interior & exterior painting, cabinet refinishing, staining of all woodwork and staircasings. Drywall repairs, light drywall installation, and pre-finished hardwood floor installations. Exterior wood and siding replacement. (About our company) We are a full service interior and exterior painting company. We offer Financing, FREE estimates, and price matching. The owner is a second generation painter after his grandfather. He have been in the industry for over 26 yrs. Customer satisfaction and quality is our highest priority. He will be the one that you talk to to set up the quote and the one you will meet with when the quote is given. We have a (Quality Control Manager) to insure the highest quality and superior customer satisfaction for every project. He will be in constant contact with you from start to finish. We can set you up with a color consultant to help you pick out your colors from the interior to the exterior. Our company has won the Angie's List super service award every year for over 10yrs. Call us to see why so many have hired our company and continue to use our services. 248-830-4779.  …

How is All State Painting overall rated?

All State Painting is currently rated 4.8 overall out of 5.

What days are All State Painting open?

All State Painting is open:

What payment options does All State Painting provide

All State Painting accepts the following forms of payment: Check

No, All State Painting does not offer eco-friendly accreditations.

Does All State Painting offer a senior discount?

Are warranties offered by All State Painting?

What services does All State Painting offer?

Are there any services All State Painting does not offer?