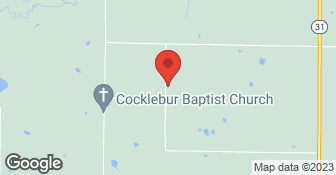 Around 15 years of experience.

They did very nice and good work on that. I thought that he did a good job. He had helpers as needed and who worked for him part time. He is a pretty good carpenter and he can do landscaping. He is pretty quick and is not going to spend a lot of time doing something. He is going to come in and get it done and go on to the next project. You definitely get your money's worth. He is the kind of guy who will tell you upfront what he feels about your idea and try to save you some money. You will have to go with his recommendation and do what you want with it and he will do it. He is a pretty good guy. His helpers are not always as good as he is. He tells them to do something quickly and they do it, and they take shortcuts, and that may not be exactly what he would have done. He is very honest upfront on things and you get your money's worth, although you may not get a whole lot of extras. He is not one of these guys who promise a lot of things and then do not deliver. He delivers on what you agreed to, but don't expect anything extra. He is not going to fit you in and you may not be first on the list. He may give you date but may not be able to make it on that date.

Description of Work
A & E Landscaping helped me put in some planting beds. They used hedging to put in three different planting beds in the backyard and planted some things there. They also built a pergola and put in some concrete paving stones underneath the pergola to create an entry to the house. I already had a metal building that had not been assembled and I had created a foundation for that. They put those together and screwed it to the ground.

Commercial repair services is a company that provides for residential and commercial remodels, repairs, and maintenance services. We also do handyman jobs as well as turnkey remodels or restorations. Decks are one of our specialties as well as Room Addition and Carport/Garage conversions. Get in touch with us today for a free estimate on your project!  …

All Star is a locally owned and operated decorative concrete company with over 31 years of combined experience. We are an authorized CTi dealer, the #1 name in concrete overlay systems. With over 700 dealers in 21 countries, CTi is the industry leader in concrete restoration and beautification. New or old, your concrete can be "made over" to give your home a whole new look! We have many different stencil patterns to choose from as well as cut stone finishes for a fresh new look. Limitless color combinations ensure we can compliment any surrounding. We also offer free estimates that are consumer friendly and interactive so you, the customer, know the exact scope of work being performed at your home or business. Call for your free estimate (501) 454 8222 CTi's systems are a modified acrylic resin combined with portland cement that will meld and become one with your concrete which allows us to achieve a thin layered topcoat making it perfect for any application. Our trained installers can spray coat or trowel this mix to give you virtually any finish or texture you desire. CTi's systems are used for a number of applications such as: Driveways Patios Walkways Interior Flooring Pool Decks Garage Floors In addition, CTi systems are: Freeze/Thaw Resistant Easier to maintain than concrete Twice the normal strength of concrete Salt Resistant Stain Resistant  …

How is A & E Landscaping overall rated?

A & E Landscaping is currently rated 4 overall out of 5.

What days are A & E Landscaping open?

A & E Landscaping is open:

What payment options does A & E Landscaping provide

No, A & E Landscaping does not offer eco-friendly accreditations.

Does A & E Landscaping offer a senior discount?

No, A & E Landscaping does not offer a senior discount.

Are warranties offered by A & E Landscaping?

What services does A & E Landscaping offer?

Are there any services A & E Landscaping does not offer?