How Much Does It Cost to Remove a Fireplace?

The average cost to remove a fireplace is around $7,000. Sure, fireplaces can be warm and cozy, but they're not the right fit for every home. Removing a fireplace from your home is a big task, involving at least a couple of dumpster loads of waste and a week or more of work in your house. However, sometimes it’s necessary, particularly if you want to join rooms or replace a damaged chimney.

What Kind of Fireplace Removal Can I Get on My Budget?

Fireplace removal can be expensive—but you can save on costs by only partially removing your fireplace and chimney.

For $1,000, you can afford to have the chimney stack above the roof removed. This smaller project involves dismantling the portion of the chimney that is outside your house and closing up the hole that leads to your fireplace.

With a budget of $2,500, you can afford a chimney breast removal. This means that you can dismantle the part of your chimney that encases the fireplace to free up space in your home.

If you want to demolish your chimney entirely, costs start at around $4,000. Depending on the size and location of your chimney, however, costs could range up to $10,000.

How Much Does It Cost to Remove a Fireplace Yourself?

We don’t recommend removing a fireplace as a DIY project. Removing load-bearing structures from your home is a serious job, and you want to know what you’re doing every step of the way. If something goes wrong, you could end up damaging the structural integrity of your house, so you should contact a local general contractor to get the job started. 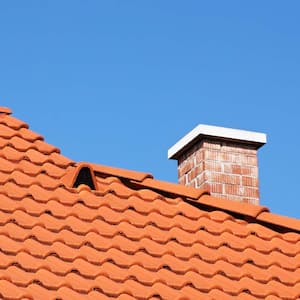 Chimney Anatomy 101: Breaking Down the 12 Different Parts of a Chimney

How Much Does It Cost to Remove a Fireplace by Type of Demolition?

There are several different ways to remove part or all of your fireplace.

A partial demolition involves removing or replacing only part of your fireplace and chimney. Partial demolitions are typically less expensive than full removal, with an average cost of $500 to $2,000.

Full removal is the most expensive fireplace removal option and involves completely removing the structure from your home. A full chimney removal costs between $4,000 and $10,000.

An above-roof removal, also known as a stack removal, refers to removing only the part of the chimney that extends above the roof. This costs an average of $1,000 to $1,600 and is often a good option if your chimney is leaking or damaged.

A below-roof or breast removal involves removing the chimney breast, which encases the fireplace. This typically costs from $1,500 to $2,500. When conducting a below roof removal, the chimney stack is typically left in place.

Flue and Liner Removal and Replacement

If you need to replace sections of your chimney, an average chimney rebuild costs about $1,000 to $3,000. Costs may vary depending on the type and scope of damage to your chimney. 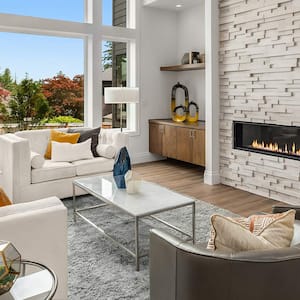 The Pros and Cons of a Ventless Fireplace

What Factors Influence the Cost to Remove a Fireplace?

Several factors influence the cost to remove a fireplace, including whether you choose a full or partial removal, whether the fireplace is damaged, and what materials are used.

If you are removing your fireplace because of existing damage, this may mean that you’ll have to pay to fix related issues. For example, you might need to pay more to remove asbestos or add structural supports.

What material your fireplace and chimney are made out of will also affect the cost. For example, metal chimneys are typically less expensive to remove or replace than chimneys and fireplaces made out of brick.

Should I remove my fireplace?

If you’re thinking about removing your fireplace, you should be aware that you’re losing a potentially valuable feature of your home. A fireplace can add thousands of dollars of value to your house. That said, there are some reasons why you might want to remove a fireplace, including joining two rooms together or removing a damaged or leaky chimney.

Do I need to hire a structural engineer to remove a fireplace?

A good contractor will typically have a local structural engineer of their own to verify that it’s safe to remove your fireplace and wall. If they don’t recommend a structural engineer’s opinion, it’s a good idea to ask for one yourself.

How much does it cost to replace the firebox inside a fireplace?

The cost to replace the firebox inside a fireplace is about $600. You may also want to consider replacing it with a fireplace insert.

Can you remove a fireplace without removing the chimney?

Yes, it’s possible to remove a fireplace but not the chimney. However, you’ll need to install chimney supports to maintain your home's structural integrity.