How Much Does Asbestos Removal Cost?

Asbestos removal is sometimes a necessary headache when remodeling an older home. The carcinogenic material was internationally banned in 1979, but stockpiled materials were still used in homes throughout the 1980s. Unfortunately, because it poses a health hazard, asbestos removal is highly regulated and can be difficult. This comes at a cost.

The average homeowner typically pays between $1,120 and $2,910 for asbestos removal, but whole-house remediation can cost more than $30,000. The good news is that there may be more affordable options like encapsulation, which seals off particles so they can’t become airborne. The type of asbestos, location, and square footage will determine the cost of the project, but the only way to know for sure is to get a quote from a local asbestos removal professional.

How Much Does Asbestos Removal Cost Per Square Foot?

The typical asbestos remediation project costs between $5 and $20 per square foot, but it depends on the location.

Asbestos in Walls and Drywall

You’ll typically pay $10.67 to $13.34 per square foot to remove asbestos from a wall or drywall. In some cases, you’re looking upwards of $20,000 for a 1,500 square foot home, but most of the time, you can encapsulate asbestos instead of totally removing it. Encapsulation, which creates an airtight seal around the asbestos to prevent fibers from releasing into the air, costs $2 to $6 per square foot.

Asbestos in the Roof and Shingles

Roofing is one of the most expensive places to remove asbestos. Prices typically run between $20 to $120 per square foot, plus the cost of installing new roofing. The average roof replacement costs $8,390 up to $22,000.

Asbestos in the Siding

On the high end, removal of asbestos siding can cost up to $150 per square foot, but the typical repair cost is between $700 to $10,000 total. In some states, like New Jersey, removal isn’t required, so homeowners often prefer to repair and encapsulate the siding to keep costs low.

Asbestos in Flooring and Floor Tile

Most homeowners can expect to pay $5 to $15 per square foot to remove asbestos from floor tiles. This requires mechanical removal, but most of the time homeowners only need to encapsulate the asbestos and cover it with a new floor. In this case, floor installation would typically cost between $1,490 to $4,550.

Asbestos in Pipe Insulation and Wraps

Removing asbestos around pipes typically costs $2.50 to $10 per square foot. For wraps, you’re looking at around $2 to $5 per linear foot. The harder to access, the higher the cost.

Removing asbestos in HVAC insulation varies widely. It can cost as little as $800 or as much as $2,500 in total. In some cases, it’s more affordable to replace the unit than bother with remediation, so it’s best to consult a licensed professional.

Like most rooms, the cost of asbestos removal in a basement depends on accessibility. Finished basements can cost 25% more than unfinished basements because they require more setup and demolition.

How Much Does Asbestos Removal Cost Near You?

Because asbestos removal is regulated by state and local governments, the cost varies by region. It will cost more to remove asbestos in areas with more regulations and a higher cost of living. For example, in California, non-friable bulk types of asbestos aren’t classified as hazardous waste, so disposal costs will be less expensive than in New Jersey, where you must take asbestos waste to a designated landfill.

The typical range is as follows:

How Much Does It Cost to Remove Asbestos Yourself?

Most people don’t DIY asbestos removal because of the strict laws regulating demolition, encapsulation, removal, and disposal. A professional will protect you from potential violations, but beyond that, asbestos is carcinogenic and can affect your health. It’s not hard to accidentally inhale asbestos fibers if you’re not using the proper gear correctly—and most people don’t have a HEPA vacuum lying around.

When hiring an asbestos removal contractor, make sure they know your state and local laws and can obtain the required licenses and permits. They should also be familiar with the Occupational Safety and Hazards Administration (OSHA) and Environmental Protection Agency (EPA) standards. OSHA requires those supervising asbestos removal to meet the EPA Asbestos Model Accreditation Plan, even if it’s not required by your state.

Asbestos removal has such a wide range of costs because there’s no one-size-fits-all solution. Some people will only have to remove asbestos around basement pipes, while others will have to replace the entire roof of their home. Either way, setup is usually the largest cost.

You may also want to test for asbestos before and after removal. Before, it will help you assess the overall problem. After, it ensures that no asbestos has snuck into your HVAC system and there are no longer asbestos fibers in your home’s air. An asbestos test costs $250 to $850. A full air quality report costs an average of $400.

Setup, particularly sealing off the area where work is being done, is typically the largest expense. This makes up 60% to 70% of the final bill.

The average homeowner pays asbestos removal businesses $75 to $200 per hour for labor per crew member. The typical two-person team will take about eight hours to complete a project.

Asbestos is usually regarded as hazardous waste, and disposal must follow EPA guidelines. Costs vary from state to state, but it’s typically $10 to $50 per cubic yard and $50 to $100 for the permit.

Since encapsulation saves on demolition and disposal costs, it’s usually 15% to 25% cheaper than removal. This costs $2 to $6 per square foot. Encapsulation quality sealant is generally $115 per gallon.

What Factors Influence the Cost of Asbestos Removal?

The more square footage, the higher the cost to remove and dispose of. This is especially true if you need to seal off large areas.

All asbestos is removed using the same equipment, so the setup and time are similar, but some contractors charge differently for different types. There are three types of commonly used asbestos:

It costs less to remove asbestos from accessible locations. Inaccessible locations may require demolition and extensive sealing. For example, to remove asbestos from a floor pipe spanning three rooms, each room will need to be sealed off and you’ll have to use multiple negative air fans. That’s before demolishing the floor. If a pipe of a similar length is in an exposed basement, you’ll just have to seal off the basement. No demolition required.

How do I know if there’s asbestos in my home?

Homes built before the ’90s may contain asbestos, but the only way to be sure is to have your home tested.

Does a home seller have to disclose asbestos to potential home buyers?

No, but you can ask questions or have the air tested if you’re purchasing a home built before the ’90s. 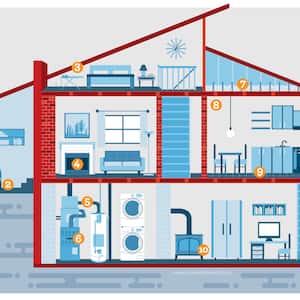 10 Places Asbestos May Be Lurking in Your Home

Asbestos likely remains in millions of homes, especially those built before the 1970s.