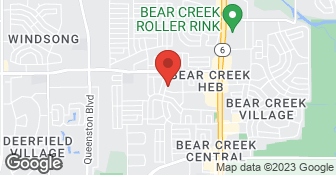 Accept Mastercard, Visa, Amex. Payments are 50% down and 50% upon completion. We pride our selves on a turn key operation with very little sub-contracting...

I contacted the contractor in July for a quote. Mike was very responsive on providing the quote. I scheduled the work and paid a $7000.00 deposit in August. Work was supposed to get started on 9/23/13. I was contacted on 9/22/13 and was informed that he would not be able to start until later in the week. something about one of his workers had to leave town for a funeral. I was then contacted and said that he could start on the following Monday 9/30/13. Mike showed up at 9 am to get keys to the house. He dropped off his trailer and picked up the debris that was in the driveway from the cabinets that I had removed prior to his work to begin. Nothing was done until Wednesday 10/2/13. all that was done was some drywall removal. which is where we discovered drain lines in the walls that were to be removed. I was told that he would have a plumber out to a**** and move the plumbing. nothing has been done to date on the plumbing issue. He had send his electricians out on Friday 10/4/13. all they have done is cut a few holes in the ceiling and run a few wires. I have called and spoken with Mike several times through out this whole time pushing for some answers on when this was going to be completed. He continually told me that I would see some progress. as of today at 11:30 after receiving a text from him on Monday and Tuesday that said they would be there to work on various parts of the project. Not one person has been to the house. also, he was supposed to have mapped out on the floor where the cabinets where going to go so the electrician new where to install the new lighting. it was done, but it was wrong. I actually took out a tape measure and ruler to mark where cabinet placement should be. If I don't see any progress by Thursday, I am going to get a new quote from a different contractor and fire him as soon as I can find a replacement.

Description of Work
Project was to remove some walls, install new beams and columns to support 2nd floor. install cabinets and misc other services

We have the experience and dedication to get the job done right! Specializing in masonry and concrete services; We guarantee your satisfaction, and we won't leave until the job is done right. We pride ourselves on the quality work we provide, while delivering great customer service! Call or click for your FREE estimate today!  …

Insured
All statements concerning insurance, licenses, and bonds are informational only, and are self-reported. Since insurance, licenses and bonds can expire and can be cancelled, homeowners should always check such information for themselves.To find more licensing information for your state, visit our Find Licensing Requirements page.
General Information
Free Estimates
No
Eco-Friendly Accreditations
No
Payment Options
Check, Visa, MasterCard, American Express
Senior Discount
10%
Emergency Service
Yes
Warranties
Ask for details

No job to little or to large for us.

How is J & M Builders and Construction LLC. overall rated?

J & M Builders and Construction LLC. is currently rated 2 overall out of 5.

What days are J & M Builders and Construction LLC. open?

No, J & M Builders and Construction LLC. does not offer free project estimates.

No, J & M Builders and Construction LLC. does not offer eco-friendly accreditations.

No, J & M Builders and Construction LLC. does not offer a senior discount.

Are warranties offered by J & M Builders and Construction LLC.?

No, J & M Builders and Construction LLC. does not offer warranties.

What services does J & M Builders and Construction LLC. offer?

J & M Builders and Construction LLC. offers the following services: No job to little or to large for us.