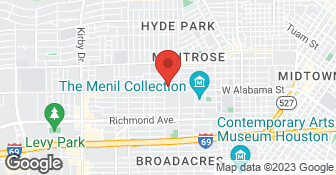 They were good but they had a trouble looking for the concrete so they have found another piece of equipment to put the concrete down. He took care of it and it was good.

Description of Work
Dancon did our concrete patio.

He never paid us for our services. He agrees he owes the money but he says he just doesn't have the money to pay us. The homeowner paid him in full for the job, and he kept all the money. Didn't pay his subcontractor. (ProLectric, LLC) He now won't take our calls, and all of the mail we send him is returned, and his web site has gone down. I just would like to warn people considering using his services that he doesn't pay his subcontractors. This really leaves homeowners open for liens. Be warned.

Description of Work
He hired us to do subcontract electrical work for him at a customers home in League City. Our company did the work and all was well UNTIL...

We got their name through HomeAdvisors.com (used to be called servicemagic.com). They returned our call very quickly after we contacted them and came out to give us a bid promptly. We dealt primarily with Dan Miller during the bidding process and Joey Simpson during the construction. Their bid was not the absolute lowest, but it was among the lowest. We chose them in the end because we liked the way they interacted with us and we also liked their construction methods. For example, they mixed the color right into the concrete, rather than coat the concrete with a layer of color after the concrete has been poured. They connected the rebar of the driveway to the slabs of the house and/or garage. We also liked their selection of concrete stamps for the walkway. The whole job was begun in early December 2012 and completed according to their estimated schedule of about one week. On Day 1, they broke up and removed the old driveway and walkway, but had to stop working in the afternoon because of rain. On Day 2, they pulled out many of the larger roots that had been under the old driveway and walkway, leveled the beds, worked lime into the soil, built the forms, and laid down much of the slate tile on the front porch. On Day 3, it rained so they could not work. On Day 4, they installed the rebar and poured the concrete. We used two kinds of concrete so there were two different truck loads: 1.5 inch aggregate on the driveway and colored pea gravel on the walkway. On Day 5, they finished the slate tiles on the front porch and cleaned up the yard. Despite all their best efforts, we were disappointed to see a number of hairline cracks in the new driveway about 3 weeks after the job was completed. The cracks occurred in 4 of the 8 ‘pads’ that were poured in our driveway. Also, a 2-inch chip came off the colored and stamped walkway at the junction of the walkway and the driveway. We called the contractor, he came out to evaluate the damage, and he quickly assured us that he would do whatever fixes were necessary, even if it meant replacing the pads. He told us the cracks have the appearance of “drying cracks,” i.e. very thin surface cracks, that did not indicate any structural damage. He offered us some options for fixing the cracks and the chipped sidewalk but we decided to wait until the concrete completed curing and the weather warmed up before making any decision. According to the contractor, “drying cracks” can sometimes occur in the hot summer months when the concrete dries too quickly, so it is puzzling to see this happen in a cold, wet month such as December. The 4 pads that have cracks are the ones that had their rebar connected to the slabs of the house and/or garage. Perhaps any movement of the slabs during the drying process might have contributed to the cracks; however, connecting the new driveway to the slabs might, in the long run, help to maintain the structural integrity of the new driveway. Overall, we think the crew was very professional and hard working. They did excellent work and it was apparent that each man took pride in what he was doing. There were a few times during the construction process when we wanted to communicate with the crew about some aspects of the job and neither Joey nor Dan were on-site. The crew did not speak fluent English, yet they were very eager and willing to communicate with us and to understand what we wanted. We were able to successfully communicate our wishes with the crew during those times and felt like they were very cooperative and respectful. The crew also did an excellent job of protecting the house against incidental damage during the construction phase as well as a fairly good clean up job at the end. They also came back and added some topsoil because the new driveway is higher than the surrounding yard on either side. They are very hard workers! We really like the company, despite the problems with cracks. We felt they took every possible precaution, within reason, during the construction process to ensure a top-notch result. The contractor kept open very good lines of communication with us during and after the project, always responding quickly to our phone calls. We feel that the issues with the driveway cracks and the chipped walkway will be resolved in due course. If the cracks do not get any worse, we decided to accept the cracks as a less than perfect cosmetic flaw. However, if it turns out that the cracks do indeed get worse to the point where they become structural problems, we plan to contact the contractor and ask for a remedy. At this point, we don’t think the driveway cracks represent structural problems, but the contractor has reassured us that they will fix any structural problems that might develop, and we feel confident that they will honor their word. It’s a nice driveway, but we can’t help but feel disappointed with the driveway cracks and the walkway chip. That is why we rated the quality of the work only as a and quot;B,and quot; even though we rated the overall experience as an and quot;A.and quot; It's hard to give complete and quot;Aand quot;s when the outcome is less than perfect. We plan to add an update to this review after we examine the driveway crack situation at the end of the hot weather this summer 2013. UPDATE - SEPT 2013 Another crack appeared, so now 5 of the 8 slabs have cracks. The cracks are a tiny bit larger and more noticeable than before, but they are still quite thin. We do not plan to take any action to repair the cracks at this time.

Description of Work
We had our 47-year old driveway and walkway removed and replaced, and we had slate tile added onto our front porch slab. We replaced the driveway with plain, brushed concrete and we replaced the walkway with colored and stamped concrete.

They did a good job on the concrete work. The pee gravel was very poor.

Description of Work
They poured some concrete for us. They also built a wall.

Joey Simpson contacted me within 24 hrs of my contacting him. Came to house to provide an estimate and followed up with detailed estimate of services to be performed by email. Came on time as agreed to and completed the work as agreed. Resulting product looks great.

Description of Work
removed and replaced three sections of driveway.

I had a couple of contractors out to give estimates on my deck. When Joey Simpson came out, he brought with him people to answer my questions regarding my deck project. He knew what I wanted to do, and showed up with experts and employees who would actually be working on my deck. He gave me a quote right away, and I was comfortable with his style of business and cut him a check that day to get started. The work went just as expected and was done quickly. I was very pleased with how the deck turned out.

Description of Work
My deck had a lot of water damage and rotted wood. He fixed my deck, by basically replacing most of it.

Stucco specialist for 15 years doing high quality stucco work across the metro area. Contact me for a free quote.  …

Dancon Custom Contracting is currently rated 4 overall out of 5.

No, Dancon Custom Contracting does not offer eco-friendly accreditations.

No, Dancon Custom Contracting does not offer a senior discount.

No, Dancon Custom Contracting does not offer warranties.