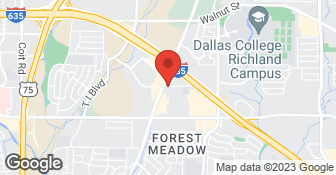 WE ARE AN OWNER OPERATED COMPANY THAT'S BEEN IN BUSINESS FOR OVER 6 YEARS HERE IN THE DFW AREA WE PRIDE OURSELF ON BEING ABLE TO DO A GOOD JOB, WITH OVERALL VALUE IN MIND AND ALSO TO MAKE IT AS AFFORDABLE AS POSSIBLE FOR OUR CLIENTS...

Good communication before and during work. Explained options clearly. Work completed to spec.

Description of Work
Replaced the fixture, under sink PVC, and shut-off valves on the utility sink in my garage.

AIG was very responsive and flexible with time. The work was great and fast. Very reasonable prices and great work. I recommend using AIG for large or small projects.

Could not have gone better. Mike was incredibly professional and was able to coordinate last minute repair job overnight and have done midday the following day. The work itself matched this same level of professionalism. Big thanks to your team. I highly recommend.

It went great, my son is happy and so am I. I would definitely give hom a call for future endeavors.

Description of Work
He put up a basketball goal

Mike Addison said he could install blinds on 6 windows for $150. But then he asked for $300 for supplies and said he'd give me back the difference since it will be less, but he wanted to make sure he had all the right supplies. It ended up being $405 dollars! Also it took him days to do this, said one of my windows was not standard. He also said he would send me an itemized receipt. It's been over 2 weeks now and I've sent 3 texts POLITELY asking for a receipt. No response. He also left the top of the windows without any covers, they are arched windows. I had to go to amazon go buy something to cover the tops of the windows. A google search shows his company AIG Dallas owns many businesses, and doesn't do this full time. COMPLETE RIP OFF, and I suspect other positive reviews are from friends. He also never asked me if I had any questions or was satisfied with the job. I still haven't heard from him, but now I don't want to. AVOID! *The picture shows the top cover I had to buy since he didn't do the job correctly. It's still not on correctly!

Good Personable,professional, and completed task in a timely fashion

Mike and his team arrived on time and finished the job fast.

Description of Work
Cleaning my apartment

Mike was thorough and did a great job. The house looked better than when we began renting it 3 years ago. My only complaint was that I was told trash removal was included but that really just entailed taking the trash out for bulk pick up which our area only offers twice a year so I had to hire another person to take the trash away. As for the cleaning, I would highly recommend A.I.G but plan on another $150 for separate trash removal.

I was pleasantly pleased with the work that was done in my home. They (cleaners) appeared focused on completing a well done deep cleaning. Respectfully, Mrs.Prince

He did great job on the door.. He is very well mannered and professional, the only area I had any issue with was if he was going to run late he did not call to give a heads up. A few minutes is O.K. but after 20 minutes without any contact from him is not.

Description of Work
Move Out Cleaning

Mike Addison did a great job. Very flexible schedule to get the job completed ASAP. More than anything, his customer service was fantastic. It is one thing to be able to repair something but to also be kind, courteous, flexible and communicative is another feat in itself for contractors these days. I will contact Mike for my next repair!

Description of Work
Repair a air vent in the ceiling that had fallen down.

Very well. He was very knowledgeable and quick. He used laser beam replacement. He knew what he was doing. I was very happy with the service. I would use him again. I would recommend him to my brother. He is very responsive. I didn't' have any problems. I had to change the schedule and he was able to accommodate it. Good company to work with.

He did a really good job. Really nice guy. Get's the job done quick and super easy to work with.

Description of Work
put some furniture together

Showed up pretty quick. That"s what I liked the most. Highly recommend. They went beyond.

He was super nice and receptive to things that i suggested, an all around nice. highly recommend.

Description of Work
put furniture together and other handyman tasks

Serving DFW. Angie's Super Service Award for last 8 years. BBB A+ Rating. The Brennan family has been servicing the needs of the Texas homeowner since 1979 and plans on continuing to do so for generations to come. When we say we want to be your home improvement partner for life, we mean it. See website for additional service areas.**Please note we currently are not interior doors or repairs**  …

Maverick Windows sets the standard by which other replacement windows are measured. By providing beauty, performance, durability, and increased energy efficiency, we are your superior DFW window provider. When remodeling your home, Maverick Windows delivers unmatched beauty, installation quality, and energy savings. All with a lifelong warranty and at a price performing cost. Our windows are custom-made to fit your current window openings precisely. They are easy to install and require no additional wall construction. With over 15 years’ experience and a robust North Texas industry presence. Contact us today for your free in-home demo. Stop throwing money out the window on electric bills, and start enjoying the beauty of your new windows today!  …

How is AIG DALLAS overall rated?

AIG DALLAS is currently rated 4.7 overall out of 5.

What days are AIG DALLAS open?

No, AIG DALLAS does not offer eco-friendly accreditations.