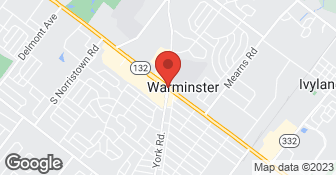 Aaardvark Custer has been in business for 40 plus years. Recently was awarded "Best of Bux-Mont 2012" by the Intelligencer. Additional email - aardvarkcuster@yahoo.com....

Work was complete on time, as outlined, professionally and site was clean as they found it. When there was a small easy issue to be fixed a month later they returned and repaired with no charge and no hassle.

Description of Work
Entire roof was removed and replaced in large 1950s ranch. I had 5 estimates done by all of the local big companies and I picked AC because they wrote a 4 pge proposal detailing all of the options in materials and outlined how the work would get done. I was able to put my roof together ala carte based on budget and what I wanted to do. ALL other proposals were three sentences with no details re materials or process.

Amazing. Team was professional, clean, and took very good overall care of the property while working here. Pictures were provided as work was executed, while we were at work, so there was a clear understanding of condition and work executed. I picked them bc of 5 major roofing companies they were the only company to give me a detailed outline of the work the would do and options ala carte of prices so I could choose what version of work I wanted done.

Initial job was done in Oct 2015. It was very difficult to get them to schedule to repair. After the repair I noticed the water still did not drain properly. I called again in May 2016. It took several calls and two weeks before they just showed up with out making an appointment. I stood on the roof as their repairmen stood on a ladder. The drain was cleared. We both saw the sitting water. He told me the grade is proper even though he saw the standing water. He said I can always just wait until it evaporates. Not exactly the response I expected. He didn't think to check on the possibility that the lip of the gutter may be bowed out causing a bad read on the level or that the lip of the drain might cause the water to not drain properly. I will not be working with them again.

Description of Work
Hired to repair a run of gutter that was not draining and water would spill over the side of the gutter.

We first used Aardvark Custer II a few years back for our roof and siding, we had some small issues such as nails driven through internal walls but the guys they had at the time were friendly enough. We later come to find out that they had covered over our drier vent with new roofing, something we confirmed with their own work photos given to us, by them. We have had to lay out further expense to get that sorted, not by them I hasten to add. We also used Aardvark for some internal building projects, they say they are general contractors. They were given the contract to remodel our guest bathroom which included ripping out an old shower, rerouting a radiator and fitting new drainage for a new shower. They got their guy going on it but after he left the company on bad terms we found out via our tiler that the drainage was sub-par, with drainage going into our sewage stack which would have resulted in raw sewage backing up into the shower tray. The pipes went from large to small, almost guaranteeing this. During the project, the new shower drain was blocked with an old towel (presumably to stop sewage smell) and every time we used our washing machine (also using a line that Aardvark relocated for us) small amounts would leak through the ceiling, water marks are now very apparent after some time. We called them, they said they'd send their plumbers round who have since corrected the work. However they are not Aardvarks plumbers but sub-contractors who have not yet been paid for this corrective work. The plumbers also removed sub-par radiator/plumbing joins from 'shark bites' to correctly soldered joins. The previous guy cut through joists to lay pipes and installed a base board heater although the plumber since told us that this type of radiator will not work with our current heating system so had to be replaced. Aardvarks 'new guy' first showed up as his plumber, turns out he worked for Aardvark and who has also now left after being unpaid, who asked me for more money to pay him. We called and complained obviously many times but when we finally said just leave and don't come back, they have gone quiet. We stupidly paid in full and they did less than half the promised work. They have a quick turn around in staff, their long timers have walked and they over-promise and give very little customer service when something goes wrong. I have heard so many excuses including how the original worker ripped them off and did our work incorrectly in spite but I know for a fact that he wasn't a plumber, just a handy man who 'gives things a go'. There was no one else on the job at any time so no over-seeing or project management. I'd love for them to come back to this review and argue any of these issues but all of these points can be proven, and they know it. They have made no effort to make this better and things could have gone very wrong had we not spotted the covered drier vent. Since the drier outlet has been removed the amount of lint that has built up in our small attic space is significant, this could have caused a fire. I am disgusted with their workmanship or lack thereof. Happy to share photos of evidence.

We were very pleased with their work.

Description of Work
They repaired several areas of the roof.

They did the good job according to somebody else who was on the roof cleaning my gutters. I had used them many years ago.

Disciple Masonry specializes in masonry repairs and new masonry installations. Our customers are everything to us. We take the time to understand you and what you want, and make it our mission to help you get it. Not sure if we can help? Give us a call now to find out!  …

BrightSide is a Fully Insured experienced and family-friendly interior and exterior cleaning services company. We work with both Residential Window Cleaning Philadelphia PA and Commercial Window Cleaning Philadelphia PA clients. BrightSide offers a variety of services including Window, Screen, Chandelier, and Gutter cleaning, as well as Pressure Washing. We're also proud to offer a variety of other services for hard to reach places.  …

Insured
All statements concerning insurance, licenses, and bonds are informational only, and are self-reported. Since insurance, licenses and bonds can expire and can be cancelled, homeowners should always check such information for themselves.To find more licensing information for your state, visit our Find Licensing Requirements page.
General Information
Free Estimates
Yes
Eco-Friendly Accreditations
No
Payment Options
Check, Visa, MasterCard, Discover
Senior Discount
No
Warranties
Yes

Aardvark Custer II Inc is currently rated 3.7 overall out of 5.

No, Aardvark Custer II Inc does not offer eco-friendly accreditations.

No, Aardvark Custer II Inc does not offer a senior discount.