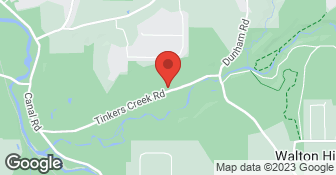 Owner was nice to start with but became condescending & irate. I had 2 areas that I needed a small retaining wall by my front planting bed rebuilt. I also wanted lawn edging along the side of my house. They had to remove 5" plastic edging that had 'heaved' and separated. The owner came out. He was pleasant & knowledgable. I already had the bricks. When the guys came to put the walls up, they had to put in a stone base & rebuild the bricks. I grilled out a nice lunch (including the owner who had just shown up). Over 2 days, they finished the brick areas. They removed the old plastic landscape edging & put in most of the 8" steel metal edging. The edging was only in the ground 2-3", instead of the 5" I wanted in the ground. I wanted 3" above the ground to hold back the river rock stone from getting in the grass. I made sure to let the owner know both days I wasn't happy with the edging height and that it needed to go deeper in the ground. The owner showed up at the end of the 2nd day (Mon.) & insisted I pay for the 'full job' that day - that they would be there in 2 days to 'finish the job'. (I ran short of edging & it would take 2 days to get more.) Against my better judgement, I paid for the full job. They came back in 2 days (Wed.) to add the last couple pieces of edging, but didn't get it in any deeper. Thurs. I contacted the owner. He was very firm with me and insisted that I had to wait until the end of Nov. or Dec. before the ground would be soft enough to get it further in the ground. We had an inch of rain the next day. I had no problem digging 5-6" in the ground, so Sat. a.m. I called him back & said I wasn't happy waiting that long - that it was supposed to be finished now, not in 4-5 months. He got very irate and starting yelling at me over the phone. I explained I got 1" of rain the prior day & I had no problem getting the shovel 5" in the ground. He told me I didn't know what I was talking about - that there's no way I (a woman) could do that because the ground was like concrete. He then proceeded to tell me "you're an 'older woman' and there's no way you could get a shovel 5" in the ground." Seriously? That made me furious! I responded "Do not presume to tell me what I am capable of doing! You have no idea how strong and capable I am!" He continued yelling and talking over me. He refused to give me any money back saying I have to wait 4-5 months, with no assurance they would come back. I told him that I was would then put a stop payment on the check. He continued yelling and said 'do whatever you want!'. I said that's exactly what I was going to do and hung up. 10 min. later he called me back. He spoke in a calm voice and said I should be getting more rain on Sun. and he'd come back on Mon. Sure enough, he showed up with one of the workers Mon. a.m. They were there less than an hour. He sent a text that it was "easy getting it in the ground". The 2 workers who laid the bricks were very nice, hard workers & did a good job. If you do hire them, do NOT pay in full until the work is completely done. Women, beware.

He is pokey in getting to us, but he does a really good job. I would highly recommend him. He is really nice guy.

Description of Work
He has done landscaping and installed a sprinkler system for me in the house.

He gave me a rough estimate on the phone, then he came over and told me it would be a little more than his rough quote. He was supposed to stop by at the end of September but he didn't. He did say if I didn't hear from him then I should call him, but I've been busy. He must be a busy guy, he seems pleasant enough but he just hasn't followed up yet. I did a lot of research online for trees and his prices seemed very reasonable considering he would have actually done all the work. In our area I thought it was pretty competitive. He did tell me that if I didn't hear from him by the end of September then I should give him a call so I need to call him. He seems to know his stuff and the best time to plant trees.

Description of Work
Valley View Landscape gave me a quote for planting a tree.

I didn?t use them, but it wasn?t because I had anything against them. I only had a phone conversation with them, but it seemed like they knew what they were doing.

Description of Work
I contacted Valley View Landscape to get an estimate to lay down mulch.

I called and left a message for Mark - he called me back within an hour and arranged to view my yard the next day. He arrived right on time, spent a good amount of time discussing what we wanted and his suggestions and gave me a very reasonalby priced estimate right on the spot. While we eventually chose another contractor, Valley View was a close runner-up and I was impressed and pleased with Mark's responsiveness and punctuality (and prices)!

Description of Work
Mark Hocevar came to our home to provide an estimate for landscape services.

Mark offered excellent suggestions to replace older overgrown plants with new plants that are deer resistant and fit in well with plants that we wanted to save. He was courteous, on-time and very easy to work with. He listened to my concerns and offered suggestions that fit in very well.

The owner, Mark Hocevar, has a horticulture degree from Ohio State. He is very knowledgeable and recommended plants that did well in our yard. All of the plants he put in thrived along with the lawn. Mark is easy to deal with. He is always punctual, reliable, and hardworking. They did a wonderful job of taking apart, rebuilding and securing a retaining wall that was falling over.

Description of Work
I have used Valley View Landscaping several times. They have installed our lawn, rebuilt and secured a retaining wall around our patio area, installed various shrubbery and plants, and mulched the yard.

We can take care of all your lawn Irrigation needs. Call today!  …

We specialize in soft washing and pressure washing for your home and business. House washing, roof cleaning, concrete cleaning and concrete ceiling are our specialties. We are a veteran owned company and we are professionally trained, certified and insured for your protection. With our “best-in-industry” products guarantee. You will be satisfied with our concrete sealer‘s. Powergreen is also a professional Christmas Lighting company, parterning with www.Wehangchristmaslights.com from Nov 1 through Feb 1. Design, install, maintenance, removal and storage is what we cover. Its all included.  …

VALLEY VIEW LANDSCAPE is currently rated 4.3 overall out of 5.

No, VALLEY VIEW LANDSCAPE does not offer eco-friendly accreditations.