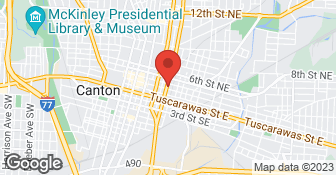 Our employees are uniformed and clean cut. All employees are full time and professional. We offer a large range of services sure to fit almost any needs....

I just want to give Angie's List users a heads-up about this company. I needed a piano moved. The price was a bit higher than other quotes, but they had been used in the past by another person I knew; however, this person was unaware that the company had been acquired by a storage company in December, 2018. When I checked the Akron/Canton BBB, I saw that there was a complaint from Dec 2018 about damage done, which was never satisfied, so I am posting a grade in accordance with BBB's and looking elsewhere for a dependable mover.

The 3 movers worked hard, were very pleasant and very helpful

Jason, Ricardo and Adam worked all day moving us. They were punctual, professional and respectful. They were wonderful to work with. Jason made sure that they all worked safely and was a great lead

Great experience - they hustled at all times and took great care to protect the furniture.

Crew of 3 arrived on-time. They wrapped piano, moved it, and unloaded it at the new location. No problems encountered. This provider is a general moving company and not specifically into piano moving. That was fine for my needs as this was not an overly valuable piano.

Description of Work
Moved an upright piano from one home to another home.

The woman I spoke with would make no commitments and said she would have to talk to her boss first, and they would get back to me. No one ever called back. I guess they weren't interested in a and quot;smalland quot; job.

Description of Work
I called looking for movers who could come out to my house & move furniture from a moving pod into my new house.

The young men showed up at promised. I had done a lot of the advance work as I move often and have worked with moving companies many times before. Mirrors were off dressers, beds taken apart, etc. Kenny, Adrion and Chad worked very quickly, communicated well, and were extremely careful with my furniture and artwork. I was concerned that not all of my furniture would fit in the storage unit, especially since I had already taken boxes to it. After looking over what was to go and asking the size of the unit they told me I would have no problems - I didn't. I can't say enough good things about those three young men. They were careful pulling into the driveway, laid runners through the house to protect the floors, padded the furniture well, etc. I watched them every step of the way, not because I didn't trust them but because I would have helped if my help was needed. Other than pushing the elevator button at IStorage to get to the second floor - they didn't need my help. Cash, check or credit card with a 3% upcharge for using credit. They took my out of state check. Thanks so much. I can sleep well now. They were the best crew I've ever used.

Description of Work
I had asked for referrals from people I work with as well as owners of the antique and furniture consignment stores I frequent. Abbot's name came up several times so I called. Spoke with Jeff. I emailed him a detailed list of the items I wanted moved from my house to the storage unit I had rented at IStorage in Canton - they are excellent too. He guessed 6 hours and gave me a discount because I was also renting a space at IStorage.

They knew how to take my baby grand piano apart. Everything was moved successfully without breaking anything. They came when I called them. I would use them again in the future.

Description of Work
I used Abbot Moving to move my baby grand piano.

Get It Outta Here Hauling

Get It Outta Here Hauling has proudly served the Northeastern Ohio area for the past 11 years. We specialize in residential interior and exterior debris removal of all sorts! Our mantra is...We haul ANYthing, from ANYwhere, on ANY day! Honest laborers, hard work, and affordable pricing is the sustaining strength of our business. Establishing long-term relationships with our customers is our most precious value! Our greatest ability is avail-ability! So look no further, we invite you to contact Get It Outta Here Hauling to receive all of what you are searching for to accommodate your every hauling need!  …

PLEASE CALL (888) 998-5865 TO SCHEDULE YOUR SERVICE. We specialize in junk removal. We are a Cleveland owned and operated company that specializes in the removal of junk, rubbish, and trash from homes, apartments, warehouses, businesses, and government properties. We remove old furniture, construction waste, yard waste, old appliances, rubbish, and just about any other thing you might have that is not hazardous. We will remove as little as one item to multiple truck loads of items. In addition to junk hauling we also do light demolition. We can remove such things as decks, fences, hot tubs, and small sheds. Relax, we do all the loading, lifting, bagging and cleaning. You just have to point out the junk and then watch us do the work. When we are done, we even sweep up! We ensure your satisfaction before leaving your premises. We're helping the environment too. We do our part for the environment by donating and recycling more than 50% of all items collected. That means less junk is going to the landfill! The Three easy steps to junk, trash and rubbish removal Ohio junk Force makes it easy to get rid of anything you have including old appliances, electronics or other household items. We remove almost anything with a few exceptions (hazardous waste). Step One: Call us today for a free quote: 1-888-998-JUNK (5865), or contact us online (www.OhioJunkForce.com). We will give you a free, up-front, no obligation, guaranteed price quote. Step Two: We lift, load, sweat, and clean-up while you relax. Step Three: We ensure your complete satisfaction before leaving! Why wait, call us and live junk free today!  …

We are a Waste Management Dumpster Company located in Rootstown, OH. Serving surrounding areas of Portage, Summit, Mahoning, and Stark Counties. We offer 7 day rentals. Call us at 330-842-9059.  …

Bonded
Insured
All statements concerning insurance, licenses, and bonds are informational only, and are self-reported. Since insurance, licenses and bonds can expire and can be cancelled, homeowners should always check such information for themselves.To find more licensing information for your state, visit our Find Licensing Requirements page.
General Information
Free Estimates
Yes
Eco-Friendly Accreditations
No
Payment Options
Visa, MasterCard, American Express, Discover, Check
Warranties
No

Frequently Asked Questions & Answers about All About Moving

How is All About Moving overall rated?

All About Moving is currently rated 4.8 overall out of 5.

What days are All About Moving open?

All About Moving is open:

What payment options does All About Moving provide

Does All About Moving offer free estimates?

Does All About Moving offer eco-friendly accreditations?

No, All About Moving does not offer eco-friendly accreditations.

Are warranties offered by All About Moving?

No, All About Moving does not offer warranties.

What services does All About Moving offer?

Are there any services All About Moving does not offer?