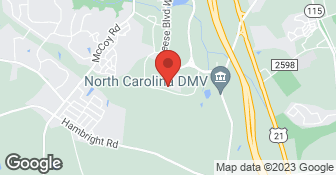 Not performed - Contacted them once through Angie's List (July 13th), but never received a response. Because of their above average rating, and because my neighbor had work done by this company, I thought I'd give them a second chance, as I know messages can slip through the cracks and be over-looked sometimes. I contacted them a second time months later through Angie's List (Sep. 10th) and still (nearly a month later as of this writing) have never heard back from them. I went with a competitor to responded to my first message within 24 hours. If this business wants the referrals and connections that come with A.L., then they should be responsive to their messages through the referral service.

I have a depressed area in my lawn near the house (springs in my area) where the crack is occurring. Mike said this area should be filled in. He said to keep an eye on the crack but only thinks it is the ground expanding and shrinking. If it gets worse with time then he will come back out and decide how to proceed. He explained the difference between vertical and horizontal cracks which was very educational. I am not having any work done at this time but would highly recommend Ram Jack because of their honesty and professionalism and there was no charge for the consultation.

Description of Work
Had crack in brick foundation.

They came out and put 8 new foundation supporters under my house. Everything went smoothly and efficiently. They are great at what they do.

Description of Work
Helped support the foundation of my house,

Description of Work
My project was very complicated and the company provided me with the names of other service providers to assist with the whole project. Their recommendations were spot on and excellent to work with. This project was no "easy fix" and Ram Jack did a great job.

NO ONE EVER CALLED OR EVEN LEFT ME A MESSAGE ON ANGIE'S LIST. I GUESS THEY PICK ONLY THE JOBS THEY FEEL LIKE DOING. :(

Description of Work
I sent them a message on 3/27/14 with a detailed description of the problem and ask them to contact me to set up an appointment.

Prompt service. Arrived at the designated time and worked the entire time they were here except for a brief lunch break. Did less damage to shrubbery than I anticipated. I was very impressed with how quickly they could dig those holes and how they managed to work in such a confined space. Also, my sagging floor is much improved. I will definitely call on them again if I have any future issues.

Description of Work
Installed 5 helical piers to support the foundation and 1 interior masonry pier/drop girder to support a sagging floor.

Prepurchase inspection of home with long horizontal crack in cinder block foundation. Had three folks out looking at it. Ram Jack could have told me anything but said it was only a 1 on a scale of 1-10, i.e. it wasn't bad, and didn't recommend high dollar helical piers, just some carbon fiber strip reinforcement of the wall and regrading of the exterior dirt/landscaping and cleaning of drains. We didn't buy the house but I was impressed that he didn't try and upsell me.

I was pleased with them. They were here on time and as they got to inspection and everything, I needed not only what they could provide but also some small masonry repair around the house, so they connected me with somebody who could do that. He was good to work with; came, did what he said he was going to do, and everything just went smoothly.

Description of Work
I used Ram Jack to do some foundation pour work.

After the vendor did not show up on the day indicated, I attempted to contact them the following week and again got only an answering machine. Left messages but received no response. Now I receive an estimate in the mail that indicates a price (3x every other estimate I have seen) when they have never even done me the courtesy of actually meting with me so that I can show them what it is that I am trying to have fixed. A thoroughly unprofessional organization.

Description of Work
After several attempts to contact this vendor for a foundation repair estimate they finally agreed to meet me on the afternoon of the day in question having produced several excuses as to why the were not answering their phone or returning calls. As far as I could see never showed up.

JAMES AND DONNA A.

Called them for examination and quotation. They arrived when they said they would and conducted their survey. A quotation came as promised. I contracted with them to do the job and once again they were there at the appointment time and finished the job in less time than was estimated. A pleasant experience for an unpleasant task.

Description of Work
Cracks in exterior brick determined a sinking foundation. They raised the foundation and installed piers for support

I called Ram Jack for an initial estimate and the roofer to line them both up for ASAP work. Since at the time we were in a drought, I wasn't to worried. They came out estimated everything and said it would be 4-6 weeks before they could start. Things go worse. Got so bad the flashing on the roof was being lifted. Wouldn't you know it started to rain off and on. The gap was so big that you could see light from one side to the other. They came out the following week and took a few hours to dig deep in 2 spots on the chimney. The original estimate was $2,700 but since they didn't hit the bedrock yet, they had to go deeper. That was an extra $80. The piers were installed. One of the workers came inside while they jacked up the chimney to make sure everything was good. There were a few minutes of horrid sounds and everything was at peace. Chimney sits firmly in place now. I have a life of structure warranty on the work.

Description of Work
I have a 2 story house with a 2 story chimney. It's fairly thick all the way up. So it tends to be top heavy as well. I started to notice slight changes where the chimney was leaning away from the house over years. When I had siding put up, the contractor said to keep an eye out just in case it got worse. But for the time being they would insert a couple of planks of wood in that area to close the gaps. The drought got worse in Charlotte and the chimney kept moving further away.

They exceeded my expectations.

Description of Work
They repaired the foundation due to a water leak.

They were on time, professional, knowledgeable. They got the job done fast. They were here at eight in the morning and were gone by about ten. They gave me an estimate and stuck to it.

Description of Work
They dug through the foundation and drilled down to solid ground and put two jacks under the chimney, lifted it, and covered it.

Description of Work
This was the second time I called them. They promised they would return my call. THEY NEVER DID!!!

THEY LISTENED TO THE ENGINEER WE HIRED. THEY FOLLOWED THROUGH WITH WHAT THEY PROMISED. THEY GIVE YOU A WARRANTY THAT IS TRANSFERABLE. THEY FINISHED THE JOB SOONER THAN PLANNED. THEY DID KILL SOME TREES, BUT THAT IS NOW OUR RESPONSIBILITY.

Description of Work
THEY LEVELED OUR HOUSE, AS IT WAS STARTING TO SINK.

Description of Work
THEY LIFTED MY HOME AND FIXED THE FOUNDATION.

We are a small owner-operated business specializing in residential and commercial concrete. We provide quality work at a great price with 18 years experience. We offer free estimates as well!  …

Dry Pro Foundation and Crawlspace Specialists, founded in 1999, is a subsidiary of Groundworks, a family of companies that offers superior, proven solutions for your foundation repair, structural repair, crawl space encapsulation, dehumidification, and concrete leveling needs. They are a full-service company specializing in residential and commercial foundation repair, waterproofing and concrete repair solutions in the greater Charlotte, North Carolina area and parts of South Carolina. Dry Pro is a recognized accredited member of the Better Business Bureau and devotes its years of experience, industry knowledge and specialized training to help customers protect their homes or commercial buildings from water damage, concrete sinking, and foundation failure.  …

How is RAM JACK OF CHARLOTTE overall rated?

RAM JACK OF CHARLOTTE is currently rated 4.7 overall out of 5.

No, RAM JACK OF CHARLOTTE does not offer eco-friendly accreditations.