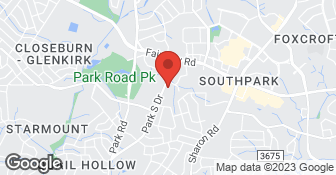 As a professional wood flooring company in Charlotte we handle all aspects of hardwood and engineered floors. We provide personal attention to details and only high quality workmanship. In addition to our quality wood floor installations, we provide wood floor sanding and refinishing. Queen City Hardwoods has the experience and expertise to get the job done right the first time. For a classic, artistic, contemporary or historic style of wood floors, call us first!...

The team at Queen City Hardwoods is responsive, knowledgeable and did quality work for us. They're competitive and earned our trust. We recommend them to others and would use them again in the future.

Josh & his employees did a stellar job refinishing and sealing our floor. The finish provided protection but didn’t obscure—in fact, highlighted—the beauty of the wood. After the work was done, we had a short punch list, as is the case with most jobs of this size, and Josh was extremely responsive: He personally took care of a few items and arranged for his guys to resolve the other matters. The follow-up items were knocked out within 48 hours. Very professional and skilled. We highly recommend Josh and QCH.

Description of Work
We needed our existing floors refinished and the water-based seal reapplied.

I was in the market for some new hardwood floors while doing some upgrades in my house and came across Queen City hardwoods. Josh came out and gave me a quote and explained everything very thoroughly. He obviously knows what he is talking about and made me feel very confident with my decision to hire him. The floors he installed were beautiful and I couldn't believe they weren't more expensive! He followed up with me to ensure the job was completed to my satisfaction and ensured I knew how to care for the floors so they would last as long as possible. I would recommend josh and Queen City hardwoods to anyone who needs new hardwood flooring installed or even refinishing. It was worth every penny!

Description of Work
Queen City Hardwoods removed old carpet and installed hardwoods in my living room and foyer. They completed the work ahead of schedule,on budget, checked my satisfaction and delivered a thank you basket when the work was completed. There was one little area they had a question on since I have weird stairs that go down into a sunken living room. I gave direction on what I wanted and it was complete literally in minutes! I would recommend them and will use this company again for any additional flooring needs. Almost a year later with kids, dogs, cats and a well-lived-in home and they still look beautiful!

Josh, the owner, was great at first. He does knows the business and I trusted him to do what was right. The hardwood repair went well, but the refinishing was a nightmare. He asked me to leave a door open as a reference for the refinishing. I arrived on Sunday afternoon to the floor being stained correctly but an incorrect gloss. I called to let Josh know that my floor looked milky or matte, and my bedrooms were semi to high gloss. His response was that it wouldn't be perfect and my expectations for such without refinishing all of my floors were too high. He hadn't done an inspection of my floors but we were arguing about quality. I could say that this was all our conversation was, but it came as more of a rebuke of his professionalism and lack of quality assurance. We did work it out after me reminding him final payment comes when the full contract was satisfied. He apologized and promised to fix the issue promptly. At that point he had the re-finisher in by Monday night. The refinisher At the end I was satisfied, but I felt indifferent about having to prove that the refinishing didn't replicate the original fully. The fix was a buff and a fourth coat of a high gloss something to bring back the luster (his term). After this was dry, I came home on Tuesday morning to find that the re-finisher had left a spot in my floor undone as though he painted himself in a corner. I sent Josh a video this time, and he replied and had the re-finisher back out that afternoon. Josh did not finish the project in the timeline he provided but it was finished within in his contracted time (6 days). This meant I would have to spend an extra night in the hotel after the first refinishing, which Josh offered to pay after a lengthy conversation. All in all, the refinishing took two extra days, but Josh committed to finishing which I am told is rare. Punctuality: Josh would say his crew would be there in the morning but they would be there in the afternoon. This didn't affect their completion time but did affect their turnaround time for refinishing the refinishing. I did want them to work on a smaller project in my house but I'd rather not have the headache of being talked to like I was your brother getting free work done when in fact I was paying for a service. From our conversation, I could tell he loved his crew and his job but standing by your work without looking at the finished product swayed me from future business. Summary: Repair was awesome; Refinishing initially was mediocre, but it was fixed; professionalism for a passionate owner was below standard but he did come around; crew members were great but late. This was updated from original as I wanted to be a little more objective. Initially, I was shocked by professionalism of the owner, but the work done was good. I can tell you that I can't enjoy my floors fully because of the experience, and third times a charm doesn't bode well with me. I can't say I was totally satisfied or more relieved that it was over.

As a business owner my goal is to treat every homeowner the way that I would want to be treated. So for me that means, speaking respectfully, communicating, and following through with my commitments. We did have a little trouble with floor and had to come back twice until we got it to his satisfaction. Part of my commitment in this industry is to leave no job until the homeowner is completely satisfied with our work. Kevin didn't have to wait any extended period of time. As soon as I realized the floors were not to his satisfaction, we came back to his house to repair the floor that very same day. He did need to stay out of the house for another night which was unforeseen. To compensate Kevin for this inconvenience I immediately offered to pay for a hotel room and profusely apologized for the delay. states in his message that I addressed him more as if he were my brother and not a homeowner I was doing business with. As I mentioned earlier, I only treat homeowners the way I would want to be treated. This Is the only time I have ever had a communicative complaint. I spoke to him, if anything, maybe a little bit too friendly, which he misread as unprofessional. I do respect point of view and do not take his criticism lightly. It is of utmost importance that the customer is completely satisfied before I mark the job complete. In the end, was satisfied with our work and the floors were immaculate.
5.0

Description of Work
Installed hardwoods in Master/1st floor. Finished on site. Matched color to other hardwoods throughout 1st floor of house.

I looked at 3 other companies who seemed qualified but their quotes were much higher and I didnt have the trust and confidence that I had with Josh at Queen City Hardwoods. I could tell that my job and home would be their priority and they were very communicative of evbery step in the process. My floors look beautiful. They willingly came back to finish up a few spots where stain did not take as well and overall did a fantastic job. They also came in slightly under budget and finished the job by delivering a basket of wine and floor cleaner. Best home improvement I have done in a long time. Completely changed and refreshed look of the whole house.

Since 1999, Zack Hardwood Flooring has provided full service hardwood flooring to Charlotte, NC and the surrounding areas. We are a local business born right here in Charlotte. Our client`s needs are the top priority for us, so we are flexible, available and present; we spend quality time with our customers in order to answer all questions, address any concerns, and help develop and execute customized hardwood flooring needs. Whether installing new wood floors or refinishing your existing hardwoods, Zack Hardwood Flooring will provide you with quality professional service throughout your entire project. Customize your hardwood floors with information we can offer you about different kinds of wood, cuts, stains, and designs. Choose from our superior quality selections of both exotic and domestic wood flooring. Please take some time to review this website regarding our services, products and our company. We are ready and able to set an appointment with you to further discuss pricing and any other questions you may have. Please note that we are a full service hardwood flooring refinish company and do not offer small repair services. Thank you for your understanding. We look forward to serving your flooring needs in the near future.  …

Queen City Hardwoods offers expert wood flooring services such as wood & laminate floor installation, hardwood floor sanding, staining & refinishing, restoration and repairs of the existing wood floors in Charlotte, NC at affordable rates for residential and commercial properties. As a professional wood flooring company, we handle all aspects of laminate, hardwood and engineered floor. We also have affordable rates, guarantee on all work and free estimates.

Queen City Hardwoods is currently rated 4.7 overall out of 5.

No, Queen City Hardwoods does not offer a senior discount.

Are there any services Queen City Hardwoods does not offer?