With Angi since February 2014 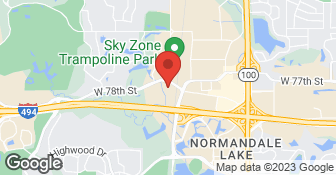 McGee Restoration Group is a full-service home interior and exterior restoration firm. A group of high-end sub-contractors, we are authorities in working with insurance companies to help homeowners restore their properties and protect their investment. Our seasoned professionals have more than 75 years of experience, and have overseen more than $20 million in completed projects. We understand the anxiety that can accompany a home repair project, and the importance of communication and managing our clients' expectations. We are committed to delivering a hassle free, streamlined process to every client, every time. DBA- McGee Restoration Group, LLC

We had some roofing issues and chose Ashton McGee to work with us re: an insurance claim that we filed with our insurance company. Mike Phillips from Ashton McGee was our field representative. On Tuesday, April 9, the claim adjuster denied our claim as he indicated there wasn't sufficient hail damage from an August, 2018 storm. On that same day, as the adjuster left, I asked Mike to prepare a quote to have our roof replaced. He took some photos and indicated he would work up a quote and email it to me in a few days. The following Monday, April 15, Mike called and indicated he should have an estimate for us by the end of the week. On Friday, April 19, he left a voicemail message asking that I return his call. I was out of town, but my wife returned his call promptly, got his voicemail, indicated I was out of town, and asked that he return her call. Today is Thursday, April 25, and we still haven't heard from Mike. Obviously they have no interest in the job. I don't know if it's because they only work with insurance claims or what the explanation is, but Mike needs to work on his communication skills! Not a good representative of Ashton McGee!

Very punctual, roof on in 1 day gutters the next day. Very clean, respectful.

We are very satisfied. The work was high quality, and Ashton was very responsive to our requirements and handled contingencies in a very professional manner. Extremely pleasant to deal with, and trustworthy. Ashton is also very knowledgable in dealing with insurance companies, and helped us to get a fair settlement. He made sure we were satisfied after the work was done. Our property was left clean and orderly.

Description of Work
Replaced roofing, siding, and repaired windows due to hail damage.

Ashton (Gen. Contractor) was here every step of the way. Had a huge storm and he was here with appraisal from the start to finish. kept job on the move and was very helpful.

With years of professional experience, we are extremely passionate about the work and services we provide!. We offer "FREE ESTIMATES" and you can depend on us to provide a high quality service at a fair and honest price! We understand that the future of our business depends upon our reputation and that is why customer service is by far our highest priority. If you are looking for a professional you can trust, please contact us today to schedule a no-obligation, evaluation of your garage door(s). We look forward to servicing you!  …

Scherer Window and Door Consultants is a Marvin Authorized Installing Retailer specializing in the replacement of residential windows throughout the metro area. We are a division of Scherer Bros. Lumber company, a family-owned business since 1930. We focus on the sale and installation of all Marvin product lines: Marvin Signature, Elevate and Infinity from Marvin. Infinity from Marvin features low-maintenance fiberglass and is known for it's EverWood interior that reflects the beauty of wood, can be stained to match existing woodwork, yet will not rot or mold like wood can! We also sell and install Thermatru fiberglass doors to complement your window projects. We are the leader in promoting best practices in window installation. Our sales consultants are extremely knowledgeable regarding replacement windows and doors, for both insert and full replacement projects. Their focus is on determining priorities and retrofitting windows to blend in with existing architectural details. We also specialize in enlarging openings and creating new openings. Our installation crews are craftsmen, factory-trained by Marvin. Their attention to detail and on-site job cleanliness results in a highly satisfactory project experience. We offer competitive pricing and convenient EnerBank financing. We focus on solutions to fit your priorities and budget and work with all sizes of projects throughout the metro area. Our showroom is located in Hopkins . DBA: Scherer Brothers Lumber Co.  …