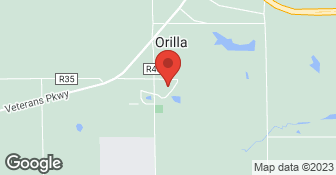 ReadyClean provides professional exterior cleaning services to both residential and commercial clients throughout Central Iowa. ReadyClean stands behind our customer experience first approach. We are committed to providing a fantastic customer experience by always being courteous, professional and reliable. Some of our cleaning services include: house wash, roof wash, window cleaning and pressure washing. If you need it cleaned, call ReadyClean. ...

Aaron was very friendly and professional. The roof and gutter cleaning was very easy to set an appointment for and he arrived on time and completed the job very quickly. Communication was great as was the price. I would use them again and recommend the company.

Thank you for the positive review [Member Name Removed]! We appreciate you choosing us to help you with your gutter cleaning project.
5.0

It was great! I worked with Aaron the whole time and he did the cleaning himself. He was super professional and personable. He uses square space, so texted me the estimate, everything was laid out and clearly specified on what he was going to do. He communicated with me every step of the way. He even texted a reminder the day before and when he was on his way over! Aaron was on time for the job and done early! His price was in the ballpark for the estimates I got, a little on the higher end of that range, but it was totally worth it, he did a great job and made it painless! We had some lights hanging on the back deck that he worked around with his ladder like a pro. Very impressed! I would definitely use ReadyClean's services again in the future!

Description of Work
Clean our gutters on a two story house, about 150 linear feet.

Company did a great job. I appreciate the prompt service provided.

To say ReadyClean was professional and knowledgeable would be an understatement. In my opinion trust is a must when you have other people working on your home. This trust with ReadyClean was established Immediately. There were no hidden costs or surprises when it came time to pay. The total cost was almost identical to their original bid. Overall, very efficient company all around. I would highly recommend ReadyClean to my friends and family.

Thank you for those kind words! We appreciate you choosing ReadyClean Exterior Services for your exterior maintenance and cleaning needs.
5.0

Great experience. The technician was very prompt and polite! My house looks cleaner than the day I bought it! Would definitely recommend this company to others.

Technician was very prompt in follow up after I initially scheduled my home to be cleaned. Aaron went over in detail his entire process from protecting my outlets to presoaking all on my landscaping to ensure nothing was damaged. Aaron arrived on on timely and quickly and effectively cleaned my home. All the years of dirty and grime were completely gone when he was done. After finishing, he recommended I get my gutters cleaned as well. He had taken some photos to show me how compacted they were and explained how this could lead to more serious issues if not taken care of. He was able to get them cleaned for me that same day!! Great company and will happily use them again

Thank you [Member Name Removed] for trusting ReadyClean Exterior Services to do your house wash and window cleaning. Your home is looking great for the spring season!

We provide a good price for our services. We are a starting business trying to grow. We will travel if needed. We get things done fast so it saves both of us time and money.  …

MacPro Restore is a Cleaning and Restoration company based in West Des Moines, IA. We specialize in a wide range of interior and exterior services including cleaning up after a disastrous catastrophe. We are here to assist you with any situation ranging from general home and business cleaning services to Insurance claims. Our team of specialists have the training, certifications, and equipment to get you back up and running quickly. We are obsessed with improving your indoor and outdoor living spaces. We use processes that are safe for your family and loved ones. Our cleaning processes follow the most stringent guidelines of the IICRC, RIA, and the PWNA. Contact us today for a no obligation assessment and advice.  …

ReadyClean Exterior Services is currently rated 5 overall out of 5.

No, ReadyClean Exterior Services does not offer eco-friendly accreditations.