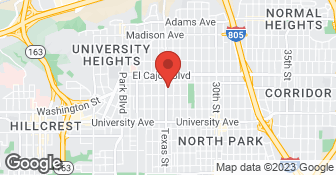 The goal of our business is not just to refinish your bathtub or counter tops, it is also to provide you with an excellent customer service experience, that will leave you amazed and exited with the final product. Our family has been in this business since 1986. In 2001, my father and I established our own refinishing business with a new and improved way of refinishing tubs. Over the years there has been a lot of products for refinishing tubs, which have been proven to be defective. We searched for the best refinishing material out there, so we can provide a long lasting finish to our clients fixtures. Our acrylic polyurethane products are the leading manufacturer of bathtub, tile, countertop and kitchen cabinet refinishing paints and coatings. We have been successful in establishing trust with many apartment management companies, contractors and residential clients. With the help of God i know that we can be the leading refinishing company in San Diego

They showed up about a half hour late and reviewed the work to be performed. They had given me a quote over the phone based on my description of the job to be done. They adhered to the phone quote and immediately began work. They laid down drop clothes in the hallway and the bath area to protect my floors. They removed all loose items in the bath (curtains, towels, pictures, etc.) that I had not already removed. (There were only a couple of things I had missed.) They removed the drain cover and overflow cover from the tub. They sanded and repaired the surface. They masked off the surrounding tile, walls and fixtures. Since it is a very old house there was a lot of surfaces to cover. They sprayed the tub with the new finish which has a very strong odor. Since they did not want any dust to settle on the finish while it was drying, the windows and doorway were kept closed for 24 hours. I had to place an old towel along the base of the door to prevent the smell from over taking the house. Even with that you still have to put up with some smell until the next day. If you are sensitive to chemical odors, it may be wise to plan on spending the night at a friends. The entire procedure took about three and a half hours. They cleaned up the materials that were in the hallway (tarps, compressor, etc.). They were scheduled to return the next day to finish up, but had to wait till the following morning due scheduling problems we both had. The final caulking, polishing, re-installation of drain covers, and clean-up took about an hour. The job went very close to plan and the tub looks brand new but in an eighty year old house. This was exactly why I wanted.

Description of Work
Refinished a cast iron white tub that was approximately 80 years old. The condition was not bad, but the surface was dull. tarnished and rough feeling. There were a couple of small rust stains that were beginning to show through. They masked off the area, prepared and primed the surface, and applied a white finish coat. They also polished the finished surface and silicone caulked the tub.

First, they were courteous, reliable, professional and outlined what they do and how they do it in language that a lay person could understand. Second their work was superb. We used a granite finish for the tile surrounding the tub which came out beautifully. Our tub was severely damaged. They fixed the tub, removing all cracks and rust. They then finished the tub in a white porcelain finish. The tub looks great!!! The soap dish in the tub was cracked. They replaced the soap dish, which they did not have to do and did it without being asked or charging us. They left the bathroom neat and clean when they finished. I will use them again for other projects. I recommend them to anyone who wants a quality job at a very reasonable price.

Description of Work
He refinished tile surrounding our tub and refinished the tub itself.

Upon entering the premises, the first thing they did was lay down canvas to protect the flooring that led to the bathroom. Inspected the tub to ascertain the prep necessary to ensure the best possible paint job. Lionel discussed with me what he recommended and was open to anything I suggested. In the end though I was confident that he knew the best course to take and let him do his job. His father taped and prepped the tub for painting. Everybody knows that you're only as good as the prep. Lionel did the actual painting and clean up. I was very happy with the end result as now I had a white shiny tub again.

Description of Work
- protected flooring that led to the bathroom - determined level of work necesary to prep the tub - taped area surrounding tub - put plastic on the other fixtures in the bathroom - removed tub overflow cover - sanded in and around tub - prepped tub with a solution for best paint adhesion - painted tub - removed and cleaned up everything they had brought in to do the job.

The guy and his father are in partnership together. I found them both to be very knowledgeable in their trade. The quality of their work was outstanding.

Description of Work
They refinished my bathtub and kitchen sink.

Our goal at Elements Design & Remodel is to make your home a haven. We work with you to create custom design solutions that are personalized for your individual needs, taste, and style. Yes, we will share our portfolio with you so that you can see our quality, craftsmanship, and completed design but we approach your project from square one designing a remodel that is unique to you!  …

Olam Stone Tile is an owner operated business, that specializes in bathroom, kitchen, interior/exterior flooring, fireplace, etc. With over 10 years of experience, Olam Stone Tile is dedicated to the integrity of work and relationship with its clients.  …

AAA Bathtub Refinishers is currently rated 4.8 overall out of 5.

No, AAA Bathtub Refinishers does not offer free project estimates.

No, AAA Bathtub Refinishers does not offer a senior discount.

No, AAA Bathtub Refinishers does not offer warranties.