How to Identify Carpet Beetle Damage

Carpet beetles aren't just creepy and unwanted guests: they can also inflict a lot of damage

You love guests, but not if they have six legs. Unfortunately, if carpet beetles have invaded your home, it doesn’t take them long to set up residence and cause problems. To get rid of the creepy crawlies, though, you need to distinguish carpet beetle damage from other kinds of damage, such as the tell-tale gnawing of clothes moths. We’ll show you how to spot the signs that those pesky carpet beetles have infiltrated your house before they cause too much damage.

What Is a Carpet Beetle?

Carpet beetles aren’t just your run-of-the-mill nuisance. Unlike most household insects, they’re not seasonal. Instead, in the comfy conditions of your home, these furry little critters can thrive year-round.

They’re also pretty crafty. They can enter your home pretty much through any nook or cranny, but especially at gaps in window frames and exterior doorways. They’re known to hitch a ride on clothing fresh from the laundromat or flowers fresh from the garden!

And once inside, they can take up residence and begin to feed pretty much anywhere and on anything, from clothing and carpeting to food items. They can even fly (yes, fly) right through open windows and doors!

The critters are only about one-eighth to three-sixteenths of an inch, and they can look like dark beetles or fuzzy worms, giving the larval forms their distinctive name, “woolly bear.”

But as diminutive as these creatures are, they have a boundless appetite, especially the larvae, which have a particular taste for your clothes, carpets, rugs, blankets, and other household fabrics. And they even like to feed on (gulp) human skin cells. 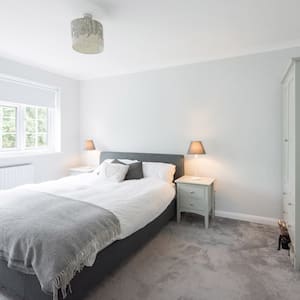 Everything You Need to Know About Carpet Beetles

How to Spot the Signs of Carpet Beetle Infestation

Look for the Traces

Carpet beetles tend to prefer dark, secluded spaces in your home. And that means that your home may already be wildly infested before you even know they’re there.

Because of that, you’ll want to be on the lookout not necessarily for the bugs themselves, but for their traces. Carpet beetle larvae will shed their outer layer when they reach maturity, so look for signs of those discarded husks, especially around carpets, rugs, and bedded. You may also notice tiny dark spots, which may be—brace yourself—fecal pellets.

Effects on People and Pets

It’s not just that carpet beetles can leave some unwelcome traces in your home, but they can also cause a lot of discomfort for your family and your pets. Carpet beetle larvae have spiky hair and an almost caterpillar-like body, and those hairs can be highly irritating to humans and animals, irritating the skin, eyes, and respiratory tract.

Damage to Fabrics and Upholstery

Probably the most significant damage carpet beetles cause is to your household fabrics. Wool, leather, and animal fibers attract beetles, but no fabric is truly safe from the dreaded carpet beetle. And, unlike the pinprick holes that clothes moths and other pests may leave in your fabrics, carpet beetles tend to eat massive holes in your material, often leaving them unsalvageable.

Because carpet beetles reproduce so quickly and because they’re so good at hiding themselves, if you notice their traces or find large, unexplained holes in your fabrics, odds are good you already have a carpet beetle infestation.

If that’s the case, you’re probably not going to be able to get rid of them on your own because these critters are stubborn as well as crafty. Instead, to get rid of carpet beetles, you will probably need to call in the services of a professional exterminator.

In general, pest control services will cost you between $200 and $600, depending on the extent of the infestation and the treatment you and your pro choose for your home. But reaching out to your local exterminator today can spare you a lot of hassle, not to mention untold amounts of money replacing your clothing and carpeting tomorrow! 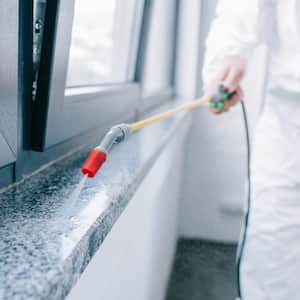 Everything You Need to Know About Pest Control Service Costs