The Many Sides of Living in an Octagon-Style Home

Architectural enthusiasts—especially those with a flair for the Colonial era—consider an octagon-style house a true find. With only a handful left standing in the U.S., this eight-sided abode took off during a brief window in the 19th century when home builders saw octagons as the home shape of the future.

Whether you're wondering if you technically live in an iconic octagon house or have a curiously shaped house in your town, here's what you need to know about the rare style.

What Is an Octagon House?

It may sound wild, but yes, an octagon house does indeed have eight exterior walls, all the same length and height. Try not to confuse these with houses that happened to have octagonal features, such as towers and cupolas. The octagon style refers to the home's main structure.

Prominent only in the middle of the 19th century, the house featured a range of common styles from the era, including Victorian, Colonial, Federal, and Italianate styles. The architectural style appeared in houses, schools, train stations, and government buildings across the country, but mainly in the Midwest and Northeast.

A Bit of Octagon House History

Octagonal houses flourished in the U.S. between 1850 and 1870 after architect Orson Squire Fowler published his 1848 book, A Home For All. He argued that symmetrical, eight-sided homes—nearly as close as he could get to a circle with the building materials of the day—offered the ideal square footage, ventilation, heat retention, natural light, and structural stability. All in all, Fowler celebrated the innovation as a means to a healthier way of living.

After 1865, the trend significantly declined, particularly because only a few thousand popped up during the 15-year period.

Keep in mind that octagonal structures became popular many times before Fowler's movement. You'll spot octagonal buildings in religious structures in both the West and the East as well as early-American Quaker schools in Pennsylvania.

Main Features of an Octagon House

Because the shape and practicality of the home was the main focus of Fowler's instructions, designers had free reign to add personal touches to the homes. Some featured round cupolas, wraparound porches, and intricate designs indicative of Victorian or Greek Revival styles.

The vast majority of octagon houses, however, featured a few common details:

When it comes to roofs, curb appeal isn't everything

Where You'll Find Them Today

There are fewer than 100 original octagonal houses from the 19th century left today. Prominent structures you can visit include an octagonal tower on Roosevelt Island in New York, the McElroy House in San Francisco, and The Whippany Company Store in Scarbro, West Virginia. Perhaps most notably, you'll spot eight sides at Thomas Jefferson's estate Poplar Forest.

Octagonal homes made a few brief comebacks both in the 1970s and in recent years, particularly for modern buildings hoping to showcase 360-degree views. When you do spot a newly built octagonal house, its novelty shape is often part of the conversation-sparking appeal.

The Pros and Cons of Living in an Octagon House

While the original octagonal houses served their purpose—plenty of room for windows and a sturdy structure against stormwinds—they're not always the most practical homes to live in today. Here are some things to know if you've just moved into either a historical octagonal design.

Pro: You Own a Rare Piece of History

You can either see this as a pro or a con depending on how you look at it—but it's probably a bit of both. On one hand, you own a structure that represents a very specific and very unique moment in architectural history. Not only can this be a point of pride at your housewarming party, but it could increase your home value as well.

On the other hand, a mid-19th-century home will likely come with local restrictions when you need to make upgrades. Restoring a historic home often requires approval from a local board as well as the help of a highly experienced contractor familiar with the materials and home style.

Traditionally, however, interior rooms in octagon homes narrowed at the center, or were split up in irregular, asymmetrical shapes. Designers added small rooms in the extra square footage such as pantries and odd closets. Because of this, you may need to think twice about where to place your furniture and kitchen appliances. 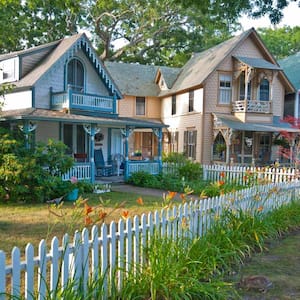 Historic Home Renovations Guide: Everything You Need to Know

Despite the necessary upgrades you need to make with all historic homes—electrical wiring, plumbing, and heating systems, for example—octagonal homes featured their specific architecture for a reason. You'll enjoy wall-to-wall natural sunlight from the surrounding windows, plenty of airflow, and a low ceiling to keep in heat in the winter. The wrap-around porch—which truly wraps around the home—isn't so bad either.

And since so many designers took up Fowler's suggestions, you can enjoy the unique details of Colonial and Victorian homes while still getting the perks of an eight-sided building.

Adding a home office, guest bedroom, or living room extension is not the easiest undertaking for an octagonal house. Be sure to work with a highly trained local home builder that can envision where an extension works best on this symmetrical structure. In addition to local historical requirements, it's complex to add more space without sacrificing the aesthetic of the shape.