Window films have always been seen as a budget-friendly alternative to heavy drapes and curtains. And while that hasn’t changed, your options for decorative window films have dramatically exploded. Today, window films can be used as a fab finishing touch to elevate your space.

If you’re looking for a way to make a visual impact with window film but aren’t sure where to start, we’ve curated a list of some stunning decorative window film ideas. So, keep scrolling; inspiration awaits.

1. Get Inspired by Nature

While most people think of window film as a way to add privacy to their spaces, window films can be purely decorative too. This decorative window film by Hannah Nunn does plenty to add interest to the space.

Nunn’s inspiration for the design came during the first major lockdowns in the U.K.

“It was in the springtime, and the hedgerows were just beginning to come back to life,” says Nunn. “On my daily walks, I would watch them unfurling and then go home and draw the plants that caught my eye.”

Photo: Rhythm of the Home

While working on a few projects with decorative window film, Stephan and Maegan Bucur of Rhythm of the Home found that they like using films with a kaleidoscope effect:

“Most of the projects involving mosaic window films need some sort of condensed background where the light can shine on. For that, we recommend wall art, including pictures of loved ones, portraits, or paintings that can benefit from that divergent lighting.”

3. Try a Splash of Color

Window films have come a long way from frosted white, so try a splash of color with these window films by Purlfrost. We think this one would look pretty sweet in a nursery or playroom. 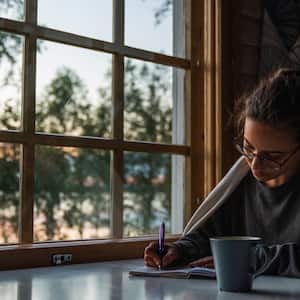 Should I Use Low-E Glass or Window Film to Block Out the Heat?

While low-E (low-emissivity) glass windows are more expensive than window film, they often provide a better return on investment when upgrading windows in your whole house

4. Go for an Etched Glass Effect

No one ever said that privacy film was limited to exterior windows and doors. After all, there are plenty of interior spaces where privacy is non-negotiable—like this stunning door that leads to an en suite bathroom.

Kiresten Harrison @kh_decor wanted to separate the space without losing the natural light that poured in from the big windows in the bathroom. We’d say mission accomplished.

“For anyone wanting to try something like this, my advice would be to just go for it,” Harrison says. “Sometimes trying something new can be a little scary, but it can also be fun and exciting to learn something new. And that feeling of pride that you get when you’ve finished your project and it turned out so beautifully is a wonderful feeling.”

Glass sidelights are a great way to frame an otherwise boring door. They allow you to add style to your entryway, and they let in tons of light. The only problem is they also let in prying eyes. The slim and unique shape also adds to the challenge, but window films are an excellent way to keep things under wraps.

For these window films, Christine Petty, owner of Grafix Art, worked with her client, who is originally from Tonga. With the client's guidance (and to her delight), Christine produced a Tongan design using elements from Tapa clothes.

Mudrooms don’t often make it on the list of priorities for most homeowners, but with so much traffic and activity, it’s certainly worthy of a weekend project or two. This decorative window film by Create Your World features a bamboo pattern on a glass door that elegantly elevates the space.

Plus, it offers plenty of privacy without the complexities of soft furnishings that can get in the way or get dirty.

7. Elevate With a Stained-Glass Look

Stained glass is a dynamite way to elevate your space, but if it's not in the budget, you could try this colorful update on stained glass by Purlfrost that gives you the same effect without the hefty price tag. 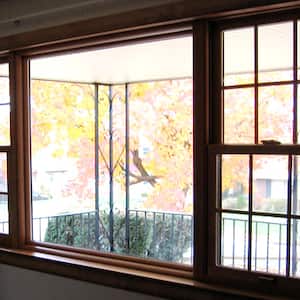 Plastic window film can provide additional insulation for your home.

Deep sill windows are great for plants, flowers, books, and other decorative elements, but if you need privacy, drapery doesn’t quite cut it. This frosted window film by Create Your World is an excellent way to add privacy without detracting from the space.

9. Give Your Bathroom a Sleek Update

Whether you’re going for industrial sleek or farmhouse chic, this privacy film by Purlfrost might be the update you needed but couldn’t quite put your finger on. This frosted window film adds plenty of privacy without compromising style. And as an added benefit, everyone will know where the bathroom is.

10. Put the Finishing Touch on a Period Property

Working on a period property? Whether you’re looking for Victorian-inspired, art deco, or art nouveau, these decorative window films by Purlfrost are perfect for tszujing curb appeal without the cost of replacing the front door or the existing glass.