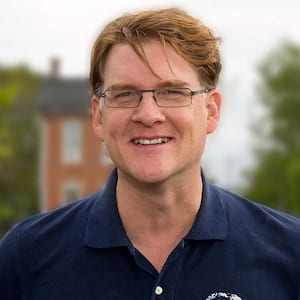 This couple had lived in their historic home only a week when they discovered a gas leak.

Lindsay and Will Arvin had just moved into their historic home a week before when they discovered the bizarre cause of a natural gas leak.

“We knew that there would be little issues here and there with such an old house,” Arvin said. The young couple’s painted white brick home was built between 1880-1890 and sits in historic Woodruff Place, just one mile east of downtown Indianapolis. “When we moved in, the people told us about this fireplace on the second-floor bedroom and that you’d start to smell gas if this pilot light goes out, so they told us to be sure it’s lit.”

A few days after they moved in, Arvin recalls arriving home at about 4 o’clock in the afternoon. “I went upstairs it was like pow! It felt like getting hit in the face with that gas smell."

The couple immediately evacuated the house along with their two dogs and two cats.

“One of the first things I did when we moved to this new area and a new house was to get an Angie’s List membership,” Arvin says. “So the first thing I thought to do was to hop on Angie’s List.” The Arvins hadn’t yet set up their Internet, so he called the number and requested some highly rated companies who handle gas leaks.

Although safety experts generally recommend reporting leaks directly to the local gas utility company, Arvin had managed to reach Hope Plumbing almost immediately. After explaining his predicament, the company called him back and had dispatched Roger Kirby to the scene, even though it was late in the day. “They said he was on his way home and was going to swing by and take care of it all,” Avin says.

When he told Kirby about the pilot light, the plumber found it puzzling and asked Arvin to show him where the flame was. “I pointed, and he said, ‘That’s the leak!'” Kirby explained that the gas fireplace unit did not even have a pilot light. The previous owners evidently mistook the slow leak for a pilot and put a match to it, which burned off the escaping gas. “They set the leak on fire.’” Arvin repeats incredulously, “They just lit the leak!”

Kirby shut off the gas to our house. “He pulled all the junk out of there, and he put a permanent cap on the fireplace for $120,” Arvin said. “After he put the gas back on, he went down and lit the pilot light to the furnace for us. The guy couldn’t have been nicer. He explained everything, he was patient.”

Arvin was relieved that Hope Plumbing had fixed a dangerous defect in their new home. “It was a lifesaver for sure.”

If you smell gas in your home:

• Leave the area immediately and call your natural gas utility.

•Do not operate any electrical device or appliance, including cell phones.

• Do not smoke, use an open flame, matches or lighters.

• Do not try to locate the source of the leak.

• Do not try to shut off the supply or gas-fired appliances.