Keep Sewage Out of Your Chicago Basement

After a major rain, Julia Bell and her family woke up and found more than 2 feet of water in their basement. “It was black, disgusting water, leaving smelly black sludge in its wake,” the Elmwood Park member says. “My furnace was smoking, and I saw a box of Huggies float by.”

The water entered her basement when the sewers overflowed and her basement drain line backed up during the summer storm, pumping neighborhood sewage water directly into her basement. Prior to that, she thought she was safe. “The previous year, we had survived a rain that had been deemed a 100-year flood,” she says. “But now, the 100-year flood is the every-July flood.”

Afterward, she and her family investigated several options available to homeowners to control flooding, including an overhead sewer, which prevents backflow by rerouting basement pipes above street level, or an exterior flood control system, which involves installing a pit in the yard for overflow, with check valves and an ejector pump to ensure the water only goes one way.

She selected an overhead sewer, which represented the more complex and expensive option, but she paid less since she was already tearing out drywall. “This wasn’t a fun repair, but I have absolute confidence that I won’t have to worry during the next ‘100-year rain,’” says Bell, who hired highly rated Midcity Plumbing of Franklin Park for the $8,300 installation.

Highly-rated plumbing and sewer contractors around Chicago say Bell acted wisely to protect her home, as sewer backflow becomes more common with more severe rains. “When we got hit last April [2013], we had a lot of homes flooded that had never had a sewer backup before,” says Ruben Borjas, owner of highly rated RB Plumbing & Sewer in Skokie.

Robert Heath, co-owner of highly rated Lincoln Sewer & Drainage in Chicago, says the likelihood of having to deal with overflow varies from neighborhood to neighborhood and village to village, depending on factors like sewer size and how well the municipality maintains the system.

“Some of the suburbs never planned on the communities getting so big when they installed the infrastructure 80 years ago,” he says. “Every major storm is worse than the one before.”

Dan Cox, owner of highly rated AHS Plumbing and Sewer Repair in Wheeling, adds that professionals should check and clean exterior flood control systems regularly, adding hundreds of dollars in annual costs. He says other options include a $5,000 mechanical valve system that completely blocks off the sewer when necessary and comes in handy when the power goes out.

“It needs to be opened and closed by hand, and you can’t use any water when it’s closed, but if you’re in the middle of a giant storm or going away on vacation, you can turn that crank and have complete peace of mind,” he says.

Both flood control systems and overhead sewers require steady electricity to work. However, Borjas says an overhead sewer will still prevent backflow without power as long as you don’t turn on any water sources in the basement, such as a toilet or washing machine.

Though the renovations often carry significant costs, some municipalities help defray the expenses. Bell says she received $1,500 from Elmwood Park’s Home Flood Proofing Assistance Program for her overhead sewer, and Cox and Heath say some suburbs reimburse even more of the cost. Check with your municipality for details.

The city of Chicago and most municipalities require contractors to obtain permits and submit plans for preapproval when constructing flood control or overhead sewer systems. In some cases, depending on locality, the work also requires an electrical permit, since it includes working on both the sewer and electrical lines.

Plumbers urge homeowners to pay close attention to this process and make certain their contractors provide proof they’ve pulled the correct permits. “As the homeowner, you’re ultimately responsible for the work done in your home, and you’re the one the village will come after and attach liens to your property,” Cox says. 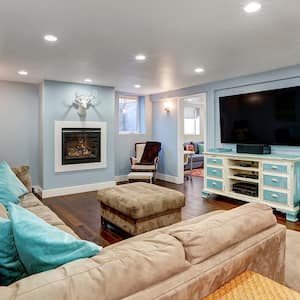 A Complete Breakdown on the Cost of Waterproofing a Basement