What Is a Bladeless Ceiling Fan, and Is It Really Worth the Price Tag?

Imagine feeling the subtle cool breeze of a ceiling fan, but then looking up and not seeing a blade in sight. While many homes still come equipped with traditional ceiling fans, some homeowners are opting for bladeless ceiling fans. Bladeless ceiling fans offer a modern alternative with hushed-quiet silence. But are these higher-priced fans worth the cost, or are they a trend in room-cooling tech?

What Is a Bladeless Ceiling Fan?

The name "bladeless fan" is a bit deceiving, but we see where the designers were coming from when they named this device. Bladeless fans use blades to move air, but the motors and small blades are hidden out of sight and work differently than traditional types of ceiling fans.

Launched first by Dyson in 2009, bladeless fans pull air into the machine's base through a series of well-placed motors with small blades. Then, the air shoots through an intricately designed tube, which is the visible part of the fan. Aerodynamics within the machine accelerate the speed of the air from the base and the surrounding tube itself. The result? A consistent flow of air without the rush of wind that comes with a traditional ceiling fan model.

The technology took off as the designers worked out early kinks—such as strange noises and low efficiency. You can now find bladeless fans in everything from small tabletop desk fans to ceiling fans with elaborate chandelier lighting.

How Much Do Bladeless Ceiling Fans Cost?

Bladeless fans hit the market over ten years with the release of the Dyson Air Multiplier. Now that there are far more competitors on the market, you'll find bladeless ceiling fans starting at around $200. Higher-end models, especially those with complex lighting fixtures, constructed from unique materials, or featuring Bluetooth technology can cost upwards of $600.

Keep in mind that the cost of labor to install a ceiling fan can run anywhere from $50 to $600, depending on the complexity of the fan and whether you have existing electrics in that part of your ceiling. 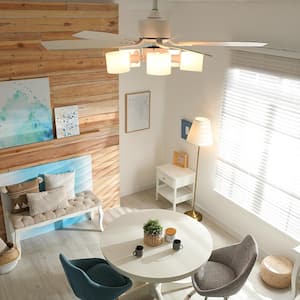 How Much Will It Cost to Install a Ceiling Fan?

Advantages of a Bladeless Ceiling Fan

Here are the top perks of bladeless ceiling fans to consider before making the switch.

While the original models had a bad reputation for making a low hissing sound, this is mainly a thing of the past. High-quality bladeless ceiling fans should only make a low, smooth, and, most importantly, consistent sound when turned on. Compared to the clack-clack-clack of a traditional ceiling fan that needs a good cleaning, bladeless ceiling fans can seem much less disruptive, especially in a bedroom.

You Can Lower Your HVAC Energy Use

Your HVAC uses the largest percentage of energy in your home. Any tool that can help circulate air can help you adjust your thermostat to a more cost-saving setting.

The Department of Energy encourages the use of ceiling fans overall, but bladeless fans take electricity savings a step further. Let's look at the unique bladeless technology we mentioned above. Instead of pushing around the hot air in the top of a room—such as with a traditional fan—a bladeless design pulls in air and recirculates it faster than it came in. The cooled air spreads throughout the room faster, more evenly, and without using as much wattage.

More specifically, ceiling fan efficiency is often measured by CFM/W, or cubic feet per minute per watt. Even Energy Star chooses its top traditional ceiling fans this way. Bladeless ceiling fans have very high ratios of CFM/W, producing around 5,000 CFM at a very low wattage—though this depends on whether the fan has a light as well. In other words, most models are on par with what's considered highly energy-efficiency by the DOE.

Since most of the magic happens inside the bladeless fan, designers can streamline the outside of the structure. For example, you can choose from minimalistic bladeless fans with basic black wrought iron or metal frames, or even opt for a model with built-in lighting.

Perhaps most notably, bladeless fans are far more inconspicuous than traditional ceiling fans. You won't have to worry about the design of the extended blades going out of style or wearing down over time. In fact, unless you feel the slight breeze coming down from the fixture, you may not even realize it's a fan at all.

If your kids have been dreaming of bunk beds, the last thing you want is extended ceiling fan blades coming a bit too close to their sleep zone. Bladeless fans offer the same cool breeze without the space typically needed for the extended arms of the fan. This perk also applies to other rooms with low ceilings, such as basement home offices or attic rooms.

Not sure if a bladeless fan is worth the trouble? Here are some cons to consider before installing a prominent fixture.

More Expensive to Buy and Install

The most significant con of bladeless fans is the price. Bladeless ceiling fans are still relatively new, so expect higher costs than traditional blade fans. As we mentioned above, you can now find models ranging as low as $200 to $600 and up. Some contractors may also charge more to install a bladeless fan, especially if it requires unique wiring or installing a new switch. Be sure to work with a professional familiar with bladeless fans, as well as their placement and hookup requirements.

The one caveat to the higher upfront cost is the money you can save on utilities over time. If you use the room frequently and are looking to reduce HVAC use, the higher price tag could balance out.

Some Models Create a Hum

The calming quiet of a bladeless fan did make it on our pro list, but you should know that these fans create a unique sound of their own. The consistent flow of air typically makes a low hum. To some people, this noise could be irritating when trying to sleep.

We recommend checking out your desired model of bladeless fan at your local hardware store to review the noise level. "Quiet," after all, is relative depending on your sound preferences.