Gas fireplaces are convenient, but sometimes there's nothing like the nostalgic crackle of burning wood

Over the past few years, gas fireplaces have become more popular than wood-burning fireplaces. In 2021, gas fireplaces rank among the top 10 home upgrades in the United States, but there’s still something to be said about curling up next to a crackling fire as the scent of burning wood permeates your home. You don’t get that with gas, which is why some homeowners convert their units.

Converting a gas fireplace into a wood-burning one is not as easy as throwing in some logs and hoping for the best. It requires careful planning—if you can even do it at all.

1. You Can’t Convert Some Gas Fireplaces

Before you convert your fireplace, you have to make sure that you can convert it. Some gas fireplaces—particularly the factory-made units popular in newer homes—were never meant to burn wood. They are only gas appliances; you can’t convert them.

Instead, you’re looking at a full replacement, which costs about $2,330, according to HomeAdvisor. If you have a ventless gas fireplace and don’t have a working chimney, building a wood-burning fireplace could cost as much as $30,000. It’s not cheap, but smoke from the burning logs would pour into the room if you tried to light a fire without a vent. Nobody’s lungs want that.

That said, many gas fireplaces can burn wood. You’ll commonly see this in older homes with gas-burning logs installed in traditional fireplaces to make them more accessible for homeowners who don’t want to chop wood constantly. You can convert these fireplaces. 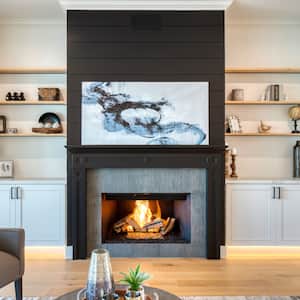 How to DIY the Shiplap Fireplace of Your Dreams

Learn how to execute this red-hot design trend

2. You Can’t Start Work Until You’ve Inspected the Chimney

Some gas fireplaces are ventless, but all wood-burning fireplaces need proper ventilation. For this reason, it’s a good idea to get your chimney inspected before you convert your fireplace. It may surprise you to find that it needs some work, especially if you haven’t been using or maintaining it.

It’s not uncommon for inspectors to condemn chimneys; sometimes, part of the chimney has been removed or built incorrectly. Other times, like with old masonry fireplaces with clay tiles, things get broken or damaged. A contractor might be able to patch things up, or they might have to re-line the flue with stainless steel. Either way, you must resolve the issue before you can convert the fireplace.

3. The Fireplace Conversion Process Is Straightforward

Once you start messing around with gas lines, things can quickly become dangerous. It’s best to hire a contractor to convert your fireplace unless you really know what you’re doing. Luckily, converting a gas fireplace into a wood-burning fireplace is a lot easier than the reverse (which costs an average of $3,000 and requires gas line installation). If everything’s in working order, a contractor only has to:

This typically costs anywhere from $150 to $300—but that’s only if your fireplace is in tip-top shape. Chimney repairs add up. While fixing a single tile in your flue probably won’t cost more than $200, relining the whole thing could cost up to $5,000, according to HomeAdvisor. A licensed contractor can give you the proper estimate. 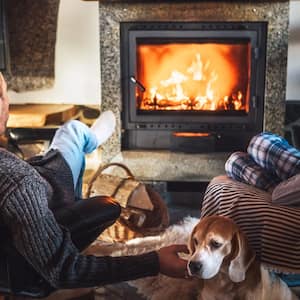 How Much Does It Cost to Convert a Wood Fireplace to Gas?

According to the National Fire Protection Association, two in five fires caused by home heating equipment involve units that burn solid fuel—like wood-burning fireplaces and stoves. Creosote buildup is actually flammable, and it can ignite inside a neglected chimney, potentially leading to dangerous flames.

When ventilation fails or burning creosote leads to particularly fervent flames, it can affect your health. The two big potential dangers are carbon monoxide poisoning and smoke inhalation. All fireplaces carry a carbon monoxide risk, but according to the Environmental Protection Agency (EPA), smoke from wood-burning fireplaces can increase the likelihood of respiratory illnesses, aggravate heart and lung disease, and trigger asthma attacks.

Proper maintenance will help prevent these dangerous issues. After you convert your fireplace, you should have it inspected yearly. If you didn’t already, it’s also a good idea to put carbon monoxide detectors throughout your home. 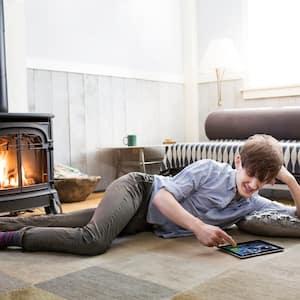