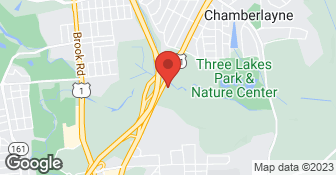 Becoming the premier choice for Richmond tree removal and tree care services is something we have been quite proud of during our over 30 years in business so far. Although C.S. Flournoy began with a focus on stump grinding over three decades ago, the need became apparent quickly for quality workmanship in all areas of tree care service, so we answered the call. Since that time our Richmond Tree Removal Company has grown exponentially and offer a variety of services; in fact we even offer professional snow plowing and snow removal for the Richmond area. Our team is made up of fully trained, skilled and experienced members, including a Certified Aborist on staff. Aside from the basic licensing and insurance, we also have taken care of specialty needs like Certified Pesticide Application. We are ready, willing and beyond capable off taking care of any job you have, no matter how big or small. We take great pride in our ability to also offer the best in a rapid response time and safe quality work, all at beyond reasonable rates. We also welcome insurance claims and can help assist you through the process. Contact our Richmond Tree Removal Company today so we can get started on whatever you need done.’ ...

Total overall experience was horrible. From the estimator talking down to me, from them not showing up, I had paid for the work in full at the office, then a month later they asking for payment. When I had already paid them. I will never used them again .

[Member Name Removed] C S F wants every customer to have a good experience. I would like to explain that statements are mailed out automatically and the information must have crossed in the mail. We are truly sorry for the inconvenience. I must ask though, according to my information the last time we did work for you was back in September 2011. Work was completed on September 27, 2011 and payment was received October 2011. We are just getting a review from you 9 years later, I do not understand?
5.0

The work was done as promised. I was very impressed with the professionalism of the crew.

Description of Work
Cut down a dead tree.

They were on time with start and finish of the job. The staff is wonderful.

It was prefect, they did it in record time. I cant believe it went as fast as it did.

Description of Work
I used C S FLOURNOY INC to remove a huge tree. That included the grinding of the stump and cleaning of the saw dust.

There was a lot of damage from the storm in June, not just with me. Danny came out and gave me a quote for everything for $775. Seemed pretty high to me, but I figured it was mostly because I was being particular about them not walking on the slate roof. They were unable to get out to get the branches off my roof within a reasonable amount of time- hey, I understand because it was a crazy time with lots and lots of trees down everywhere. However, I had a hole in my roof and the roofers needed access to the roof (sans branches) to at least make temporary repairs. Although it was not really their thing, the roofers (Davidson Roofing, who I highly recommend, by the way) pulled the branches off themselves. I called to get a new quote from CS Flourney since the MAIN REASON I had called them was now moot, and the office lady told me that Danny would adjust it appropriately and not to worry. By the time CS Flourney got out to my house, it was several days (over a week) post storm, and I and the roofers had piled all the branches and limbs into two easy to reach piles. I was away while they worked, but it could not have taken long since we had already done most of the work (there was one hanging limb that they removed- they did not get the other dead branches, and that one could have just been yanked on from the ground). I came home to find that they had moved my garbage can (that held all the frozen food that had spoiled while the power was out) away from the road, so the trash pickup didn't happen and the food was just rotting in the sun. Not only that, but they missed a large limb and did not clean up the piles well so I had to pick up all the pieces that would have damaged my mower blades and find something to do with them. Okay, kind of irritating but not a huge deal. THEN I get the bill for exactly the same amount as the quote that included getting the branches off the roof- which they didn't do. I assume it's a mistake, call the office, and they offer to take $25 off of the $775 bill. Are you kidding me? The guy doesn't even speak to me directly, I had to wait for a callback from the office lady after she spoke with him. I know he's busy- everyone was after the storm, but come on, justify your price. I call back AGAIN and same deal- this time they offer $50 off. I inquire as to whether I can call them to come get branches off my roof for $50 in the future, and they say no. I am definitely feeling taken advantage of by now. I finally get a call back from Steve, the owner. He tells me that I have one of the lowest bills they've seen since the storm and I should be grateful. SERIOUSLY what the heck, is he really saying they upcharged due to the storm? I see from other reviews that they have charged less for other jobs that involved quite a bit more work and point this out to him. His response basically confirmed that it's because of the storm. They have special storm pricing?? That's called price gouging where I'm from. They literally charged me $775 to chip some branches that I already had piled up for them. I'll give them this- I should have demanded a second quote. I regret that dearly, because had I known they would still be charging me this much for that, I would have told them to take me off the list. I would not have paid more than $200 at most for what they actually did, and probably not even that. I think it's WRONG WRONG WRONG to charge people more after a big storm, and I also think it's WRONG to assure someone that their price will be fairly changed to account for the change in work when they don't. I feel utterly cheated and taken advantage of, I am sorry that I trusted them to be fair and I wish I'd never called them. I have more tree work to be done and you can be sure I will not be calling them.

Description of Work
I had a few large tree limbs on my roof after a big storm that I needed removed, a few hanging branches, and many branches and limbs in the yard as well. I requested they remove the branches from the roof using equipment that allowed them to NOT stand on the slate roof. I also requested that they remove the hanging broken branches, and may as well throw everything in the chipper and leave the wood chips behind as I could use them for mulch.

Had a lot of roots in yard from a tree we had removed. Kelly came out and did a great job on the root removal. Hard working guy. Thanks

They did a great job. The yard looks better than ever. They also were diligent about clean up removing everything and some additional items that were in the yard. They also cleaned up leaves off the yard and deck. Great job at a great price.

Description of Work
Trimmed many trees around the house and cut down one tree.

From the start this was a great company to work with. I met them at the Richmond Home and Garden Show. They scheduled an estimate for me that day. Warner came out as scheduled. We hired them to remove two large Magnolia Trees and to sod our front yard. We live on a busy street with houses on both sides I was concerned with the removal they handled it with no problem. They were so professional. They showed up each day and completed the job in 3 days. Warner even came out to let me know how to care for my new sod. People that saw the work being done stopped by several times to get there number. I would not hesitate to hire them again for my backyard. Great company!!

Description of Work
We had them remove two very large Magnolia Trees along with removing the stumps and putting down sod in our front yard.

We were very impressed. I only spoke to one of the crew members (I think his name was Jeff and I really apologize if that's not right!), and he was very personable and professional. Overall a great experience and a great price, and we would ABSOLUTELY use them again and recommend them to anyone in need of tree service.

Description of Work
We had a fairly large maple tree with substantial dry rot located in a challenging location in our backyard. CS Flournoy provided us with an estimate very quickly. Along with the estimate, Warner also left photocopies of the company's insurance policy and license, and some testimonials from clients. We thought that was a very nice touch; customer service is extremely important in today's world and CS Flournoy does it right. Once we agreed to have the work performed, the crew came out within a couple of days. Very professional all around; the crew arrived by 9:00AM and made very short work of the tree (involved using a bucket truck to access the upper branches, etc., it was quite a process, and interesting to watch). They had every last bit of wood removed from our property within just a couple of hours.

Marshall’s Lawn & Landscape Inc is a full service lawn and landscaping company. We offer many services from fertilizer applications, yearly maintenance programs , mulching and much more. Give us a call or visit our website to schedule a quote .804-314-8924 Welcome to Marshall's Lawn & Landscape Inc., where service is ALWAYS in season. Whether you want to spruce up your yard for that upcoming gathering or create a professional, manicured look for your office building, we are your last and permanent solution. Marshall's Lawn & Landscape Inc., is a family owned and operated business located in Mechanicsville, VA. Since 2006, we have been providing full service landscape services throughout the surrounding areas, happily and efficiently. We offer year round maintenance contracts to ensure your property is looking its best all the time. Call and ask about our current discounted rates! Our company is based on the belief that our customers' needs are of most importance. Our entire team is committed to meeting those needs. We would welcome the opportunity to earn your trust and deliver you the best service in the industry.  …

Welcome to Mi Jalisco Tree Service LLC. We are a tree service company located in Richmond, VA. With over 12 years working in the tree industry, we have the experience and dedication to do the job right the first time! We guarantee your satisfaction, and we won’t leave until the job is done right. Call to schedule an estimate today!  …

C S FLOURNOY INC is currently rated 4.8 overall out of 5.

No, C S FLOURNOY INC does not offer a senior discount.

No, C S FLOURNOY INC does not offer warranties.